Why Squid Game is actually a critique of meritocracy 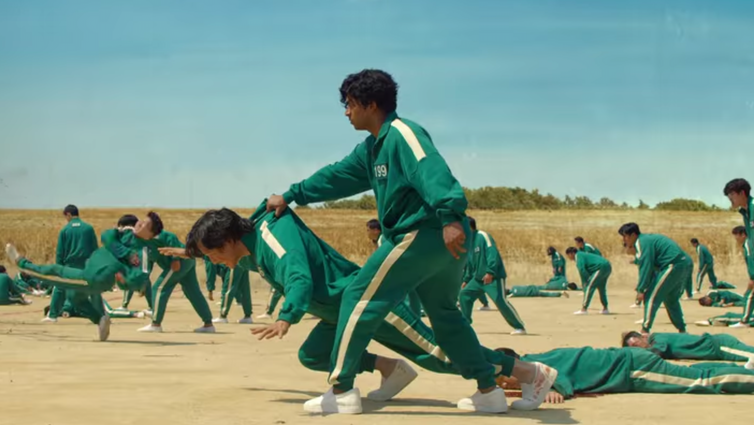 The programme follows 456 competitors through a series of lethal contests. At stake is a cash prize of billions of won, suspended over the contestants’ dormitory in a giant perspex piggy bank. The people playing the games are destitute and laden with debt. Some are suffering from gambling addictions, others are caught up in gang violence and some face the threat of deportation. This desperation drives them to risk their lives to win the fortune dangling over their heads.

Squid Game no doubt functions as a satire of material inequality in South Korea. The problem has reached a point where relatively radical policies are being considered by candidates for the country’s 2022 presidential election, including universal basic income and a comprehensive overhaul of the legal system.

But though Squid Game’s social critique most obviously aims at extreme inequality, its satire is most effective when it targets a principle that has served to support, justify, and perpetuate such inequality. Squid Game is perhaps at its best when viewed as a critique of meritocracy.

Meritocracy is having something of a moment as a subject of debate. A significant number of recent critical studies by sociologists, economists, and philosophers have focused on the role meritocracy plays in legitimising the levels of inequality we face today.

We have been sold the idea that a meritocratic society would be a place where our material wellbeing is determined not by class, race or gender, but by a combination of our ability and effort. Meritocrats believe in fair social competition, a level playing field, and rewards for those talented and industrious enough to rise up the social ladder.

But in a competitive society, not everyone can win. The dark side of meritocracy is that it justifies inequality on the grounds that the better-off have earned their position, with the implication that the worse off also deserve their lot. And when people are convinced that their society is indeed meritocratic, political resistance to inequality is much more difficult to establish.

Political promises of meritocracy peaked in the 1980s and 1990s, and have diminished since the 2008 financial crisis, along with the economic optimism that helped to make meritocracy plausible. Meritocracy nonetheless continues to haunt contemporary politics. Just last year, for example, Kamala Harris’s vice-presidential campaign included the assurance that everyone can “be on equal footing and compete on equal footing”. And some data indicates that a growing proportion of the public continues to believe that they live in a meritocracy.

The problem with past promises of meritocracy is that they have turned out to be either false, because we never really get meritocracy, or empty, because meritocracy doesn’t really give us what we hope for. Squid Game exposes both sides of this unhappy either/or.

The unfairness of false meritocracy

At the heart of Squid Game’s competition is a moral code that, according to the shadowy figure running the game, offers the contestants an opportunity unavailable outside of the game. In his (translated) words: “These people suffered from inequality and discrimination out in the world, and we offer them one last chance to fight on equal footing and win”.

Unsurprisingly, the reality of Squid Game’s competition falls short of its meritocratic ideal. The hope of a level playing field is undermined by the same social factors that corrupt competitive society outside of the game. Factions form; women are shunned; elderly players are abandoned.

The game’s only player from outside of Korea, Ali Abdul, is patronised, betrayed, and exploited. In the first game, he literally holds up Seong Gi-hun, the programme’s protagonist, in a stunning visual metaphor for the dependence of prosperity in developed countries on cheap foreign labour.

Not everyone has a fair chance of winning.

The violence of true meritocracy

But is the injustice in Squid Game really that the competition is unfair? Would the horror disappear if the competitors really were “on equal footing”?

Compare this with the polarised labour markets of countries like the US, where middle-income jobs have been replaced by a small number of high-earning roles for winners, and increasingly poorly-paid jobs for those left behind. In reality, even societies that have embraced genuine meritocracy such as the US have nonetheless generated few opportunities to win, while losing leaves tens of millions in poverty.

Squid Game is also a competition in which society’s poorest are forced into playing. Though the rules of the game allow players to opt-out at any time – they even allow for a democratic vote about whether to continue – the misery that awaits them outside of the game makes this no real choice at all.

Winner takes all, losers die, and participants have no choice but to play. Squid Game’s radical meritocracy is a caricatured version of the inequalities that have emerged in competitive society. But it also reflects, in only an exaggerated form, the dangers of both the false and the true meritocracies that currently trap millions.

2021-10-22
Previous Post: India’s COVID vaccine exports resume – but others must step up to vaccinate the world
Next Post: Ethereum: the transformation that could see it overtake bitcoin