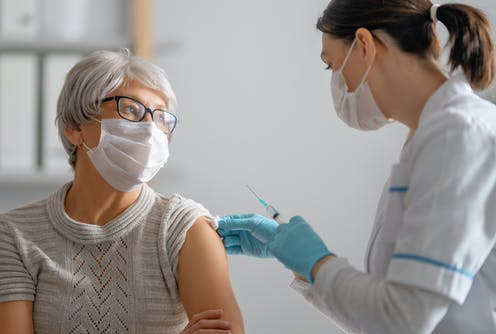 The Indian embassy in Iran recently celebrated the arrival of 1 million doses of Covaxin, a COVID vaccine developed in India by the pharmaceutical company Bharat Biotech. Bangladesh, Myanmar and Iran also recently received a million doses each of Covishield, the version of the Oxford/AstraZeneca vaccine produced by the Serum Institute of India, the world’s single largest vaccine producer.

These 4 million doses, delivered in early October 2021, were the first to be exported from India in more than six months. Dubbed the “pharmacy of the world”, India has the largest vaccine-production capacity of any country. It therefore has a massive role to play in vaccinating the world. However, up until recently the “pharmacy” has been closed to other countries.

Unlike most COVID vaccine producers, India began exporting doses through its “vaccine friendship” initiative – a diplomatic programme based around gifting vaccines to lower-income countries – the same week it began its domestic vaccination programme, back in January 2021. It was soon internationally hailed as a “vaccine superpower”. However, in late March exports ground to a halt, as India’s devastating second wave took hold and all resources were diverted towards its domestic vaccine programme.

In mid-May, the Serum Institute of India said it hoped to start delivering doses to other countries again “by end of this year”. This included resuming giving doses to Covax – the international vaccine-sharing initiative backed by the World Health Organization – upon which many low- and middle-income countries are highly reliant for supplies. In late August, the chairman of the Indian government’s National Technical Advisory Group on Immunization also forecasted that vaccines would start being sent abroad again in 2022.

So exports have resumed earlier than many insiders forecasted. The reason for this is the enormous progress India has made on getting cases under control and levels of vaccine protection up, as demonstrated by the milestone of one billion doses having now been administered.

While it took more than six and a half months for the first 500 million COVID vaccines to be given in India, the second 500 million were administered in just two and a half. This progress has seen India recently record its lowest COVID case levels in months. On October 17, Mumbai recorded its first day with zero COVID deaths in more than a year and a half.

What’s allowed India to get here so quickly, having been in such a bad position earlier this year, is its huge increase in COVID vaccine production. The monthly output of the Serum Institute – which produced 88% of the first billion jabs administered in India – has increased from 60 million doses at the peak of India’s second wave to 220 million doses.

Bharat Biotech – producer of the recent exports to Iran – has also increased its monthly output, although on a smaller scale: from 5 million to 30 million.

But the impact will be delayed

Although having now resumed, India’s vaccine exports won’t gain significant momentum until next year, according to recent statements.

The Serum Institute signed a major deal back in June 2020 to manufacture and supply the Oxford/AstraZeneca vaccine to Covax. However, such exports have not restarted yet, and the institute’s CEO, Adar Poonawalla, has expressed uncertainty over whether they will in October.

Last month, Poonawalla suggested that large volumes would be going to Covax by January 2022, and promised to have delivered a billion doses to Covax by the end of next year, one year later than this milestone was supposed to have been reached. The delay in regulatory approval for the COVID vaccine developed by Novavax, which the institute is also manufacturing, is an additional factor here.

Similarly, V.K. Paul, who heads the Indian government’s COVID task force, also placed greater expectations on 2022, saying that “a huge, huge availability of vaccines can be visualised for next year” rather than in 2021.

India still has a long way to go with its domestic vaccination programme, and so there is still considerable domestic demand for COVID vaccines, including, potentially, booster shots. On October 16 – five days before the billion-dose milestone – India crossed the threshold of fully vaccinating 20% of its population. Hundreds of millions of doses are therefore still needed to get the country fully protected.

Others must step up

So despite exports resuming, there appears little prospect of Indian-made vaccines boosting the vaccination fortunes of low-income countries until at least 2022. In these countries, just 2.9% of people are fully vaccinated and only 29.5 million doses have been administered.

For the last seven months, with India’s exports on hold, what’s been needed is for other countries and manufacturers to supply Covax. This is still the case.

When exports were halted, Covax immediately issued a warning that its deliveries would be delayed, such was its reliance on India. In September, Covax downgraded its 2021 supply forecast from 2 billion to 1.425 billion doses, reflecting its inability to have found sufficient alternative suppliers to India over the last six months.

As the “pharmacy of the world”, India has shouldered the responsibility of providing medicines and vaccines to lower-income countries for two decades. It has increased access to medicines enormously. The world’s approach to COVID vaccination simply relied on more of the same. India was expected to play a key role in supplying low- and middle-income countries via Covax, only for its devastating second wave to derail those plans.

High-income countries have also pledged to share close to 2 billion vaccine doses with lower-income countries, but so far, only 14% of these donations have been sent. The resumption of vaccine exports from India cannot be a another excuse for these countries – who have very high vaccination rates, with some already running booster campaigns – to further delay supplying doses to low-income countries and thus prolong the pandemic.

Rory Horner has received funding from the Economic and Social Research Council (ESRC), Regional Studies Association (RSA), British Academy and the National Science Foundation to support his research on India’s pharmaceutical industry. He is also a Research Associate at the Department of Geography, Environmental Management and Energy Studies at the University of Johannesburg.

2021-10-22
Previous Post: Doomscrolling COVID news takes an emotional toll – here’s how to make your social media a happier place
Next Post: Why Squid Game is actually a critique of meritocracy