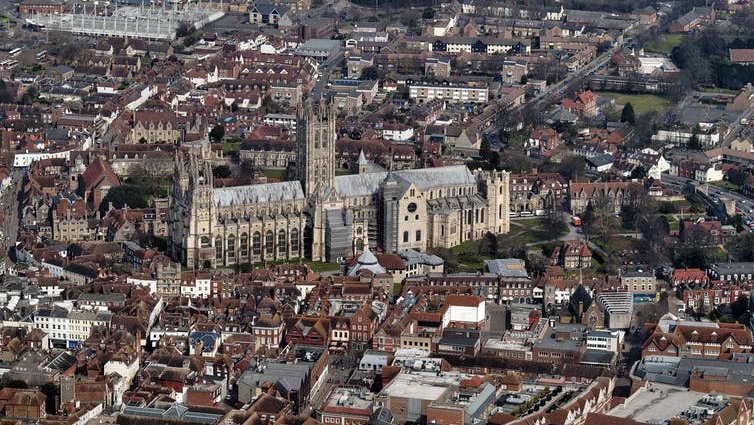 Southend-on-Sea is to be accorded the status of city in honour of David Amess. On October 18, 2021, three days after the Conservative MP was murdered in his constituency surgery in Leigh-on-Sea, Boris Johnson announced the Queen had agreed to the grant.

Seeing Southend acquire this new label had long been Amess’s goal. As he put it in the House of Commons in 2019, “I know that the House has become tired of hearing me ask for city status for Southend … but I am not going to shut up until it happens.”

The UK counts 69 cities. Pre-reformation cathedral towns including Canterbury, York and Durham, were cities by ancient prescriptive right. In other words they have been regarded as cities from time immemorial.

As I have shown in my book, City Status in the British Isles: 1830–2002, the manner in which this honour has been granted to a town has changed considerably through the centuries. Though some towns, including Milton Keynes and Dunfermline in Scotland, have temporarily declared themselves cities, being granted the honour by royal charter remains a primary motivation.

The entitlement of the reigning monarch to create cities goes back to the 16th century, when Henry VIII dissolved the monasteries and founded six Anglican dioceses with the proceeds. As a result, half a dozen towns, including Oxford, became cities by virtue of their being diocesan centres.

When new dioceses were created in the 19th century, their diocesan centres were located in towns which had an appropriate parish church which could be consecrated as a cathedral such as Manchester. And most people’s understanding of how a place becomes a city still relates to it having a cathedral.

That, however, is a modern urban myth. The link was broken in 1889, when a charter was conferred on Birmingham as a result of its size and importance.

From that time onwards the status was given, often in conjunction with a royal visit such as Stoke on Trent in 1925. More recently, in 1994 St David’s in Wales and Armagh in Northern Ireland were promoted via the monarch’s prorogative.

By the 1960s, so many towns considered themselves suitable for city status that the Home Office decided to make the process a competition. Rival towns would vie for the honour through a contest organised in conjunction with specific festivities such as the Queen’s jubilees and the millennium.

Sunderland was thus awarded city status on its fifth attempt, in 1992, on the occasion of the Queen’s ruby jubilee. And to mark the golden jubilee in 2002, five towns – Preston, Newport, Stirling and Lisburn and Newry in Northern Ireland – followed suit.

In June 2021, the government announced a competition would be organised in conjunction with the platinum jubilee in February 2022. The closing date for applications is December 8 2021. Southend, guided by Amess, intended to throw its hat into the ring.

What becoming a city does

Being a city does not bring tax breaks or financial benefits, but it is generally held to benefit the citizens of those places which are successful in the competitions. The only guidelines for local government officers preparing the applications is that they need to emphasise civic pride, heritage, innovation and opportunity.

Urban planners speak about civic boosterism. Previous winners have emphasised the benefits the status has wrought. Stephen Parkinson, who led Preston’s successful bid in 2002, argued that it served to put his town on the map.

“We have joined an elite club,” Parkinson said. “You are recognised internationally and nationally as a place that means business.”

Where does Southend fit into this? It is one of three Essex towns, along with Chelmsford and Colchester, to have entered all the competitions since 1992.

Chelmsford was successful in 2012. But even though Southend now drops out of the current competition, Colchester does not automatically qualify. It still must be judged, along with with aspirant cities from around the country, on the quality of its application.

There is nothing to stop a town declaring itself to be a city, but most applicants want the legitimacy conferred by a royal charter. No city, to my knowledge, has ever turned it down.

John Beckett does not work for, consult, own shares in or receive funding from any company or organization that would benefit from this article, and has disclosed no relevant affiliations beyond their academic appointment.