Eva Langret interview: the woman carrying the art world’s hopes on her shoulders 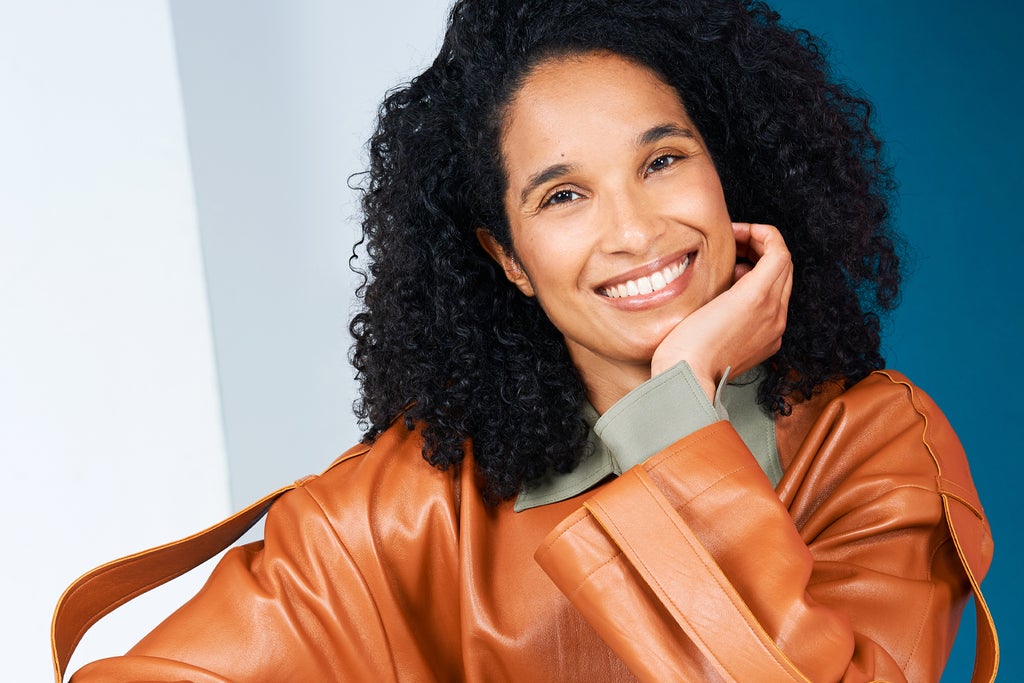 nyone who has had builders in over the last few months, with the associated availability nightmares, the doubled prices and the scarcity of materials, will feel sympathy with Eva Langret. Tomorrow, the artistic director of Frieze London opens the organisation’s first permanent gallery space at No. 9 Cork Street and until a couple of days ago, construction was still ongoing. Langret is unfailingly discreet, ensuring nothing registers on my tape recorder, but her bowed shaking head, when I ask her if it’s been a bit of a nightmare, tells a story.

That’s before you factor in that she’s also in the middle of building a tent in Regent’s Park to house the now world-famous fair and the gazillions of pounds-worth of art to be displayed in it, opening next week. Or the fact that, despite having bagged the job in 2019, this is, for obvious reasons, her first IRL Frieze London with her hand on the tiller.  “There’s quite a lot going on,” the Paris native says, with eloquent understatement.

Chatting in the Evening Standard offices this week though, she’s mostly in positive mode (except when I mention her video on the Frieze website, introducing the fair, and she cringes. Her last position was as head of exhibitions at the respected gallery Tiwani Contemporary on Little Portland Street , and she’s clearly still getting used to the increased visibility her new job requires).

Though the fair was banished to the realms of the virtual last year, it went surprisingly well, with an astonishing £11m worth of art sold on the first day, with no vindication of the once-commonly held fear that big-ticket items (a £2.6m Mark Bradford painting, for example) don’t sell online. This year, with the return to the tent, the most surprising thing is the extent to which it’s business as usual, with more than 160 galleries from 40 countries in situ. “We have galleries from countries that are on the red list and they have found a way to be here,” Langret says. Most will have a virtual presence as well.

Langret isn’t worried about numbers, she says. Frieze mostly expects its usual crowd of Brits, Europeans and a healthy sprinkling of American collectors, newly allowed into the country, as well as Middle Eastern collectors, who often maintain a London base. “There’s tons of positive energy around the fair,” Langret says. “Everyone’s super excited that it’s back; galleries are really excited, collectors are excited. It feels like a long time coming, but also, that it was worth the wait. This is a big moment for them.”

By them she especially means London’s community of galleries. For all the jaded chat pre-pandemic about the relentless art world merry-go-round, for all the talk of taking a rain check and rethinking since the hell of last year, the return of Frieze does feel like a huge moment of relief, so central has it become to London’s art scene. Langret is acutely aware of this – more so than ever, she says.

“Last year was a big moment for us to really understand and continue to support our community in London, because last year, this is all we had,” she says. “In moments like this, you really understand the importance of that immediate local community.”

Langret grew up in the suburbs of Paris, visiting museums with her mother and painting with her grandmother, a “Sunday painter. She was a great admirer of Corot and she used to do a lot of sad landscapes.” She thinks it inspired her interest in art, but “I think for the longest time, though I didn’t really know about being a curator, I didn’t really know about the sort of jobs that are available in the art world. That came much later for me, simply because neither I or my family were insiders to that world.” When she was in high school, she went to a careers adviser. “I said to the guy, you know, I really want to work in the arts, but he gave me a leaflet to do, like, golf studies. There’s not even a golf course there. That was the most creative thing that they had. That wayfinding was not straightforward.”

Having done a solid degree in politics and economics in Paris, she came to the UK and “started all over again”, studying art history at SOAS, though not without trepidation. “I think, to do with background and stuff, there was maybe a lot of nervousness [from my parents and from me] around launching into an arts career without a security net, without knowing if one is going to make it and I think the odds were very much against me.”

She came to London, she says, because she “had the sense that there was an art history beyond what I would have been taught in Paris. I wanted an expanded version of art history. I didn’t necessarily want what was being taught in Paris at the time, which is very French, very Eurocentric, very conservative. I think it’s changed now. I mean, that’s literally 20 years ago. But at the time, you know, there wasn’t much chatter around what I was interested in.”

She clearly needn’t have worried. Langret talks about the fair in a way that actually convinces you it could be more than just a big shop for rich people. “It’s really important to think about Frieze as a platform,” she says, “what it does and what it can do, that’s good. I’ve been thinking a lot about the roots of the magazine, and the importance of supporting voices of one’s generation.”

The curators she’s chosen are all British or European to champion what she thinks of as local talent. It’s not clear whether this is a veiled poke in the eye to Brexit – when I ask her about the effect of leaving Europe on the fair, she makes a face and dismisses it as “admin. A bit more admin, a bit more communication with the shipping agents. Nothing galleries aren’t used to”. But she does concede that “the UK arts world is so international, the spirit of Brexit is at odds with the values of most people working in the arts – we like to challenge boundaries and to tear walls down not build them up.”

We’re speaking just a couple of weeks after the appointment of Nadine Dorries as Secretary of State for Digital, Culture, Media and Sport. Langret hasn’t met her yet, she tells me, but “the main thing we want from a culture secretary is someone who is engaged with culture, someone who looks at art, listens to the arts sector and really understands the huge value that the arts contribute to the UK as a whole. The arts were neglected in the pandemic and so this role is more urgent now than ever,” Langret says. It remains to be seen whether Dorries will make an appearance at the London art world’s biggest event of the year.

She also thinks the government needs to support embattled UK institutions, caught between the rock of funding cuts and the hard place of increased scrutiny over where and from whom they find the much-needed money. “[They] need funds now more than ever and cuts to budgets have forced galleries to find money from other sources, but of course institutions need to be sensible in these decisions and build up systems of due diligence. However, this is not an easy task and if the UK government wants museums to find more sources of funding from the private sector they also need to provide the support that can allow them to make the best possible decisions in these areas.”

Her hope is that Frieze can reflect “what the future of the artworld looks like”. Which is what? “Well, it’s definitely more diverse. I think it’s perhaps more conscious – in terms of environment, in terms of diversity – and I think it’s maybe more community oriented.” I ask her how environmentally friendly it is shipping a load of art across the planet to sit in a tent for a week, and she gently lists all the things they do to mitigate it, like the switch to biofuel, issuing guidelines for all suppliers in terms of waste, vegetable to meat ratios for the restaurants and so forth.

When it comes to diversity, the art world as a whole has a way to go – the majority of sales (and certainly the most expensive) are still works by white men. Things are changing though, she says “slowly but changing – this year at the fair we are really trying to showcase young talent and encourage people to look beyond the big familiar names that have dominated for too long. I would point people towards [the curated section] Unworlding and [the performance strand] Live, but also throughout the fairs, be curious and don’t be frightened to ask questions about works and artists you might not already know.” Across the park at Frieze Masters, she notes the Spotlight section – “that really looks to expand 20th-century art history with voices that were maybe overlooked but are vital in our understanding of the art of the last century. “

Diversity also means cultivating new collectors, something that last year’s digital edition did much for. For one thing it attracted a lot of East Asian collectors – “Asian collecting has exploded in recent years, with interest across the board in all geographies and media,” – but also a lot of people who might not have considered collecting before.

“I think a lot of transparency has come out of it,” she says. “Before that, it was still not that usual for galleries to publish their prices, and that has been a really interesting step in terms of bringing new collectors to the table. There are lots of people out there who have the means to collect but who don’t necessarily know those codes – like you have to know someone who knows someone, you need to be introduced, etc. When you put [work] in a viewing room and you publish your prices, it encourages those new people to come forward and say, Hey, I’m interested in this, let’s start the conversation.”

She’s got to go – the first galleries to exhibit at No. 9 Cork Street are champing at the bit to install their shows. As she disappears down the escalators, it strikes me that this elegant woman is bearing the expectations of the London art world on her shoulders. She carries it remarkably lightly.

2021-10-08
Previous Post: Apprenticeship Subcontracting Manager at University of the West of England, Bristol
Next Post: Why Boris Johnson’s plans for a ‘high-wage economy’ require a major shift in the way British business works