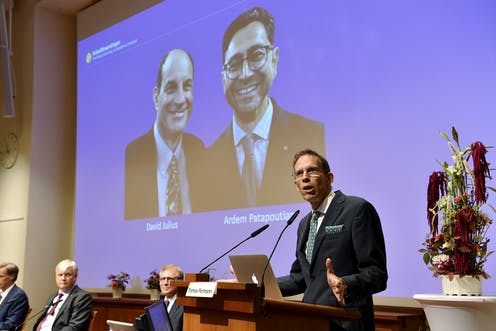 Think about how often we sense touch or temperature. Perhaps its the warmth we feel when we hold a coffee cup, or the comfort we feel when hugging a loved one – these sensations are integral to our everyday lives and how we interact with our world. These sensations are all part of our somatosensory system, which is responsible for many different sensations – including temperature, touch, body position and movement, pain and itch. Some might say that the combined effects of our somatosensory system are the very essence of what it is to connect to the world around us, and to experience it.

But until the late 1990s, little was known about how the body actually senses temperature and pressure. This is why the 2021 Nobel prize in physiology or medicine was jointly awarded to David Julius and Ardem Patapoutian, whose independent research uncovered the receptors which allow us to sense touch and temperature.

The discoveries made by Julius and Patapoutian help solve questions many people have been asking for years – showing us how these stimuli are converted into nerve signals at a molecular level. These discoveries may also have important implications for developing treatments for a variety of different conditions, including chronic pain, in the future.

A bit of spice

Both researchers began working on this topic in the 1990s, but were looking at it in different ways. Julius and his colleagues at the University of California were looking at a rather unconventional compound known as capsaicin, which is the chemical which causes the burning sensation we feel when we touch or eat chilli peppers. While researchers already knew capsaicin activated nerve cells that caused sensations of pain, Julius sought to uncover which sensors in the nerve endings actually respond to the heat from this compound.

Using lab-grown neurons – humans nerve cells – Julius and his team created a library of millions of DNA strands that corresponded to genes in the sensory neurons that react to pain, heat and touch. This eventually led them to identify a single gene that was responsible for making cells sensitive to capsaicin. The gene allows cells to build a protein called TRPV1 which led to these receptors perceiving the heat from capsaicin as painful.

This was the first of many more temperature-sensing receptors Julius and his lab discovered. Using menthol, Julius identified TRPM8, a receptor shown to be activated by cold. He also used the chemical found in wasabi to identify TRPA1, which is triggered by pain. Julius’s TRPV1 discovery was a breakthrough which allowed further research into how temperature induces electrical signals in the nervous system.

Patapoutian, from the Scripps Research institute in California, uncovered the mechanisms which underpin our sense of touch. Patapoutian’s research first began when he and his team identified a type of cell that gave off an electrical signal when it was poked with a micropipette. But to understand more about these pressure-sensitive cells, Patapoutian and his team first needed to identify which receptor was responsible.

They started with 72 candidate genes, inactivating them one by one until they found that the single gene responsible for creating the protein which responds pressure on cell membranes – known as Piezo1. This discovery then led them to find a second gene, called Piezo2, which functions similarly.

This decades-long search now means researchers understand the mechanisms underpinning our sense of touch. Piezo1 and Piezo2 both work to initiate an electrical signal that travels between cells and to the brain when our skin or internal organs are touched or feel pressure.

The importance of these senses

Mammals are the only organisms that have the ability to generate and maintain our internal body temperature. If our blood temperature falls below 27℃ we’re in critical condition. It’s essential for survival to be able to sense temperature changes in our environment in order to maintain our core body temperature. It tells us that we should put a coat on if it’s cold outside, or not to touch a hot stove door so we don’t get hurt.

Julius’s discovery of the temperature sensitive receptors in our nerves means we now know how changes in our environment’s temperature is detected. Discovering both the receptors that detect heat – TRPV1 – and cold – TRPM8 – now means we may have targets for drugs to treat inflammation, itch, pain and cold allodynia (increased sensitivity to cold temperatures).

Our sense of touch is also extremely important to us for a number of reasons – not least of which because it allows us to enjoy a hug. Being able to detect a mechanical stimulus – the sense we call touch – is important to every tissue and cell in our body. It means that the body can monitor blood flow, a full stomach, or when our bladder is full.

Patapoutian’s research means that we now understand which receptors allow us to sense touch, which could have many implications for future treatments. Researchers are already targeting the proteins Patapoutian discovered for the treatment of pain conditions.

Francis McGlone does not work for, consult, own shares in or receive funding from any company or organization that would benefit from this article, and has disclosed no relevant affiliations beyond their academic appointment.