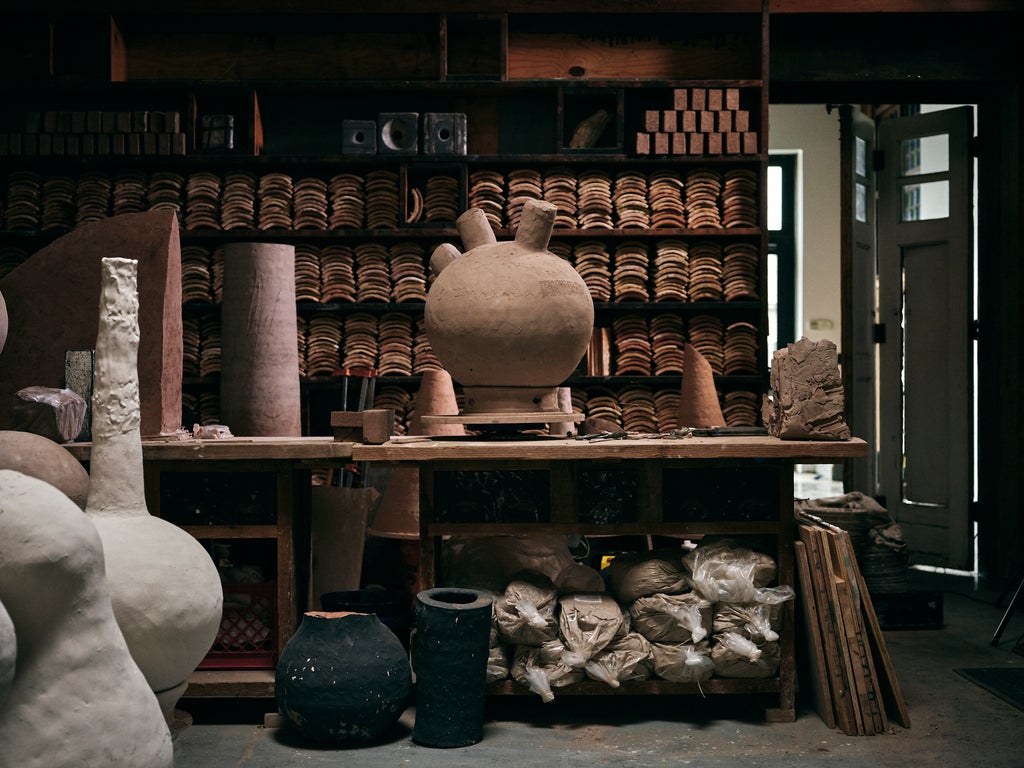 he centrepiece of this show is a beautifully shot video, made this year. It ends with archive footage of a young Theaster Gates telling an interviewer that he is “dying to do a short film about clay”. It took the 48 year old a while to do it, but it was worth the wait.

We see Gates in a derelict brick factory in snowbound Montana, singing at the potter’s wheel and heaving a ceramic work from a kiln. He and his band the Black Monks’ gospel music accompanies these striking sequences and more archival imagery; some found, some personal. It’s a moving portrait of the artist and a medium that’s entwined in his life with sacred song, religion and community.

Gates studied ceramics with traditional artisans more than 20 years ago in Tokoname, Japan. But he was also urged to develop his own style. Gradually he homed in on the concept of Afro-Mingei, fusing Japanese philosophy and folk traditions with African American culture. But before we see the fruits of this concept, we’re given a mini history of ceramics, with loans from the Victoria and Albert Museum. Four display cases take us from ancient China and Iran to the modernism of Lucie Rie. But as well as illustrating outstanding historic works, Gates shows us the medium’s more poisonous past, with hideous ceramic caricatures of Black people borrowed from Ed J Williams’s collection of racist ephemera.

With these hideous tchotchkes is a storage jar created by David Drake, or Dave the Potter, an enslaved man who worked in potteries in South Carolina and was able to make vast, bold vessels often inscribed with lines of poetry, when it was illegal for enslaved people to write. The jar here is dated 1862, when America was at war over slavery. It’s a breathtaking moment.

Beyond these cabinets Gates’s ceramic works are shown amid other contextual vitrines and objects. There’s a homage to the American ceramic sculptor Peter Voulkos next to Voulkos’s own raw, dynamic work. A brick press and moulds are shown with beautiful white glazed bricks and one of Gates’s works honoring George Black – “alchemist of earth and maker of brick”, as Gates once described him. Black’s bricks are stacked on a metal stand and thus imbued with the sublime power of minimalist sculpture.

After the contextual material downstairs, upstairs is pure Theaster: magnificent pieces riffing on that history below, as well as modernist sculpture. Gates’s ceramic pieces are displayed on and framed by wood and stone, instantly evoking Brancusi.

In them, he brilliantly fuses personal references, like the use of tar – which his father used in his work as a roofer – with African American cultural emblems, like the party-stained rug from the penthouse of the Johnson Publishing Company, which published the Black magazines Ebony and Jet. On the rug’s bold orange, tan and brown geometric pattern sit a chair inspired by historic African objects and a clearly Asian-influenced glazed stoneware vessel – pure Afro-Mingei.

It’s a magnificent display: upstairs at the Whitechapel has never looked so good. This beautifully judged and perfectly paced show is a must-see.