Global Britain is becoming a stooge of the US 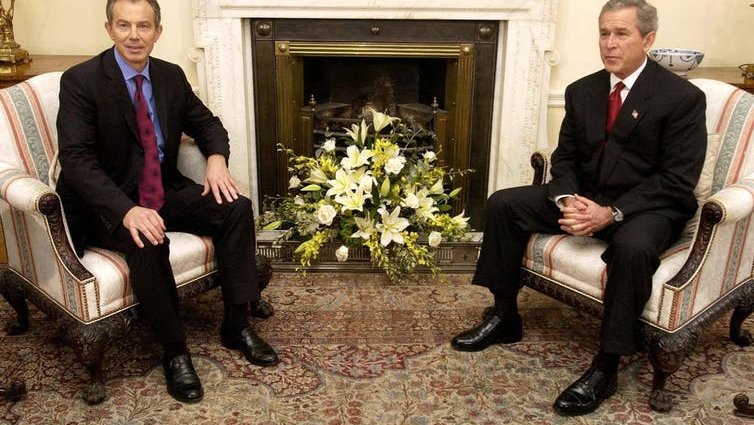 The scenes as American and British troops withdrew from Afghanistan were heartbreaking. People desperate to leave the country they love, offering up their children for transportation to a more peaceful country, being crushed to death for a chance at freedom.

Those horrific scenes were also visual confirmation of Britain’s waning influence in the world, despite hoping to become “Global Britain” in the wake of Brexit. Tom Tugendhat, a Conservative member of parliament and chair of the foreign affairs select committee, described the departure from Afghanistan as “the biggest foreign policy disaster since Suez”.

The 1956 Suez crisis – which ended with the US pressuring the British and French to end their invasion of Egypt – was a turning point in British foreign policy. It held up a mirror to the British political establishment, showing the public very clearly how Britain’s overseas influence had declined.

The Leave campaign pitched post-EU Britain as an outward-looking world leader, fighting for the ideals the UK holds dear. But when push came to shove in Afghanistan, here were the British, again following the US’s lead.

In his first official private meeting with US president Joe Biden since Biden took office, Boris Johnson was keen to leverage the “special relationship” to build Britain’s international status and cement its position as the ally of choice for the US. But a closer look at the status of this relationship suggests the UK has, instead of taking a step towards becoming “Global Britain”, traded its leading role in the EU for a subordinate one in the shadow of the US.

The “special relationship’” is built on military cooperation and the sharing of intelligence and the complementary elements of the US and UK intelligence services allow valuable information to travel in both directions. Any problems or issues within the relationship, such as the repercussions of the tragic death of Harry Dunn after being hit by a vehicle driven by the wife of a US intelligence officer, are quickly compartmentalised and largely forgotten about to maintain the working practices of the two partners.

By 2016, with the arrival of Donald Trump in the White House, many observers of British foreign policy recognised that the heady days of the Thatcher-Reagan or Blair-Bush partnerships were gone. In the short term, Britain’s priorities were the Brexit negotiations and to build a relationship with Trump, beginning with a state visit to the UK. While the relationship between Theresa May and Trump may not have been perfect (nor the relationship between Johnson and Trump) it did at least keep the train on the tracks as far as the relationship was concerned.

The election of Biden, the Obama-era vice president and a Democrat, promised someone perhaps more level-headed than Trump. Still, there were concerns over Biden’s – an Irish-American Catholic’s – views on Northern Ireland and the Brexit negotiations, compounded by some objectionable comments Johnson made about Obama when Biden was vice president.

So far, we have seen very little of that “specialness” between Biden and Johnson, but tensions and complaints over Afghanistan were eased with two recent initiatives.

The first was AUKUS, the deal between the US, UK and Australia to provide nuclear submarines for use in the Pacific region.

Beyond its immediate financial benefits for the UK, this deal builds a stronger relationship with Australia, where Britain is very keen to sign a trade deal, and it demonstrates some closeness between the UK and the US. Being able to “get one over” on the French is, for some, just an added benefit.

The second was the easing of travel restrictions between the US and the UK (and large parts of the EU). This was something the UK and EU had been working on and the success was counted, in both London and Brussels, as a sign of improving relations with Washington.

However, the UK government would be foolish to believe their own hype. The “special relationship” is far more special in London than it is in Washington and the election of Biden will not change that. While a post-Brexit Britain needs the US more than ever, the US needs the UK considerably less, and benefits come with costs.

After his meeting with Biden, Johnson claimed he hadn’t been asked about Northern Ireland and the issue of Brexit. The White House transcripts disagreed, demonstrating that the US are unafraid to demand action and the UK can do very little to frustrate them. While Johnson may be able to ignore Biden’s demands in private, he will be far less able if they ever become loudly public.

The US has always been able to shout “jump” and the UK ask “how high?” but the public humiliation which goes with that does not fit well with the post-Brexit rhetoric of a strong, “global” Britain. Voters may well hold the Johnson government responsible for any perceived decline they see in the UK’s global influence.

As happened in Suez, the UK has been reminded that it is an – but not the only – important country internationally. It isn’t in the big leagues, and therefore it will need to ensure it remains allied to a much bigger player if it wants to see its influence bear fruit.

That could have been the EU perhaps, or even the UN security council or Nato. But as Britain has done before, it has looked to the US – an example, perhaps, of what French foreign minister Clement Beaune described as Britain’s “accepted vassalisation”.

Britain in the 1950s was wedded to the US, acting as a partner rather than leading the charge. Now, while the UK continues to support the US, the influence it has seems negligible. While it may bring comfort to the UK to feel it is a partner to a superpower, being its stooge or subordinate is an unpleasant place to be, no matter how much you tell yourself it values your opinion.

Victoria Honeyman does not work for, consult, own shares in or receive funding from any company or organisation that would benefit from this article, and has disclosed no relevant affiliations beyond their academic appointment.