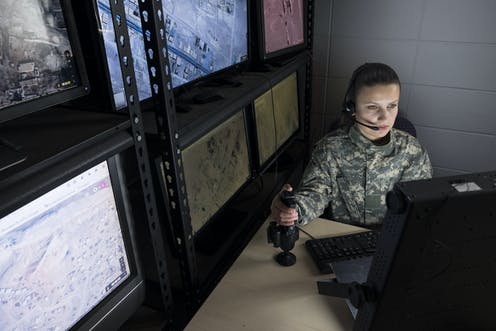 Drones have become the signature tool of 21st-century warfare, particularly by US forces in the “war on terror”. The fundamental rationale for drone use relies on their “surgical precision”, supposedly saving civilian lives.

But headlines show us this isn’t true. A recent US drone strike in Kabul, Afghanistan mistakenly killed 43-year-old aid worker Zemari Ahmadi, along with nine members of his family, including seven children. This idea of precision is just one of many pervasive myths about drones that I’ve set out to dispel in my research.

Military technology aims to inflict maximum damage to the enemy while minimising our own losses of manpower and material. Drones have advantages compared to piloted aircraft, primarily that they protect the lives of those conducting strikes. This has lulled us into a false sense of security about the nature of war, suggesting that conflicts can be won from a distance, with minimum harm to civilians, in wars that are ethical and respect international law.

Addressing these myths can hopefully reduce harm to the unarmed population and bring the civilian body count from drone strikes down to zero.

Drone pilots – humans operating the weapons remotely – wait for a target to appear then launch a missile. The process of identifying a target and carrying out an attack is minimised, with pilots potentially making grave decisions “on the fly”.

In Iraq, more than 13,000 civilians have been killed in coalition drone strikes since they resumed in 2014, when Islamic State (IS) captured areas of Iraq (they had ceased three years earlier with the withdrawal of US and UK troops).

In drone strikes, the aim is to kill not capture. Human beings are denied the right to surrender and are instead executed for being members of a group defined by the killers as evil. Drones are thought to appear in a sticky situation to swiftly reward the just and punish the unjust. Those executed are presumed “guilty”, without arrest, questioning or subsequent conviction. Targeted killing becomes normalised, leading to increasing human rights abuses.

New York Times journalist David Rohde, who was kidnapped by the Taliban for months in 2008 and 2009, described the buzz of drones overhead during his captivity as “hell on earth”.

Myth 3: if the war is legal, so is the weapon

According to international law and the Geneva conventions, all parties to a conflict must distinguish between combatants and civilians – the latter being “protected persons”.

US President Barack Obama signed an executive order in 2016 to minimise civilian casualties in all uses of force. That year he published presidential policy guidance on “direct action against terrorists”, which laid out a process for authorising drone targets in line with the principles of just war theory, a tradition of military ethics that determines which actions are acceptable when waging war.

The use of drones was supposed to both respect the law and protect the vulnerable. Yet in Iraq the methods that killed the most civilians per event were drone strikes.

To protect civilians from indiscriminate harm, as required by international humanitarian law, military and civilian policies should prohibit aerial bombing in civilian areas, unless it can be demonstrated —- by monitoring civilian casualties —- that civilians are being protected.

Myth 4: drones are a triumph of technology

If only drones were used, goes the logic, wars would still be fought in far-off places, but without tens of thousands of boots on the ground. Yet despite their increasing use, drones have not fully enabled militaries to avoid the usual (dirty and costly) methods of fighting wars.

Iraq and Afghanistan started as high-tech wars, but rapidly evolved into widespread insurgencies. In response, the US and its allies committed hundreds of thousands of boots on the ground, resulting in casualties in the occupied countries and in the west.

In the last 15 years we have turned to the new technologies of eyes in the sky – armed drones and long-range strikes, but also special forces and privatised military corporations. With this has come the policy of training and arming local forces, while drones and special forces handle the counterinsurgency.

While no large-scale attack has taken place on US soil since 9/11, hundreds of thousands of Iraqi civilians have been killed since the 2003 invasion as a result of drone strikes and other military action.

Aerial bombardment has not created peaceful states, nor defeated IS, nor stopped the violent deaths of innocents, nor abated sectarian conflicts, nor alleviated suffering. These wars have led to endemic anarchy, mass exodus of civilians, death, poverty and generations living with the trauma of war. They have contributed to the rise of theocracy and jihadism. Wars rage, as millions are radicalised, disillusioned and despairing.

The physically remote and concealed nature of drone tactics prevents state transparency regarding those killed and injured, denying individuals the dignity of recognition and obscuring the full human costs of warfare.

2021-09-15
Previous Post: Three things that could help save Christmas 2021 from shortages
Next Post: Grammar still matters – but teachers are struggling to teach it