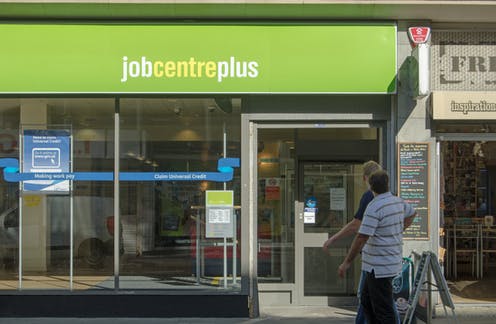 Unemployment levels will be an important test of the economic impact of COVID-19. Some sectors have seen employees furloughed en masse, and the longer-term effect on businesses could mean that many lose their jobs permanently.

Aside from causing financial difficulties, unemployment can take its toll emotionally and psychologically. Research my colleague and I conducted suggests that the negative effect on mental wellbeing varies depending on where you live.

You might expect this to mean that unemployed people feel worse off when they live in places with high unemployment rates, simply because it appears less likely that they will find a job. But what we found was the opposite.

Instead, the negative psychological effect of unemployment on a person was eased as the overall neighbourhood unemployment rate rose. Put simply, unemployment hurts less when you are surrounded by unemployed neighbours.

We discovered this by matching a large household survey that covers people’s self-reported mental wellbeing and employment status, with local labour-market data.

Using this information, we were able to examine the negative effect of unemployment on mental wellbeing, and whether it had more of a negative effect in some neighbourhoods than others.

As an example, we found that the average gap between the self-reported mental wellbeing of unemployed and employed people was three times as large in neighbourhoods with the lowest rates of unemployment.

One explanation for this is to do with strong social expectations surrounding work. People often internalise feelings of guilt and shame when not working as they perceive unemployment as violating traditional social norms.

So while greater levels of unemployment make it harder to find a new job, it may also diminish the psychological cost of unemployment, as the social pressure to work may not be as strong when surrounded by unemployed neighbours.

We also found that the mental “benefits” of being surrounded by unemployed neighbours were greater for men than for women. And it seems to matter more for relatively older unemployed people of working age.

Perhaps the most likely explanation for the differences between men and women is simply that social expectations surrounding employment remain stronger for men due to traditional gender roles that tend to still see men as “breadwinners”. As a result, men may have more to gain from anything which lessens the stigma associated with unemployment.

When it comes to age, relatively older cohorts are more likely to interact with their neighbours, so local comparisons may take on comparatively greater importance.

For younger unemployed people, their social world increasingly extends beyond the neighbourhood into online and virtual forms of networking. What this means in practice is that they are just as likely (if not more likely) to compare themselves to people living outside of their neighbourhood.

The differences between neighbourhoods we have uncovered could be useful in the political sphere when it comes to tackling unemployment. For just as those in employment will be less committed to jobs they perceive as being low quality, it is also possible that the unemployed will be less committed to finding jobs (at least poor-quality ones) when living in neighbourhoods with high unemployment rates.

This may be particularly relevant in the UK, a country that scores well on job quantity, but has come under increasing scrutiny when it comes to the quality of that work.

Overall, our research has shown the importance of non-financial factors in explaining the negative psychological effect of unemployment.

Even though living in a neighbourhood with comparatively high unemployment rates can diminish the psychological effect of being unemployed, it is important to recognise that unemployment is always harmful for mental wellbeing – and significantly so. It is just the degree to which it is harmful that will vary from place to place.

Peter Howley does not work for, consult, own shares in or receive funding from any company or organisation that would benefit from this article, and has disclosed no relevant affiliations beyond their academic appointment.