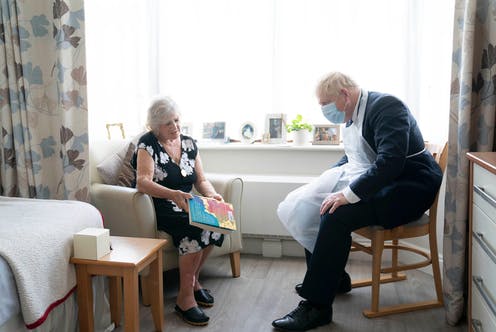 Boris Johnson has unveiled plans for a £12 billion-a-year tax rise from April 2022, to fund social care reform in England and to tackle the NHS’s COVID-induced backlog of cases.

Demand for care – from short-term needs to long-term support – is rising and levels of unmet need are soaring. Social care needs urgent investment.

The four nations of the UK each have their own care systems. In England, requests for social care have gone up 6% in the last five years but there has been a decrease in people getting support. Around 14,000 fewer people have received the help they need.

The announcement of extra funding intended to fill that gap should be heartening. However, the money the government is seeking is set to finance not only a social-care system reform but also an NHS rescue plan. Getting back to pre-pandemic level of NHS service alone is likely to cost almost £17 billion. Critics fear that the new levy will be used up within the NHS with little left to spend on improving social care. The research I have done on care markets and sustainable care systems highlight that these new proposals are unlikely to deliver what we so urgently need.

Social care, which provides long-term care for people with a disability and age-related frailty, is a hugely complex system. It covers residential care, home care, day services and a wide range of community supports.

In the UK, most of these are provided by the private sector, in a diverse marketplace of thousands of providers and community groups. People currently pay for their own care if their assets exceed a certain level (£23,500 in England), otherwise care is purchased for them by their local council.

People are living much longer with multiple conditions that need support from the care system. Although much of the conversation about care focuses on older people, half of spending is actually on working-age people with disabilities. Families also provide a huge amount of informal care and support.

Boris Johnson has been promising reform to social care since he took office in 2019 and, finally, he has announced what that will be. The plans involve a national insurance rise for what the government is labelling a health and social care levy. They also include a limit of £86,000 to how much people will have to pay for care in their lifetime.

At the moment there is no maximum amount that a person can pay for care. For some people with long-term conditions like dementia, the costs run into hundreds of thousands of pounds.

There is a real need for new money in the system. But of the £36 billion that will be raised by this levy, only £5.4 billion will go to social care, and half of that will pay for the new care cap rather than address any of the existing strains in the system.

Proposals to introduce a cap on care spending are welcome. But we’ve had a cap in law before. It was part of the Care Act 2014 and then abandoned because of concerns about the viability of implementation.

The spending of self-funders (a relatively invisible and hard to research group) would need to be monitored by local authorities so that it was clear when the cap had been reached. We don’t yet have systems in place to do that. The current proposals (a cap on spending with a sliding scale of contributions for people with assets of £20,000 to £100,000), appear to be even more complex that those attempted in 2014.

The new proposals also do nothing to address low pay for the 1.5 million people working in the care sector. They won’t improve the range, quality or adequacy of social care, a system that many people say is about meeting basic needs rather than enhancing wellbeing or allowing people to flourish.

For those articulating a more ambitious account of what social care reform could achieve, there is little to celebrate in the new announcements.

If the proposals make it into law – and there is a long road ahead with potential hostility from all sides – then they will apply to people accessing care from 2023. Having paid towards a health and social care levy, many of these people will have high expectations of what they will get from social care. If the money goes to the NHS, leaving social care mired in crisis, then there may be political costs to Johnson beyond his current headache of a broken manifesto promise.

Catherine Needham has received funding from the Economic and Social Research Council and the National Institute for Health Research. She is a member of the Labour Party

2021-09-07
Previous Post: Everything that’s wrong with sentencing a white supremacist to read Jane Austen and Charles Dickens
Next Post: Why has the UK’s wet summer been bad for bees?