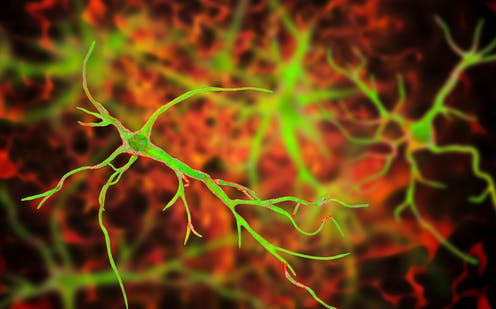 The Conversation Weekly podcast is taking a short break in August. For the next few weeks we’re bringing you extended versions of some our favourite interviews from the past few months.

This week, how researchers discovered a biological switch that could turn neuroplasticity on and off in the brain. What might that mean?

Neuroplasticity is the ability of neurons in the brain to change their structure. It’s what allows the brains of young animals to change more easily than brains of old animals – and it’s one of the reasons why it’s easier for children to learn languages than adults.

There’s still a lot researchers don’t know about this critical function of the brain. But we do know that many diseases are caused by too little or too much neuroplasticity, and so being able to dial it up or down could have some really important medical benefits.

Sarah Ackerman, a postdoctoral fellow at the Institute of Neuroscience and Howard Hughes Medical Institute at the University of Oregon, studies fruit flies and the mechanisms that turn neuroplasticity on and off in their brains. She talked to us about her team’s new research findings into how these changes are controlled by a type of brain cell called astrocytes. The goal is to help fight diseases, but this work could also potentially unlock the superpowered learning that comes with a malleable brain.

This episode of The Conversation Weekly features an extended version of an interview first published on April 29. The episode was produced by Mend Mariwany and Gemma Ware, with sound design by Eloise Stevens. Our theme music is by Neeta Sarl. You can find us on Twitter @TC_Audio, on Instagram at theconversationdotcom. or via email on [email protected] You can also sign up to The Conversation’s free daily email here.