Happy and ‘Victorious’ on Gosforth Park! 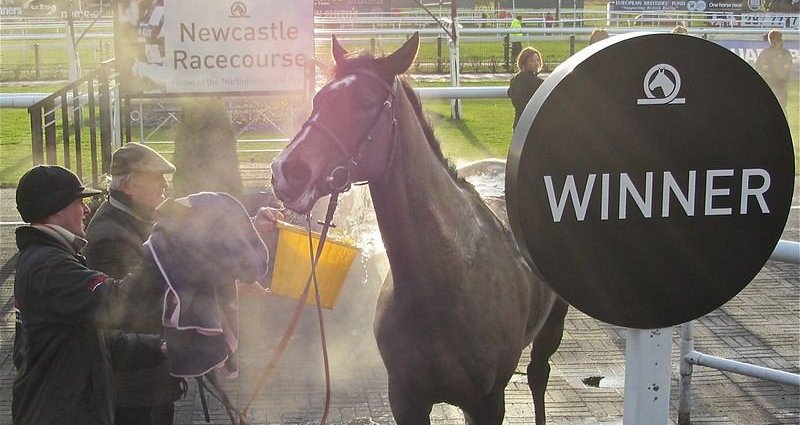 Blind Beggar, costly and vexing for owners (and punters!) has an excellent opportunity to finally get off the mark in a weak-looking nine-runner Novice Stakes over five furlongs of Newcastle tapeta tonight; can you wait, all day?
This consistent, hitherto luckless Equiano gelding, placed three times in succession as a two-year-old, twice when trained Michael Dods, will be saddled by Malton-based Richard Fahey under the floodlights and ridden by stable jockey Paul Hanagan, whose career looked in jeopardy for a while last year due to a persistent back injury.
Thankfully one of the nicest blokes in racing has recovered; ‘The Managan’ is looking forward to riding for his long-time guv’nor, who steered Paul to a couple jockeys’ championships prior to his much-chronicled Newmarket venture where he rode for Hamdan Al Maktoum before returning North, to his roots.
Disgusting behind-the-scenes ‘politics’ led to Hanagan’s demise, and Jim Crowley took over the prime job.
An interesting rival to Blind Beggar is recent course and distance winner, penalized Havagomecca, trained by Dods!
That should add spice to a ‘dash,’ which I’ll bet will be won by 84-rated Blind Beggar, napped.
An hour later, two ‘HQ’ big guns, John Gosden and Roger Varian clash in a Novice Stakes over the magnificent straight mile with Cordouan and Malhood respectively; serious-backers will focus on them but might overlook recent promising Kempton debutant, Victorious Night, a rare Gosforth Park runner for Richard ‘winning machine’ Hannon.
The racing family Hannon never wastes a race, and you can bet Victorious Night, third (of 14!) under stable apprentice Thore Hammer Hansen, from a desperate draw, will be firmly ‘on the premises’ to stake her claim. There is again booked and claims a handy 3lbs allowance which should tilt the balance.
Talk about infiltration, I’m unable to recall Gary Moore having runners at Newton Abbot where penalized unchallenged Plumpton winner, Natural History, borders on a ‘cert’ for the nine-runner Novices’ Hurdle over an extended two miles of a pristine ‘good’ surface.
Newmarket Rowley Mile stages opening of the prestigious three-day(s) ‘Craven’ meeting, but from long experience, I’m always wary of getting involved on the first day of a major fixture; ‘to observe’ is my motto.

2021-04-13
Previous Post: Local investment helps Gunnislake Village Hall prepare to reopen its doors
Next Post: Why deaf prisoners have been in a state of lockdown since well before COVID-19