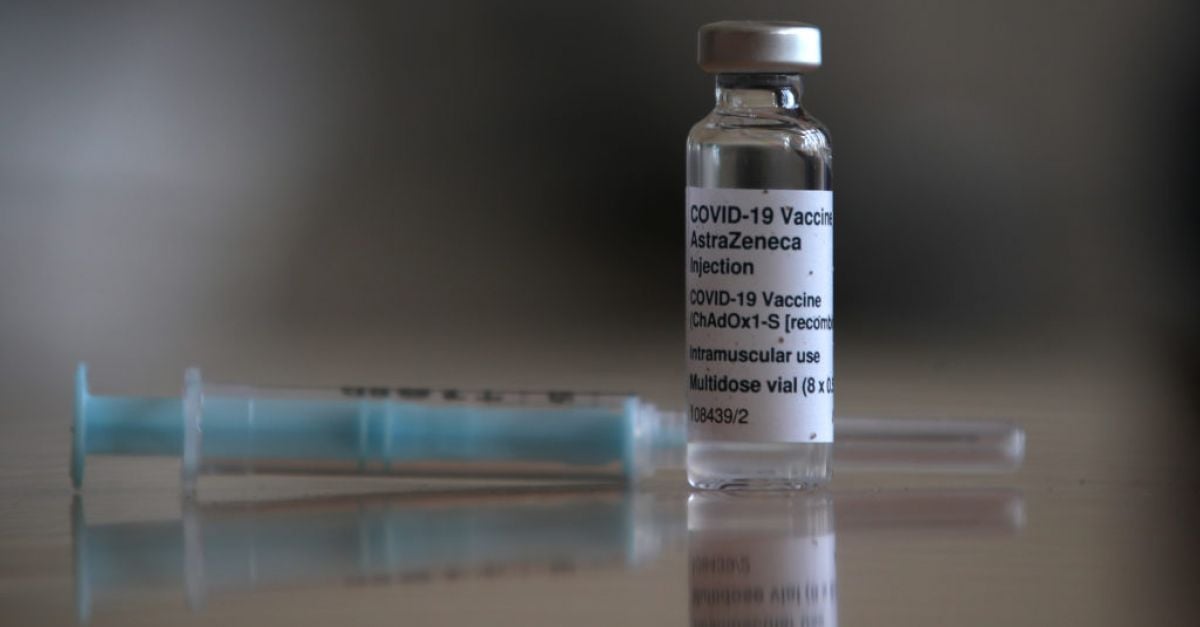 New restrictions on the use of AstraZeneca doses could slow the State’s vaccine rollout just when it was supposed to be accelerating, Government Ministers fear.

As The Irish Times reports, the impact will depend on the level of restrictions expected to be imposed by the National Immunisation Advisory Committee (Niac) on Monday, according to informed sources.

The advisory body is thought likely to recommend some form of restriction on the use of the AstraZeneca vaccine after the European Medicines Agency (EMA) last week warned that extremely rare blood clots were a side-effect of the drug that patients should be warned about.

Several EU countries have limited its use to only older people – as the clots have affected younger people – while the UK has confined it to those aged over 30.

The first option, if followed by Niac, would cause significant disruption to Ireland’s vaccine programme, as AstraZeneca is intended to be used to vaccinate many under-65s.

Officials are waiting anxiously for the advice as the country on Monday sees the most substantial reopening yet after the third and longest lockdown of the pandemic.

Speaking on Monday morning, Minister for Health Stephen Donnelly said that the Government will await a decision from Niac before any decision is made about further changes to the vaccination programme.

There was no point engaging in “what-if” speculation about the AstraZeneca vaccine, he told RTÉ radio’s Morning Ireland.

“When we get word from Niac, if we have to adjust (the programme), we will do so.”

Whenever NIAC had made a suggestion in the past, the Government had listened, he said. “It is a big challenge every time.”

The country’s vaccine strategy had always been “safety first” and if it was necessary for operational changes to be made, then that would happen, he added.

At present, 95 per cent of the vaccines that arrive into the country had been administered, but some quantities had been held back for the second doses, Mr Donnelly said.

Mr Donnelly said that if vaccines arrived as planned, by the end of June four out of five people who want the jab will have received an offer of it.

Monday is the first day since December that all children will be back at school, while the 5km limit also ends on Monday, with people allowed to travel within their own county, or within 20km of their own home.

Construction on homebuilding, early learning and childcare projects is also allowed to restart on Monday, while people will be allowed to meet with one other household, though not in their gardens.

Meanwhile, guidance for pregnant women on the risk posed by Covid-19 may have to be strengthened after more cases of virus-related stillbirths were identified.

Two more stillbirths linked to infection of the placenta by Covid-19 have been reported, bringing the total number of cases to six, the HSE said.

The new evidence of a risk to the foetus “puts a different slant on things”, according to Prof Peter McKenna, director of the HSE’s National Women and Infants Health Programme, who said it was “more important than ever” that women avoid contracting the virus when they are expecting.

2021-04-12
Previous Post: Research Associate
Next Post: A Response from STITCH, Torrington to the Devon Integrated Care Service, ‘Together for Devon’