COVID: A distorted sense of smell is dangerous but treatable 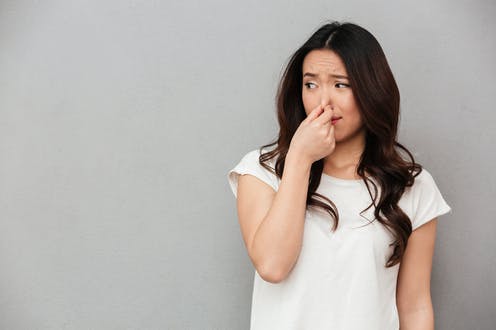 Lucy, a patient of mine, contracted COVID-19 in the first wave of the pandemic, before lockdown. She had trouble breathing and her doctor told her to call an ambulance if her lips turned blue. Luckily, she recovered well at home with rest and paracetamol – but it wasn’t the end. A week later, she suddenly lost her sense of smell and taste, which at the time wasn’t a recognised COVID symptom.

Slowly, over the following two months, her sense of smell partially returned. She danced around the kitchen with joy each time she could smell a new aroma. But then, at the end of May, she sat down to breakfast, had a mouthful of egg and nearly threw up. Lucy had developed parosmia, a condition where perceptions of odour are distorted.

Lucy’s triggers included coffee, wine, beer, chocolate, meat, eggs, onions, garlic and lemons. There was no logic to it. One day, something was fine, the next it was rank. A lot of food ended up in the bin; she was hungry and upset.

The smell of trigger foods was otherworldly: somewhere between the smell of death and sewage. It was so intense and offensive, and it lingered for hours. Even attempting to freshen her mouth was fraught as toothpaste was itself a trigger. Eight months on and she has a long list of safe foods that she tries to stick to, such as cheese. Flavour-free toothpaste helps, as does disguising the flavour of some distorted foods with cinnamon or black pepper.

For Lucy, eating remains an anxious experience and she describes mealtimes as boring. Consequently, her diet is unhealthy, her mood is low and relationships are strained. Now and then there is a slight improvement and the blacklisted foods get tried. Occasionally, they are back to normal and she celebrates each little victory. These changes are encouraging her on the road to recovery, even if progress is slow.

Lucy’s experience is very much in keeping with other parosmia sufferers posting similar stories of horror online.

Parosmia is a common smell disorder. It has been linked to viral infections and usually begins after the patient appears to have recovered from the infection.

The fact it is popping up as a delayed symptom in COVID-19 does not surprise olfactologists (smell doctors) who are used to seeing patients with these problems. When viruses cause lasting problems with the sense of smell (post-viral olfactory dysfunction), it is probably because the infection has caused damage to the smell receptor nerves, making them unable to detect the smell molecules that dissolve in the nasal mucus.

Parosmia is believed to occur due to partial recovery of the smell receptors in the top of the nose. Because we recognise smells as mixtures of odour molecules, if some receptors aren’t working, the pattern recognition is affected, and this leads to a distorted signal, which more often is interpreted as unpleasant (troposmia), but can sometimes be a pleasant distortion (euosmia). Nonetheless, the symptom of parosmia is seen by olfactologists as an encouraging sign, even though sufferers find it very hard to contend with.

Smell training is a key activity to help overcome the problems of post-viral smell disorders. Not everyone finds it easy, though, so other self-help measures include other forms of nasal stimulation, such as sniffing horseradish or mustard, which activate the trigeminal nerve.

People experiencing parosmia should not suffer in silence. While this is not an area where there is a wealth of evidence to support treatment, olfactologists are used to dealing with these symptoms (including phantosmia) and will sometimes be able to suggest medical treatment that may help to moderate the symptoms. But it is clear that more needs to be done to establish evidence-based treatments for these disabling symptoms and a consultation is underway to boost research in this area.

People suffering from parosmia can get support and advice from Fifth Sense, a charity set up to help people affected by smell and taste-related disorders.

Carl Philpott receives funding from the National Institute of Health Research. He is affiliated with Fifth Sense.

2021-02-22
Previous Post: Biden and the Iran nuclear deal: what to expect from the negotiations
Next Post: ‘Only junkies’: how stigma and discrimination link to rise in drug deaths among Scotland’s poor