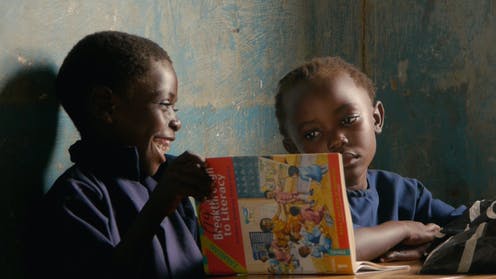 Over 2,000 languages are spoken in Africa, with multilingualism a common feature of everyday life. Across the continent, though, millions of school pupils aren’t taught in their mother tongue.

Zambia, for instance, is a country with a huge range of languages but just one official language: English. Intrigued by the disconnect between the languages spoken at home by children in Zambia and the English of their education, Alastair Cole, a lecturer in film practice at Newcastle University, and I set out to make a documentary about the linguistic experience of children in the classroom.

We filmed over nine months, following three children as they first discovered that the language they spoke at home would not be the language of their education.

Our film, Colours of the Alphabet, intended to convey the children’s multilingualism by using multicoloured English subtitles for each language spoken in the classroom. We used orange for Soli, green for Nyanja, pink for Bemba and white for English. This meant that viewers were able to recognise that at any one moment within a classroom, pupils were speaking several languages in an attempt to understand the official one.

However, this approach only worked for an English reading and speaking audience – perpetuating the dominance of English as a global language. We needed to make the film available in a way that reflected the linguistic diversity that we sought to champion.

Making the film accessible to audiences across Africa was a task too big for just two academics. We began to build partnerships. First, we secured distribution with a not-for-profit distribution and streaming network called Afridocs. Afridocs broadcasts the best African and international documentaries for free to 49 countries in Africa by satellite and online.

We then partnered with Amara, a free-to-use global subtitling software platform. Together with the UK-based Screen Language services and the Institute of Translation and Interpreting, we created an online workshop to teach translation and subtitling. The process of translation is a highly skilled activity, and our workshops, delivered over two months, included video lessons as well as interactive exercises and feedback sessions with the course leader.

Working with our Africa-based collaborator, Gertrude Kitongo, we set out to recruit mother tongue speakers of 27 diverse indigenous languages in Africa. These ranged from Swahili, spoken by about 100 million people in Kenya, Uganda, Tanzania, Rwanda, Burundi and South Sudan, to the minority tongue of Soli, which, in 1989, was estimated to have around 54,000 speakers in Zambia.

We were overwhelmed by the response and eventually managed to whittle down the applications to 54 people who took part in the subtitling workshop, and who we paid to translate and subtitle the film.

For one of our subtitlers, Annaliisa Amutenya from Namibia, it was the first time she had ever seen a documentary subtitled into her mother tongue, Oshiwambo. Another, Brighton Lubasi from Zambia, spoke of his pride at having a part in creating a visible affirmation of the literary, not just spoken, richness of the Lozi and Nyanja languages.

Our next step was to collaborate with Unesco to coordinate the first multilingual, continent-wide digital release of a documentary. This took place on February 21 2018, International Mother Language Day. We then made the film freely available across Africa in 30 languages – 27 African languages, plus English, French and Portuguese – thanks to funding from the Economic and Social Research Council.

Alongside the online film release, we launched a campaign on Facebook: #MyTongueMyStory. This encouraged members of the public to write about their experience of a monolinguistic education system in their own language. We kicked off the campaign with personal stories from the film’s translators.

Ultimately, the multilingual film content on the Afridocs platform reached over 200,000 people. The subtitling team now offer their services as the African Film Translation Network.

This year, we will take our project one step further, including even more languages. On International Mother Language Day, at the request of the UN, the film will be freely available in 40 languages to a global audience.

Nick Higgins and Alastair Cole received funding from the ESRC – this is mentioned in the article.

2021-02-18
Previous Post: Myanmar: trial of Aung San just the latest in a long line of unlawful prosecutions by illegal regimes
Next Post: Has Earth been visited by an alien spaceship? Harvard professor Avi Loeb vs everybody else