The model of an “inverted tree” for researching subcultures 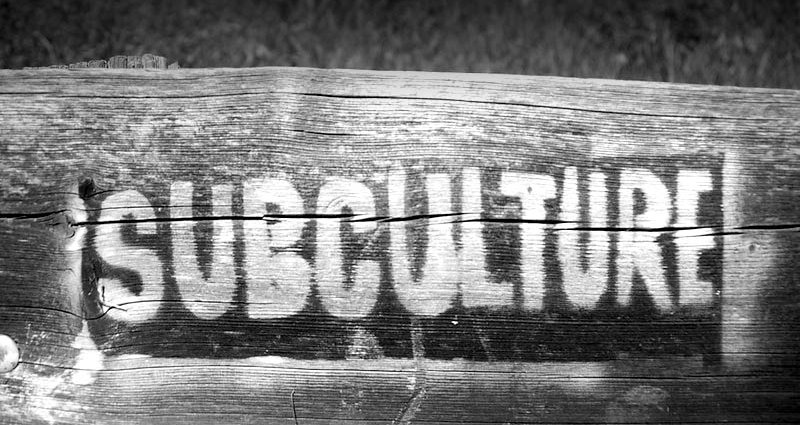 Since the end of World War II, countries in Europe and North America, along with many other countries in the world, have witnessed a significant transformation, signaled by the emergence of groups whose representatives have their own worldview and culture that is often contradictory to the declared policies of their states. Groups as such are called subcultures in sociology. Subcultures as a phenomenon are not unvarying, subcultures have changed and retransformed in fluctuating environments; some of them disappeared, but new forms arose or became a synthesis of pre-existing ones.

Any study of social development requires a particular model first, that could guide the researcher in his work by acting as a “navigation system” in the course of his intellectual work. I believe the most suitable model to study subcultures is an inverted tree, but first the historicity of this tool should be noted because the idea of the tree is not novel.

Philosophers and thinkers have repeatedly used the tree model since the Middle Ages. For example, a regular tree model (not inverted) was used as a visual aid for demonstrations and explanations. This approach was typical of the representatives of southern Italy’s criminal structures and Norman culture, among others. Following the model, the tree structure can exhibit a single world order and the organization’s design simultaneously. Speaking of a rarer model of the inverted tree, that exhibits tree roots are at the top and the crown at the bottom,  is inherent to a secret science about the universe. Historically, this model takes its origin in European mysticism.

On the next stage of mystical illustrations, models, and drawings, one can see straight and inverted tree models on the pages of old European scholarly works and treatises. Various scientists have attempted to analyze differing systematic phenomena through the model of a “straight tree.” There are cases of applying this model in the modern day to understand and conceptualize the specialties and characteristics of a business’ or company’s constitution.

A tree as a symbol has been frequently used, in particular, by psychologists to describe memory as an arrangement of memorization; it was also used as a decision-making tool and for various other means. Also, on the example of non-fiction studies, it can be concluded that our forerunners in science were guided by the model “tree” as a prototype in their research projects for comprehending different kinds of phenomena. However, I haven’t seen the application of an inverted tree to explain the phenomenon of a subculture.

The model of the inverted tree involves the vertical structure of history. Today, quite often, history is presented in the form of a horizontal line (the so-called “arrow of time” in sociology which combines the concepts of “past-present-future”). Thus, according to the inverted tree model, the past is at the top, and the present is at the bottom, in the crown. The logical model of the tree allows us to conclude the fact that a subculture can change, which is similar to the properties of a tree: the crown grows, it might become more voluminous, branches and leaves might fall; the crown might become thin, all leaves disappear, and in the spring, the sprouts appear again… In other words, the social body itself is in the constant dynamic. Such a tree can represent the dynamics and evolution in a subculture because the subculture’s roots always lie in the past and tend to retransform. When considering the period of the initial formation of subcultures, several important points should be covered. First, the number of “roots” of subcultures is always limited; the amount of “roots”, or the origins of subcultures comes to a total of 10. Therefore, modern subcultures have five permanent roots and five variables. The trunk represents a common field of environment, and branches of subcultures come out of one trunk; in other words, it forms a common knowledge domain of ideas. For example, the field of environment can be represented in the form of Zen Buddhism, Monroe Doctrine, Carlos Castaneda’s teachings, etc. Accordingly, it is possible to analyze the subculture’s core idea and the roots of a particular formation. It must be noted that not only a single idea shapes a subculture, but it might also be the case when it is a synthesis of several ideas. New subcultures can emerge through the synthesis of existing ideas, and new branches appear based on the roots and the information domain of one trunk. In some parts, branches diverge by producing different trends of a subculture. The same model of an inverted tree can be adopted in the examination of a single subculture. For example, each subculture has a root (or several); the same environment field; new branches may appear and diverge within a subculture—that is how radical trends occur. They are part of the subculture, but not an entire subculture. New trends or systems profess a somewhat distorted view or, on the contrary, they are ” a pure subculture.” Radical systems are branches of one subculture—within such formation, there may be several different lines or directions. There are cases when even radical formation develops within the subculture.

By constructing a model of the inverted tree, it becomes possible for a researcher to trace the history of a subculture’s development: what was the starting point, what became popular, what is considered adequate in the subculture, what is deemed to be in demand today, also, as a result of analysis, to identify “withered branches”— i.e., trends in the subculture that have not been recognized in the world. Instead of the former withered or fallen branches, new branches emerge through the method of synthesis. The synthesis of existing and new ideas form new currents. Different changes naturally occur over time in diverse subcultures. Just the way sap circulates in a tree, properties of the subculture (its sap) go through evolution and change multiple times, for instance, starting from the 70s to the present. Transformations take place as a consequence of the development of neo-movements, literature, and cinema.

This “subculture tree” model allows the researcher to draw a subculture, and  performs the role of a guiding vector in scientific research. In particular, the researcher goes through several stages while comprehending a subculture based on the example of its drawing. To understand a subculture or a group of subcultures, it is recommended to focus first on the tree’s roots, then a trunk (environment), then the trends or divisions, and a particular distinction of the subculture’s characteristics. Finally, a researcher analyzes the “fruits,” that is, what was generated by a specific subculture.

The fruits of the subculture are expressed in three components:

The model of an “inverted tree” allows one to contemplate and reason about the subculture’s structure, its formation, and stages of development. This model also visually represents a scale of human thought, as it organizes human consciousness in a way that allows one to research and make unmistakable conclusions effectively. The visibility of the results of conducting subculture research is essential, and this pattern in the form of an inverted tree at the end of the study guarantees that the researcher understands the subculture s/he investigated; s/he can accurately define its roots, environment, synthesis, the internal structure of the design, trends and fruits. It is not necessary to start looking into the roots; one might analyze the fruits first and gradually move towards the roots, or begin with the “environment” and subsequently continue to walk up and down the tree.

Additionally, the given model gives researchers a clear understanding of where and at what stage of the study s/he is at the given moment, and what else needs to be done scientifically to draw a complete subculture. In practice, it becomes sufficient to have this model in mind without keeping paper and pencil—the researcher can think without paper and quickly and easily navigate in his study. This model can also be used to study many other social formations, such as religions, and it is a powerful philosophical tool that allows you to explore any organization. However, it is exceptionally useful in exploring subcultural associations. Many other models allow exploring organizations, such as the block model or the dynamic model (defining the interaction of organizations’ systems and subsystems). Yet, it is impossible to use the latter for subculture research—the tree model allows us to solve this scientific problem.

As noted earlier, the model of the tree presented for analysis is not new. From my perspective, this model has not gained much popularity because modern religious scholars and researchers of subcultures are alien to the methodical basis and understanding of the parameters of research. Unfortunately, modern scholars often do not use research tools, as if they are not required. The practice of routine referencing and rewriting the works of others is becoming widespread. Instead of executing research, scientists synthesize each other’s knowledge and do not conduct their own research. I dare to express this trend in an affirmative tone because if studies were in fact organized and conducted, the associated scientists would have been in need of the appropriate tools and methodical apparatus to conduct highly sought research. Considering that the scientific task’s solution requires awareness and the development of the research model initially, sooner or later, provided there is solid scientific research, researchers would have also come to the model of an inverted tree.