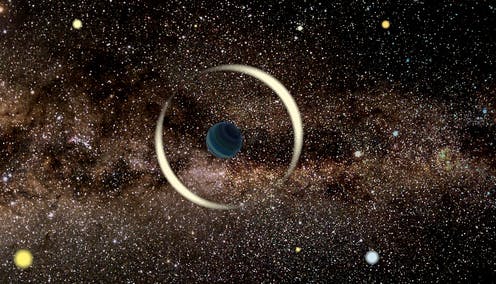 Most known planets orbit a star. These planets, including Earth, benefit from the star’s warmth and light. And it is the light emitted from these stars which makes it possible for us to see them. But there are also “invisible” planets, hidden from our gaze, which float, abandoned, through the cosmos. These dark, lonely worlds have no star to orbit, no light in which to bask, no warmth to be radiated by. They are the “rogue” planets – and astronomers have just found a new one, roughly the same size as Earth.

Planets are made from the debris left over after the birth of a star. These planets circle the young star in a thin disc of grains and gas and grow when these small particles stick and pull each other together until they clear their immediate surroundings. Things are chaotic in this world and collisions between planetary embryos, or proto-planets, are common. Stars tend not to form alone, but in clusters of hundreds or thousands at once, and encounters between their nascent planetary systems cause further havoc.

Young Earth is thought to have been hit by a Mars-sized body, knocking out enough material to form the Moon. But some planets faced a darker future: they were knocked out altogether, destined for a life in the vast coldness of space between the stars. These are the free-floating “rogue planets”.

When planets are still very young, say just a few million years old (Earth is more than 4.5bn years old) they are still warm from their formation and from the energy released by their continued gravitational contraction and radio activity in their cores. Large examples of such young but free-floating planets (think of a baby Jupiter) have been seen directly in regions where stars had just formed. But finding smaller rogue planets proved almost impossible until “lensing” was discovered.

Anything with mass bends space and causes light to deflect from a straight path. The result is that an object with mass focuses the light from a source behind it – amplifying it like a huge magnifying glass. This is called gravitational lensing. It was predicted by Einstein’s general theory of relativity and was first verified when stars were seen to be displaced from their usual positions when viewed close to the Sun while it was perfectly eclipsed by the Moon in 1919.

The effect of gravitational lensing has been observed in galaxies made up of trillions of stars, caused by the vast amounts of stuff in between galaxies and by stars lining up with other stars in the background. One observation was caused by a black hole in a “nearby” massive galaxy called Messier 87, in 2019. So even an “invisible” rogue planet could act as a gravitational lens – or micro-lens, as they can be so small.

One such “micro-lensing” event was attributed to the new rogue planet, called OGLE-2016-BLG-1928. The sighting of the amplification of the light from an inconspicuous star in the dense inner regions of the Milky Way galaxy only lasted 42 minutes.

This meant it had to be a small object and the estimated mass left no doubt that it had to be a planet not much different in size from Earth. The lensing planet was not found to be associated with a star. Lensing rogue planets have been found before, but this is one of the most convincing cases. As well as being the one most akin to Earth, OGLE-2016-BLG-1928 is also the smallest rogue ever found.

Large numbers of rogue planets criss-crossing our galaxy raise intriguing questions. Could life have formed and survived, or settled on such worlds? Perhaps technologically advanced civilisations could overcome the inconveniences of eternal darkness and an ice age with no comparison in Earth’s long and varied history? Maybe they harnessed nuclear power or became entirely non-biological?

That may sound like science fiction, but what are the chances of Earth running into such a planet by chance? This is not inconceivable. Only in the last couple of years, rogue asteroids such as Oumuamua and rogue comets such as Borisov whizzed through our solar system. It is unlikely a rogue planet would pass by us that close up. But it’s not beyond the realms of probability.

Earth has so far escaped banishment from the Sun. But one day, in about 4bn years, Earth too could go rogue. Because as the Sun ages, swells up and blows half of itself into space, Earth will either be swallowed by it, or be forced away. But it is unlikely to escape its gravitational attraction altogether. So as the dead Sun is degraded to a smouldering white dwarf, the Earth will face a similar fate to those other dark, cold worlds. Not entirely alone, but far away from the once warm and bright orbit of its star. 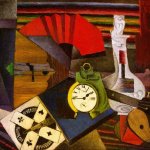 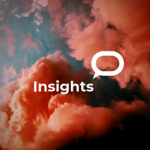