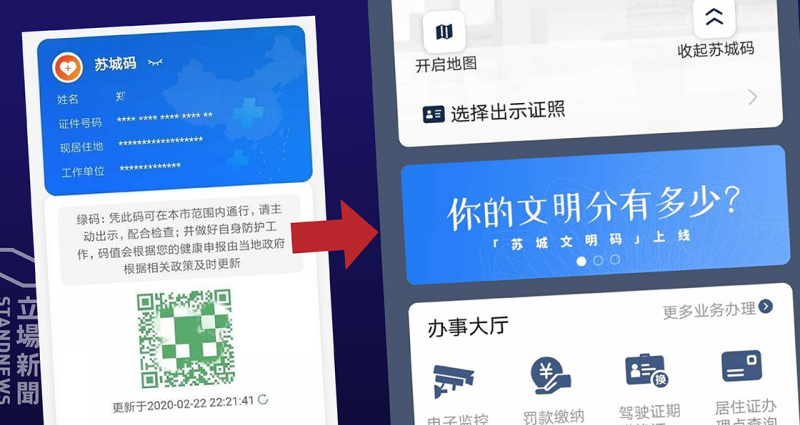 Despite censorship, criticism of the plan flooded Chinese social media

This a translation of a Chinese story published on the Stand News on September 7, 2020. It is published here under a content partnership agreement.

Building upon the successful implementation of its “health code” system in restricting citizens’ movement during COVID-19 pandemic, Suzhou — a Chinese city near Shanghai — attempted to launch a “civility code” in early September to rank citizens’ civility and award or punish them accordingly. But strong reactions from netizens forced authorities to postpone the plan.

The health code is a mobile app that keeps track of an individual’s health condition and controls their movements accordingly. For individuals who have to move around and get access to public service in the city, they have to sign in the mobile application. The system has been implemented in a dozen Chinese cities.

Guards at stores, malls, and public transport will scan a QR code on visitors’ mobile phones, and only those with a “green” code are allowed to enter. If a citizen has been potentially exposed to the virus, the QR code will turn “yellow” and they will not be able to access some facilities. A red code obligates a citizen to quarantine.

Suzhou city, known as “the Venice of the East,” was among the first Chinese cities to launch a health code system in February 2020. The health code is embedded in an application called “Suzhou City Code” (蘇城碼), which is a digital ID used to control all its residents’ movements during the COVID-19 outbreak. Suzhou was also one of a dozen cities chosen in 2018 to run a trial on the country’s social credit system to rank and adjust citizen behavior with an award and punishment scheme.

On September 3, “Suzhou City Code” had an upgrade and introduced a new function called the “civility code.” It would work similarly as the health code, only it would be ranking people’s behavior rather than their health condition.

The new civility code had two sets of indexes, “civility in traffic performance” and “civility in voluntary work performance”. According to various reports from mainland Chinese news outlets, each citizen starts with 1,000 civility points when they first sign in to the app. If they are found jay-crossing or drunk-driving, points would be deducted; if they contribute to voluntary work, they would gain extra points.

Suzhou city’s public security bureau explained in its official WeChat account that the objective of the civility code is to “construct a civility ranking system”. In the latter stage, more indexes would be added, such as “civility in garbage recycling”, “civility in dining behavior”, “civility in online behavior,” “civility in following law and order,” among others.

The bureau also said that those with high scores would have more advantages in seeking employment, enrolling in schools, and accessing both public and private services.

Despite heavy censorship measures, criticism of the plan flooded Chinese social media platforms. Yu Jian-rong, a famous Chinese sociologist, was one of the most outspoken critics. He said on Weibo:

[Dangerous civility code]… the issue at stake is: 1. Who is to decide on the quality and quantity of civility? 2. Who has the power to deprive citizens of their rights to public service in the name of civility?

A widely shared anonymous comment compared the system with wartime crimes against humanity:

[Suzhou civility code] A bunch of corrupted officials who refused to disclose their property / are having the power to rank citizens’ civility and issue related credentials! / Such system is similar to the “good citizen ID system” during the Sino-Japanese war, or the Jewish star badges used by the Nazis! / Their nature is the same / They are used by the evil thugs to suppress the ordinary people / to “mark, categorize and eliminate.”

The civility code has nothing to do with civility, it is a brutal measure in the name of civility….The development and application of information technology has exposed our private lives to others… Now they are using a microscope to look into your flaws and to manipulate your behavior according to their liking. You lose your privacy and dignity, fear and threats will be all around you.

After receiving criticism from netizens, Suzhou’s Office on Building Spiritual Civilization — a branch under the Propaganda Department to proactively promote good citizen behavior — announced on September 6 that the testing phase of the civility code had ended and the related authorities would modify the system, which would be implemented at a future time.

The Office said citizen criticism online was due to a misunderstanding and stressed that, during the testing period, 5,861 users signed up to the function voluntarily and, thus far, no one had been punished or discriminated against for having low scores.

Although the Suzhou civility code was withdrawn, many anticipated that it would be relaunched with a new name. As a popular comment on Weibo pointed out:

Anticipating that there will be more upcoming codes like “follow law and order code”, “truthfulness code”, “purity code” and etc. We have to empty the storage in our mobile phone to prepare for all these codes in our lives.

Written by The Stand News