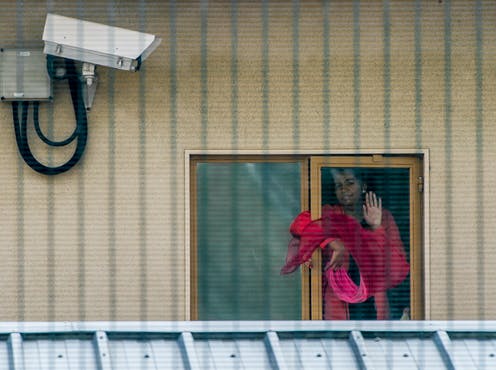 Long waiting times for asylum seekers, the tightening of rules for student visas – and more recently, convoluted procedures for EU citizens – are just some of the issues with the UK immigration system. A system that will likely get even worse given the impact of Brexit and the backlog of cases created by the coronavirus pandemic.

This all comes at a time when the UK immigration system is undergoing significant change. Freedom of movement for EU citizens will come to a stop by the end of 2020 in the UK. And a new points-based system is being introduced.

This could lead to more delays, backlogs, refused visa requests and an increase in enforced removals and detention of asylum seekers by immigration officials. As it stands, in 2019, 48% of asylum seekers were forcibly returned to their home country – with 98% of those made to return kept in detention while in the UK.

And according to The British Educational Research Association, international students are also at risk of removal given their inability to study during lockdown.

Who gets to stay

Part of the problem in all of this is that the UK immigration system aims to create a “hostile environment” that makes staying in the UK as difficult as possible for people. Access to work is restricted as is housing, healthcare and bank accounts, with zero attention paid to the integration of asylum seekers. The hope is that people choose to “voluntarily leave”.

The UK also lacks a clear stance on the enforced return of travellers and migrants to their place of origin. The UK has not signed the EU Return Directive which provides criteria as to when return migration should occur. And instead, the government has said it will formulate its own policy in this area.

The focus of which is likely to remain on [controlling immigration] [https://www.compas.ox.ac.uk/2017/is-voluntary-return-the-new-way-forward-for-managing-irregular-migration/], so will likely build upon the present circumstances whereby enforced removal of asylum seekers is used to serve political purposes and reduce immigration numbers – with seemingly little regard for migrants’ circumstances.

Back in 2007, a report for the European Migration Network stated that more research needs to be carried out on enforced and voluntary returns within the UK. The report highlighted how, without this, it would be difficult for evidence-based changes to be made.

But research still remains limited and unsystematic. And the Home Office statistics still lack considerable detail – with often only limited information available as to the reasons for a person’s removal.

The Windrush scandal is a prime example of this issue. The Migration Observatory estimates that 57,000 migrants who arrived in UK before 1973 were put at risk of deportation, homelessness and unemployment. In some cases people were also refused NHS medical treatment.

The Home Office believes that 160 Windrush migrants have been incorrectly detained or deported since 2002. The 2018 government-sponsored Windrush Lessons Learned Review has since emphasised the need to improve monitoring and evaluating of immigration policy with a focus on equality and human rights. It also suggests measures should tackle the “target-driven” culture within the Home Office, along with a simplification of the system.

In a bid to tackle some of these criticisms, the government has promised mandatory training for all Home Office staff on the history of migration and race in the UK. It’s hoped that this, along with a higher proportion of BAME employees in senior roles, will offer a more compassionate “people not cases” approach.

The government has also committed to opening up the Home Office to greater scrutiny and to impact assessments on the potential implications of policies. But this all contrasts sharply with Brexit and the UK goverenment’s overall aggressive approach towards immigration.

Just look at the way the EU Settlement Scheme – for EU citizens who want to remain in the UK – has been rolled out. Along with the significant impact it has had upon people’s mental health, wellbeing and sense of belonging in Britain. And problems accessing the scheme have only got worse as a result of COVID-19.

The UK parliament has reacted strongly against the conservative government’s approach to this settlement scheme, fearing discrimination of EU citizens and another “Windrush catastrophe”.

Ultimately though a system that seems to disregard fundamental human rights in the way it regulates and processes people is bound to continue creating vulnerability for migrants. And no doubt the impact of Brexit and the pandemic will only make this worse.

Samantha Carney does not work for, consult, own shares in or receive funding from any company or organization that would benefit from this article, and has disclosed no relevant affiliations beyond their academic appointment.

2020-09-09
Previous Post: When did we become fully human? What fossils and DNA tell us about the evolution of modern intelligence
Next Post: Why the UK government is paying social media influencers to post about coronavirus