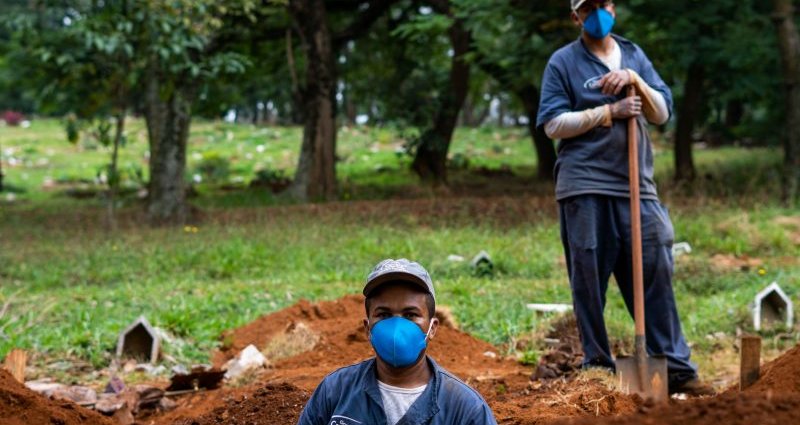 “The main demand of the workers is to survive”

This story was written by Lucas Veloso. It is published here under a content partnership between Global Voices and Agência Mural.

Open graves, coffins and relatives’ tears are part of the work routine of James Alan Gomes, a resident of Cidade Tiradentes in eastern São Paulo, Brazil. He is one of the more than 400 gravediggers that work in the city’s public cemeteries.

James has been working as a gravedigger in São Paulo for over five years, a profession which is often met with prejudice. “There are people today who appreciate it, seeing that our work has increased, but there are others who avoid getting close to us because they think we’re infected,” he says, commenting on the increase in burials due to COVID-19.

In Brazil’s largest city, the new coronavirus pandemic had killed 9,883 people by August 2, and another 5,783 deaths are still being investigated to determine if they were caused by the disease. This would would increase the number to over 15,666. Brazil is currently the country with the second highest number of deaths from the disease with 94,702 deaths, behind only the US.

These numbers directly impact the lives of those who work with death every day, like gravediggers. In Vila Nova Cachoeirinha in northern São Paulo, Geraldo* says he has always suffered prejudice because he works in cemeteries, but with the pandemic, it got worse. “I always got comments and such, and now it’s even more [frequent]”, he said.

As well as prejudice, the amount of work has also been an extra challenge. “The schedule is difficult due to the increase in burials, it gets a bit more tiring for us,” Gomes remarked. “We’ve always had a hectic schedule, but with COVID-19 it’s intensified. 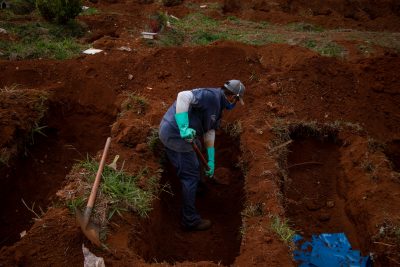 Work in Vila Formosa has become more intense since the beginning of the pandemic | Image: Léu Britto/Agência Mural

Gomes works in the largest cemetery in Latin America, Vila Formosa. Due to the increased numbers, 8,000 new graves have been installed on the site between April 19 and June (the city council built 5,000 more graves in other public cemeteries).

According to São Paulo’s city council, in the Vila Nova Cachoeirinha cemetery alone about 2,000 ditches were dug and in São Luís, in the south, about 3,000. Another change was the capacity for burials, increased to 400 per day. The historical average is 240 burials per day in summer and 300 in winter.

Gomes also feels the pain of families who have lost loved ones. Many lament the lack of care for relatives with the disease. “I hear here from many [families] that they died because they didn’t take this pandemic seriously,” he said.

The saddest day, he recalls, was when he saw a father who had buried his nine-month-old daughter and, two weeks later, returned to bury his wife — both because of COVID-19.

On top of everything else, the risks of his work cause even more fear. “No matter how much we use PPE (Personal Protective Equipment), with one oversight we can get infected,” he said.

The aunt of Ronaldo Cavalcante, 43, a self-employed resident of Jardim Real in Grajaú in southern São Paulo, was one of Brazil’s thousands of victims of the new coronavirus. At 81, she died after 11 days of the first symptoms of the disease.

The diagnosis was slow to come back, according to her nephew. “She was already old and had health problems. She was sick and went to the hospital. They didn’t notice anything different when she was there and she came home. Then she got worse and went to another hospital where they found she was infected,” he recalled.

The mourning was made even more distressing by the protective measures for burials. “The person was unable to receive visitors […] all that is very difficult for the family,” says Ronaldo. 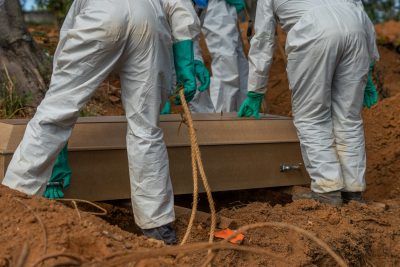 Carrying a coffin is one of the most delicate parts of the process, according to the undertakers | Image: Léu Britto/Agência Mural

In the city of São Paulo, the funeral services now have a series of measures adopted to prevent infection. Access to the funeral rooms is limited to a maximum number of 10 people. The time is limited to one hour, to avoid crowding.

Since March 30, victims of COVID-19 or suspected cases have been wrapped in a waterproof plastic bag, still placed when still in the hospital, in order to provide greater security for undertakers, drivers and other workers who may have contact with the bodies.

Saddened by the death of his aunt, Cavalcante says he sees people’s disbelief with the disease’s severity. “This is really serious. Now, for example, we’ll have to test the rest of the family to see if nobody else was infected.”

The epidemic compelled the city authorities to increase the number of emergency workers. In the first week of April, 220 outsourced employees began working in the cemeteries.

According to Sindesp (Union of São Paulo City Employees) the city had fewer undertakers than needed. There were about 200, when in reality, at least 350 would be needed. With the pandemic, this number was exceeded by hiring third party workers. 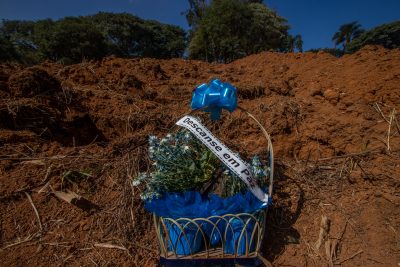 In São Paulo, to work as an undertaker it is necessary to pass a public sector examination, to compete with other candidates, and to have at least a complete primary education. The initial salary varies from BRL 775 to BRL 1,100, and can reach BRL 1,500 for an eight-hour day (top salary is around 281 US dollars). The gravediggers interviewed by Mural Agency, recount that there are days when they work more hours because of the numbers.

With the pandemic, Manoel Noberto Pereira, the union’s director, said the main demand of the workers is to survive the virus.

Safety equipment such as aprons, gloves and masks are essential. “Our main concern is with safety equipment in order to be able to provide this service to the public,” he commented.

For him, the situation in other South American countries made São Paulo treat the case urgently. In Ecuador, during the month of April, scenes of COVID-19 victims being lain in the streets were shared around the world. Guayaquil, the hardest hit city, received cardboard coffins to try to respond to the increased pressure caused by the pandemic.

Pereira says that the union mobilization was important to get the equipment delivered by the authorities and for them to face the work, despite the stigma. “The prejudice towards us is old, but it is further strengthened with obscurantism and lack of information among the public about our work”, he says.

*The name was changed at the interviewee’s request.