Why children should be watching TV with the subtitles on 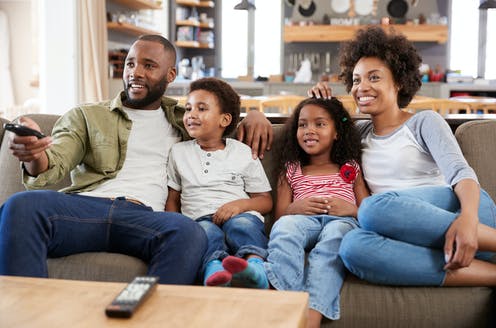 Watching subtitled films, TV programmes and videos has huge benefits for children. It can help them boost their reading skills and learn other languages, as well as providing more inclusive access for children with disabilities or those who speak a minority language. This small change – turning on subtitles – can make a big difference.

Research shows that turning on subtitles in the same language as the TV show or film can indeed improve children’s reading skills. Watching video content with same language subtitles, both when used as a teaching tool and for entertainment outside the classroom, can improve children’s decoding skills – their ability to use their existing knowledge of letters and sounds to correctly pronounce words.

It can also help them improve their vocabulary, and boost their comprehension skills and reading fluency.

Subtitles have also been shown to improve the literacy skills of children who are economically disadvantaged, those who are struggling with reading, and minority language speakers learning the official language of the country in which they live and receive schooling.

The benefits of subtitles for children have been raised recently by the Turn on the Subtitles (TOTS) campaign, which calls for broadcasters and streamers to turn on the subtitles by default for viewers aged six to 10. It is also seeking to raise awareness among parents of the considerable benefits that subtitles can bring in improving children’s reading skills.

The TOTS campaign is backed by a panel of leading experts. It is supported by well-known figures such as children’s author Cressida Cowell and TV presenter Floella Benjamin, who signed a letter urging broadcasters and video-on-demand providers to turn on the subtitles for young viewers.

Same language subtitles do not just bring benefits for children’s literacy skills. While the efforts of the TOTS campaign are laudable, it is important to highlight that subtitles can do even more than improving children’s reading skills. They also fulfil the fundamental function of providing access to viewers who are deaf or hard of hearing.

There are an estimated 50,000 children with hearing loss in the UK and young people who are deaf or hard of hearing are still having to fight for better subtitling on TV and social media. Subtitles may also bring educational benefits for young viewers with other disabilities, such as autism and dyslexia.

Watching foreign language films and television programmes with subtitles in their first language is a motivating way to support children as they begin learning other languages. Research shows that children can learn vocabulary and improve their proficiency in other languages incidentally, just by watching subtitled foreign language films and television programmes. Subtitles can also help them learn another language intentionally, as part of a course of study.

Watching subtitled foreign language films, television programmes and videos also has the key potential to improve children’s intercultural awareness. Internationally sourced programmes on British television for children are largely drawn from the US and research shows that children’s viewing is dominated by American content. As a result, children in the UK do not have much access to content produced in non-anglophone countries, at least not on their television screens.

Giving children greater access to high-quality, educational media content in other languages would give them opportunities to learn about the lives of children in other cultures and to identify with children who speak languages other than theirs.

Boosting children’s exposure to subtitled foreign language films and television programmes would be a simple, inexpensive way to promote their learning of other languages. Encouraging children to learn other languages is of crucial importance in the UK at the moment, given the decline in language learning over the past 20 years.

If broadcasters and VOD providers turned on the subtitles by default and added more subtitled foreign language films and television programmes for children to their schedules and online provision, children would also benefit more from subtitles on their screens at home.

At school, subtitled videos could be put to more use by teachers and providers of educational media content as a motivating, engaging aid to improving literacy and language learning.

Children around the globe are spending more time in front of screens and using more multimedia resources than ever. As a result, now is the perfect moment to raise awareness of the educational benefits of subtitles.

Sharon Black receives funding from the Erasmus+ programme of the EU. She is affiliated with the European Association for Studies in Screen Translation (ESIST).

2020-09-02
Previous Post: ‘I don’t want my friends to know’ – young people on growing up with Crohn’s or colitis
Next Post: This ancient Chinese anatomical atlas changes what we know about acupuncture and medical history