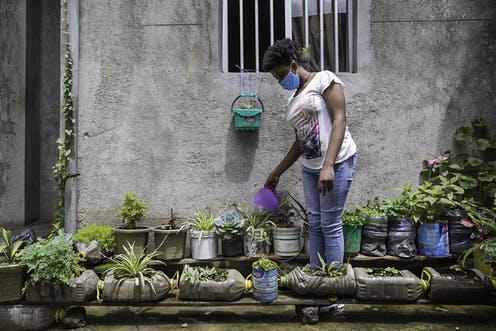 For many young people around the world, the economic effects of lockdown policies have been more significant than the health impacts of coronavirus. Young people are going hungry, facing widespread job losses or suspension without pay, and severely disrupted education, according to the results of a new phone survey of 19-year-olds and 25-year-olds in Ethiopia, India, Peru and Vietnam.

The phone survey was part of our Young Lives project, which has been following young people born in poverty in these four countries since 2001 to investigate the drivers and impacts of child poverty. We interviewed just under 10,000 young people between June and July about their experiences of COVID-19 and lockdowns in their countries. We found high levels of anxiety about the current situation.

So far, the health impact of the crisis has been higher in Peru and India than in Ethiopia and Vietnam. In Peru, around 4% of the young people who were surveyed said they had been infected, compared to 2% of the respondents in India (based in Andhra Pradesh and Telangana) and less than 1% in both Ethiopia and Vietnam. In both Peru and India, around 6% of the young people also believed someone in their household had been infected, but only around one in three said the person had been tested for the virus.

The crisis had less of an impact on food security in Vietnam than in the other countries. One in six of the households we surveyed in Peru, India and Ethiopia ran out of food at some point since the beginning of the crisis. This percentage was even larger among households that faced food shortages in our last visit in 2016 – and about twice as high in India. In Vietnam, the proportion experiencing food insecurity was much lower at 4%.

Our respondents received varying degrees of government assistance. In India, more than 90% of households received at least one form of support from the government during the lockdown, although in many cases the support consisted of a small basket of food or face masks. This compared to around half of those in Peru, falling to just 6% in Ethiopia.

In all the countries, support was relatively well targeted, reaching proportionately more of those households that reported food insecurity during the crisis. However, in Peru, despite every vulnerable household being eligible for a direct cash transfer, only 42% of those we surveyed received one. This could signal either a targeting problem, a delay in payments, or both.

Job losses or suspension without pay are widespread even in Vietnam – the country least-affected by the virus – and remote working is the exception rather than the rule. Across the four countries, many of our 25-year-old respondents lost their jobs, and informal workers with no written contract were particularly severely affected. In Peru and India, seven out of ten respondents had reduced or lost their source of income due to lockdown, six in ten in Vietnam and four in ten in Ethiopia.

Read more:
Vietnam has reported no coronavirus deaths – how?


The proportion of those who lost income or employment was higher in urban areas than rural areas, and overall more men were affected by these losses. Remote working has been possible only for a minority of 25-year-old workers living in urban areas. In India, 28% of those we surveyed said they were able to work from home during the outbreak, falling to 20% in Vietnam, 18% in Ethiopia and 17% in Peru. We found the percentage was much higher for those living in households better equipped to take protective measures against coronavirus, presumably due to better access to the internet and the nature of the work undertaken.

With schools and universities closed very early on in the outbreak in all four countries, the interruption to education was striking. But some were more likely to have their studies interrupted than others. Access to study from home was slightly higher for women than men in all countries, and wealth and parental education almost doubled the chances of being able to study at home.

In Vietnam, almost 90% of the 19-year-old cohort accessed remote learning, falling to 70% in Peru, and 38% in India. In contrast, only 28% in Ethiopia continued to learn remotely, and this fell to 14% if their parents had no education.

Although slightly more 19-year-old women have been able to continue their studies online than men, wide disparities emerged in caring responsibilities. In all countries except Peru, more than double the number of young women than men have had to take on extra caring responsibilities during the lockdown. The disparity is particularly striking in India and Ethiopia.

Levels of anxiety about the current situation are high, especially in India. We asked our young respondents whether the statement “I am nervous when I think about current circumstances” applies to them. We found stress levels were worryingly high – in India over 90% of respondents said the statement applied or strongly applied to them. In Vietnam and Ethiopia, 65% agreed with the statement. Peru had the lowest anxiety levels, despite being relatively worse affected, with just under 50% of respondents feeling nervous.

We’re now conducting a second phone survey asking for more detail about these young people’s employment experiences and how the crisis is affecting their working life, home life and education.

Catherine Porter receives funding from the Economic and Social Research Council, and the UK Department for International Development.

Alan Sánchez, Douglas Scott, and Marta Favara do not work for, consult, own shares in or receive funding from any company or organisation that would benefit from this article, and have disclosed no relevant affiliations beyond their academic appointment.