School run: cutting car use will take much more than educating children and parents 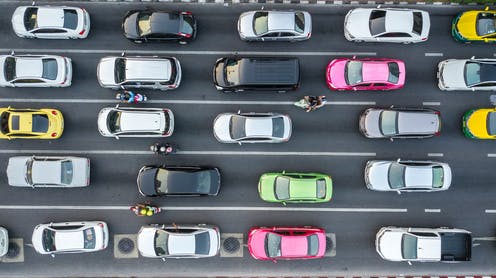 As the summer holidays come to an end and children return to school following lockdown, there couldn’t be a better time for us to consider the school commute. Nowadays, many children in the UK commute to school by car. But getting more parents to ditch the car for school journeys and switch to more active modes of travel, such as walking or cycling, is of great public health importance.

Using a car to ferry kids to school has a large impact on the environment and society. If more parents ditched the car for school journeys, air quality would be greatly improved. Following the introduction of lockdown travel restrictions, air quality in the UK improved substantially – in mere weeks – showing what can be achieved when fewer cars are on our roads. Air pollution has the greatest effect on children, as their lungs are still developing and they breathe more rapidly and closer to the ground than adults.

Why are so many children driven to school?

In the UK, almost 80% of households own one car and almost 40% own two. As car ownership has increased, the public and private investments complementing it have too, which has enhanced road capacity, made car travel easier and car ownership more valuable and essential to private and public life. Roads have widened and are reserved for cars, not pedestrians, car parking is abundant, and people’s everyday schedules require them to travel to places further and further afield.

It’s not just towns and cities – neighbourhoods are also designed and built on the assumption of universal car access. This assumption and, indeed, social norms make car ownership in many ways a precondition for social inclusion.

The rise in car ownership has led to more traffic on our roads and fewer children walking to school. What we have now is a social trap. Influenced by the many cars on the school-to-home route, parents opt to drive their children to school as a form of protection from the other cars. The clogged traffic and parked cars on narrow pavements only add to these parents’ safety fears.

Increased road traffic has driven children indoors and turned the streets empty. In her book, The Death and Life of Great American Cities, Jane Jacobs wrote about how: “Eyes on the street, keep streets safe.” In lots of communities in the UK, there are few eyes on the street. This only compounds parents’ fears over children’s safety. Streets once belonged to the people living in them. Now they belong to the car.

As cities have expanded under suburban sprawl, commuting distances to school have increased. They are longer now than they have ever been before. This is another reason more children travel to school by car now than they used to. Less than half of all children in England attend their most local school.

An education policy that lets parents choose their child’s school compounds the issue of suburban sprawl. Those parents that are able to exercise choice do so, and in some cases travel great distances so that their child attends the best-performing school. Once school choice has been decided, so too has children’s mode of travel to school. Longer school commutes equals more car travel.

If distance alone determined how children travelled to school, then you would think the calculus would be different for cycling. Most trips to school for primary school children are under two miles. They are slightly longer for secondary school children, but even a casual riding pace covers three miles in 15 to 20 minutes. The prospect of cycling to school, though, is unthinkable for most children. It’s simply too dangerous.

More children cycle to school in Copenhagen, Denmark, than they do in UK cities, not because they have the “cycling gene” but because cycling is prioritised over cars, enabling children to get from A to B more easily and quicker than the car.

In Copenhagen, where cycling is prioritised, cyclists have separate lanes to cars and separate traffic lights, which turn green ahead of those for cars, allowing them to move off first. Cycling in Copenhagen is enjoyable and safe for children. It’s not in UK cities.

Is there a better way?

Cyclists rule in Dutch cities such as Amsterdam, but their elaborate network of safe and comfortable cycle paths and lanes haven’t always existed. Walking and cycling were once dangerous pastimes in Dutch cities, and many children were injured as a result of taking to the streets. The Stop de Kindermoord (stop the child murder) campaign is a great example of how fierce activism can enact change in transport policy. The Netherlands now boasts over 20,000 miles of cycle paths, and more than 25% of trips are made by bike, [rising to 60% in some cities], compared with 2% in the UK.

We need to start by slowing motor vehicle traffic on our roads. Local councils have powers to lower speed limits in residential areas to 20mph. And we know these policy measures reduce pedestrian casualties, especially among children. Children will be more inclined to walk and cycle to school when they have the reassurance they’re not going to be injured on the way.

We need to claw back our street space. Nowadays, most neighbourhoods are designed for cars, not pedestrians or cyclists. We need a more balanced distribution of road space with cars, with wider pavements and more cycle paths. Cities that build protected and separate lanes for cyclists end up with more cyclists, and safer roads for people on bikes, in cars and on foot.

We know that commute distance determines whether children travel to school by car, on foot or bike. So we also need to make our communities more localised so that all children have access to essential amenities, including a local school. Any behaviour-change programme to reduce car use for school journeys will be limited in the long term when there’s no requirement for children to attend their local primary school.

Providing children with road safety education is often seen as the magic bullet to changing school travel behaviour and improving children’s safety when they’re walking and cycling. Great effort and expense go into teaching children road safety and cycling skills, through schemes such as the Bikeability programme.

The reality is these programmes don’t ensure children have somewhere to walk and ride safely. Nor do they significantly reduce child pedestrian injuries and deaths. It’s the environment we need to change. Not just for the children who already walk or cycle to school, but for the many children who are put off walking or cycling to school because of safety concerns.

In the UK government’s Cycling and Walking Investment Strategy, it’s stated that environmental changes are needed to support walkers and cyclists if we’re to reduce car dependency on our roads. Little, though, is being done to see this through. Transport planning and the allocation of government funding continue to marginalise walking, cycling and children’s mobility. Because of this walking and cycling to school remain far from the mainstream transport planning agenda.

The UK government, for example, spent £95m in 2016-17 on walking and cycling (£2.07 per person annually outside London and plans to spend only £33m in 2020-21 (72p per person). Over the same five-year period, funds for the Roads Investment Strategy are set to rise from £1.83 billion to £3.86 billion. In contrast, other European countries, such as Denmark, spend almost £20 per head each year on cycling projects – the vast majority going on improving infrastructure.

Tackling the real causes of car dependency on the school commute would benefit children, society and the environment. It would solve several public health challenges.

If ditching the car for school journeys means more activity for children, safer and healthier environments and stronger communities, then there is little to lose and much to gain. Car traffic on the school commute blights our communities in the way open drains blighted Victorian towns.

Getting cars off our streets could be the next big public health advance. We need to decide who our streets are for: cars, or walkers and cyclists?

Rob Noonan does not work for, consult, own shares in or receive funding from any company or organisation that would benefit from this article, and has disclosed no relevant affiliations beyond their academic appointment.