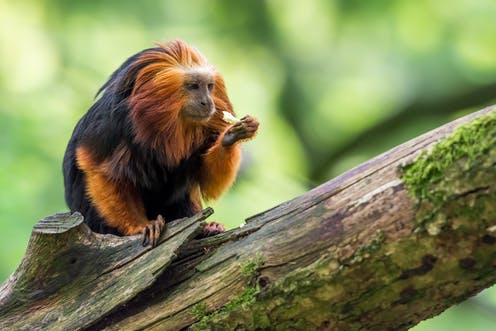 The internet is filled with blogs and articles offering advice for parents who are trying to coax children into eating greens. Anyone with kids can relate to stories of mealtimes becoming a succession of attritional confrontations, where you cycle through ineffectual strategies before accepting the reality of the situation and plead with your toddler to simply “take one bite of broccoli”. In the end, it doesn’t matter how much gravy you pour on fish, or cheese you melt on cauliflower – fussy toddlers know what you’re up to.

If we could converse with animals, they would also relate to these stories, as many species have a seemingly irrational dislike of anything unfamiliar and are more likely to eat new food after watching other individuals try it. Fussy eating can be an important way of avoiding toxic food, as witnessing other individuals eat new foods might tell them that it’s safe.

But fascinatingly, fussy eating may also indicate the presence of teaching in animals. Despite 30 years of research on the topic, there are still few examples of teaching in other species, making it difficult to understand how such behaviour might have evolved. My colleagues and I recently conducted research in the Atlantic forest of Brazil that provides new evidence that some animals may effectively teach their young what foods are safe to eat.

There are plenty of examples of fussy eating among animals. Young marmoset monkeys are slow to eat new food when alone, but are more willing to take a risk and try it if they are surrounded by family. Similarly, capuchins eat more unfamiliar food when group members also do so.

There are instances where food handling is linked to teaching in animals. The way in which meerkats show their young how to safely handle scorpions for eating is one well-known illustration. At first, young pups are given dead scorpions to familiarise them with the dangerous insect. As the meerkats grow up, adults remove the sting from live scorpions so that the pups can learn how to deal with the prey. Then intact animals are gradually introduced.

As a behaviour, this meets the three criteria scientists use to identify teaching in animals. An individual changes its behaviour in the presence of an observer, at a cost or no benefit to themselves, and this change leads to learning in another individual. In the case of the meerkats, although an escaped scorpion might represent a lost lunch, the exercise leads to learning in the young observer.

This kind of research has helped challenge the long-held assumption that teaching is a uniquely human practice. But the overall dearth of evidence means there is still debate.

In particular, it’s not always clear that instances where animals learn to eat new foods because of other individuals around them really meet the criteria for teaching. For example, there is limited evidence that adult golden lion tamarin monkeys, which are known to have a varied diet that includes insects and fruits, might teach their young about diet by sharing and transferring food.

If such food transfers do have a teaching function, we would expect them to meet the three criteria I mentioned before. The tamarins would transfer more unfamiliar food than familiar food because this would create the opportunity for learning.

On two recent visits to Brazil, we studied this behaviour by introducing familiar and unfamiliar foods to wild groups of tamarins. Initially, we introduced these foods when young tamarins were dependent on their family, enabling us to look at how adult tamarins transferred food within their family group.

Despite not clearly demonstrating teaching because it doesn’t meet all the criteria, this evidence appears to show that adult tamarins assess new food first before passing it on to others. This is still significant for juveniles, as they learn about what to include in their diet from the food that they receive from adults.

It is possible that food transfers in golden lion tamarins serve several functions simultaneously, depending on the identity of the individual receiving the food, and the food type being transferred. Further research could look at how tamarins transfer insects to see if there is a general pattern.

We also need to investigate whether adult tamarin gain any benefit, such as decreased harassment or increased social bonds, by transferring food to their young. Such information would help us come closer to understanding whether some animals really can be taught to overcome their fussy eating.

2020-08-24
Previous Post: Why airlines that can pivot to ultra-long-haul flights will succeed in the post-coronavirus era
Next Post: Here’s why this feminist philosopher has high hopes for Belarus’ protests · Global Voices