South China Sea: after all its posturing, the US is struggling to build a coalition against China 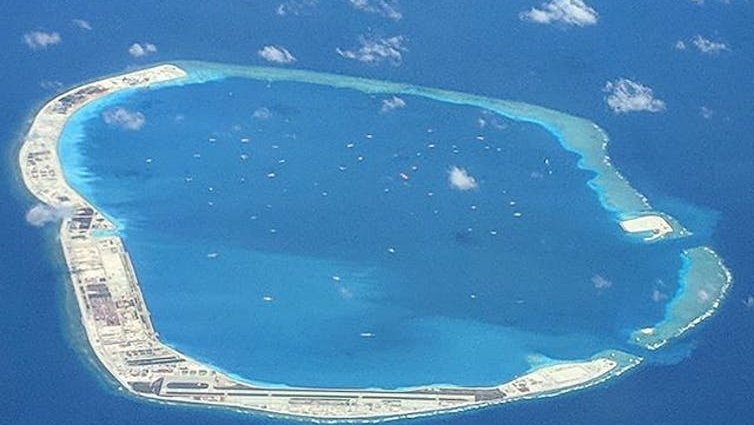 As tensions continue to mount in the waters surrounding the contested islands of the South China Sea, a US navy aircraft carrier conducted exercises in the region on August 17. This came after the Trump administration hardened the US’s longstanding neutral position on China’s maritime claims in the South China Sea.

In May 1995, following China’s occupation of Mischief Reef in the South China Sea – which is also claimed by the Philippines, Vietnam and Taiwan – the US announced that it would take “no position on the legal merits of the competing claims to sovereignty over the various islands, reefs, atolls and cays in the South China Sea”.

But the US has not remained neutral on how the multiple disputes in the region should be managed or resolved – something we’ve written about in a recent book.

Pompeo’s statement was followed a few days later by a speech from the US secretary of defense, Mark Esper, in which he accused China of “brazen disregard of international commitments”. He said China had bullied nations around the Pacific, and that its aggressive tactics in the South China Sea obstructed other countries’ rights to fishing and natural resources.

Two shoals and a reef

Pompeo’s announcement deviated from 25 years of US neutrality over three key issues. First, the US now argues that Mischief Reef and the Second Thomas Shoal, located 130 nautical miles and 105 nautical miles west of the Philippine Palawan Island respectively, are not Chinese but Philippine territories.

Second, the announcement amounted to a declaration that the People’s Republic of China (PRC) has no lawful territorial or maritime claim to James Shoal. Although the Chinese government claims James Shoal as its southernmost territory, it is an entirely submerged feature, 50 nautical miles from Malaysia and 1,000 nautical miles from China’s coast. Under international law, underwater features cannot be claimed by any state. So the US declared that James Shoal “is not and never was PRC territory”.

And third, Pompeo asserted that China had not put forward a “lawful, coherent maritime claim” and a legal basis for the “nine-dash line” in the South China Sea which it uses for the basis of its territorial claims. Under international law, sovereignty extends 12 nautical miles into the seas surrounding a land feature that can sustain human habitation. This means the US also does not accept China’s claims to a 200-nautical-mile exclusive economic zone in the region, far beyond 12 nautical miles surrounding any of the islands, atolls, reefs or rocks.

Still, except for the two shoals and Mischief reef, when it comes to the ownership of the Spratly Islands, which are claimed by Brunei, China, Malaysia, the Philippines, Vietnam and Taiwan, the US has stuck to its longstanding position of neutrality and not taken a position.

The strengthening of the US position on the South China Sea signals an effort to build a coalition of allies and partners to counter and – in Esper’s words “openly compete” with – China. In more substantial terms, the US may be considering deeper defence support to regional states such as the Philippines and Malaysia, which has effectively managed James Shoal, to confront Chinese encroachment there.

To date, only Australia has agreed to pursue “increased and regularised maritime cooperation” with the US in the South China Sea. Despite American pressure on Canberra to participate in operations guaranteeing international freedom of navigation surrounding disputed features such as reefs or islands, Canberra has so far resisted a specific commitment to conduct operations within 12 nautical miles of the features. While Australia rejects China’s illegal maritime claims, it doesn’t want to inflame further tensions over the sensitive sovereignty issue of disputed islands and their surrounding waters.

In contrast to Australia, south-east Asian states such as the Philippines are more reticent about working with the US to rein in China’s expansionism.

The inherent contradictions between the Trump administration’s America First strategy and the current calls for a coalition against China remain a sticking point. Trump has never attended an East Asia Summit, and his administration’s denigration of regional alliances has reduced American capacity to create a coalition of like-minded partners to support its position in the South China Sea.

Rhetorical posturing against China will not inspire regional allies to rally to America’s side while it trumpets its America First policy. A better US strategy would be to rebuild relations with democratic allies, such as Australia, Japan, South Korea and even Indonesia. But the Trump administration’s attempts to permanently harden US policy towards China, without prior consultation with the rest of the world, will make it harder to build much needed collective resilience against China’s activities in the South China Sea.

Anisa Heritage is affiliated with the Royal Military Academy Sandhurst. The opinions expressed are the author's own and are solely drawn from open-source published research and data.

Pak K Lee does not work for, consult, own shares in or receive funding from any company or organisation that would benefit from this article, and has disclosed no relevant affiliations beyond their academic appointment.