Is moving to Canada the real American Dream? · Global Voices

“American Flag on Canada Day 2008″ by Antony Pranata is licensed under CC BY-NC-ND 2.0

Call it an American’s Canadian moment.

Shortly after a remote work meeting at a local café in early February, Victoria Heath, an American living in Toronto, witnessed something extraordinary. A man approached the barista and asked for water. As he turned to reach for a cup, the man snatched the tip jar. Startled, the café staff tried to convince him to surrender the jar, even offering a few dollars and free food. “I’m sorry Sir, but I have no money,’’ the man said, with obvious remorse, and walked out with the jar.

The transgression, to Heath’s surprise, produced no further drama. And in a gesture of sympathy, some patrons found an empty jar, and began to fill it with cash.

“This was a surreal thing for an American to witness, because there were no threats or aggression thrown at this man. I’m not even sure the police were called,” Heath later wrote on LinkedIn.“There was just the calm understanding that the man meant no physical harm, and probably desperately needed the money.”

With its steel-and-glass towers, cadres of emotionless commuters, and die-hard sports fans, Toronto may look just like any American city. Yet it is moments like Heath’s that drive home a fact that’s hardly a secret: Canada can feel like a world away from the U.S.

In 2018, I left China, where I was born and raised, to attend graduate school in Canada. I had just ended a seven-year run as a journalist, at a time when the very profession was looking increasingly grim in an authoritarian state. In moving to Canada, I saw a chance of putting down roots somewhere open and democratic. Like Heath, I often find myself—through the mundanity of everyday life as a newcomer—juxtaposing Canada against its neighbour to the south. Both countries—from working with Americans to my schooling in Canada—have left deep imprints on my personality and worldview. 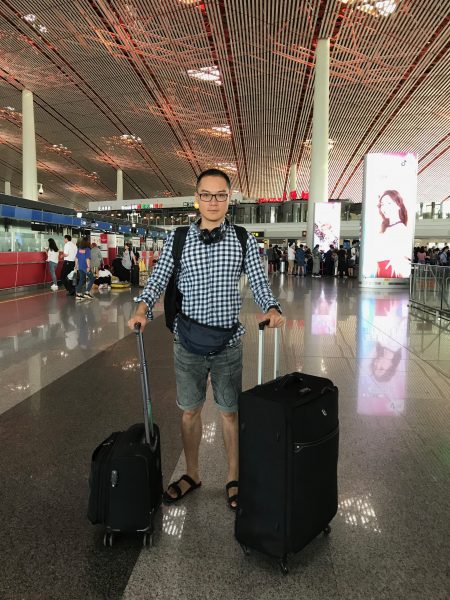 For example, I learned colloquial English from watching the American TV series, Friends. For my first master’s degree in China, my thesis supervisor was an American from Kansas. I cut my teeth in journalism at McClatchy Newspapers, an American news organization, and worked for The New York Times in Beijing for almost three years. If my native Chinese culture taught me hard work and conformity, Americans introduced me to another value system, one that prizes critical thinking, ingenuity, and personal liberty.

For a long time, I thought Canada was just another America, only with nicer people and colder weather. Since moving to Toronto, I’ve been fascinated by the special relationship between the two. Canadians, in my experience, often struggle to articulate what defines their nation, other than multiculturalism, and tend to frame their identity in a we-are-not-them fashion.

“Them”, of course, refers to Canada’s next-door neighbour. “We’re just NOT American,” many Canadians would tell me, before rattling off a laundry list of differences: healthcare system, gun culture, and even national character.

Yet whatever Canadians say about their southern neighbour, the U.S. still looms large in the Canadian psyche.

Consider my campus life. A Canadian classmate often entertained us with his effortless impersonations of U.S. presidents from Donald Trump to Ronald Reagan. One of our professors once boasted that our graduate program had an acceptance rate close to that of top American universities. And despite their disdain for the American way, some Canadians in my cohort followed American politics even more obsessively than they watched hockey. 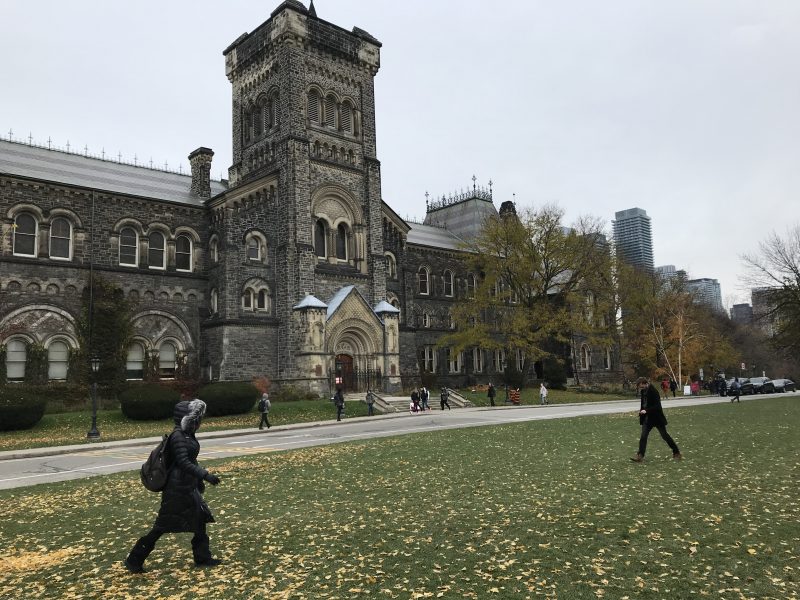 The University of Toronto campus. Photo by the author. Used with permission.

“Canadians measure Canada inevitably and overwhelmingly against the United States,” Jeffrey Simpson, a former columnist for The Globe and Mail, wrote in his 2000 book Star-Spangled Canadians. “This Canadian measuring produces a kaleidoscope of reactions, ranging from envy to anger, from inferiority complex to moral superiority, from doubt to defiance.”

By contrast, Canada barely registers in the American consciousness. When asked to name the Canadian capital, an American interviewee told BuzzFeed News in 2015 that “It’s either Toronto, or Quebec, or there’s something with Victoria in it?” No wonder author Margaret Atwood compares the U.S.-Canada relationship to a “one-way mirror” through which Canadians see the U.S. but Americans barely see Canada. In 1969, Prime Minister Pierre Trudeau famously remarked that being next door to America was like “sleeping with an elephant“ whose “every twitch and grunt” would be felt.

Despite the lopsidedness, some argue that the perceived differences are overblown. Take Charlotte, an American classmate of mine in graduate school who moved to Canada after studying in Scotland for years. “I knew I wouldn’t have to adapt all that much. I got to move closer to home than I had been throughout undergrad, but without actually being back in the U.S.,” she said, “Canadians frame themselves as different to Americans because they don’t want to admit how similar they are.”

Indeed, ask what music and movies people from the U.S. and Canada consume, and the lists would be unsurprisingly similar. Both countries are functioning democracies with large immigrant populations. About 70 per cent of Canada’s foreign trade flows through the world’s longest undefended border to the U.S.

Ed Grabb, a sociology professor at Western University, says any attempt at dissecting differences between the two countries must factor in regional variances. To him, the differences can be best understood by dividing the U.S. and Canada into four distinctive subgroups: the conservative U.S. South, the politically and culturally left-liberal Quebec, English Canada, and the U.S. North. “English Canada and the U.S. North are very similar in their attitudes and behaviours,” he told UBC News in 2011.

Still, the “we are non-American” camp in Canada is just as staunch in their belief, driven by a sense of patriotism and Canadian pride. North America, they say, is not a monolithic concept. And even between the closest of neighbours, nuanced differences abound, from politics to etiquette and mannerisms.

A popular 2000 Canadian beer commercial featuring “Joe”, a character in a typical lumberjack-type plaid shirt, was full of jabs at the U.S.

“I have a Prime Minister, not a President. I speak English and French, not American,” Joe delivered his rousing monologue behind a big screen, his voice growing louder as the speech marched on. “I believe in peacekeeping, not policing, diversity, not assimilation … and it’s pronounced “Zed,” not “Zee!”… Canada is the second-largest landmass, the First Nation of Hockey, and the best part of North America! My name is Joe, and I. AM. CANADIAN!”

The chasm is reflected in temperament, too. A stereotypical American is brash, arrogant, and opinionated. Canadians, on the other hand, are thought to be deferential, nice, and risk-averse. The differences—at least according to popular narrative—have been centuries in the making.

In envisioning a new republic, America’s founding fathers wrote “life, liberty and the pursuit of happiness” into the Declaration of Independence in 1776. Following the American Revolution—a triumph over the British colonizers—the mantra sowed the seed for unbridled individualism and a deep skepticism of government overreach.

Enter the recent government response to the COVID-19 crisis. While the U.S. at times let bitter partisanship undercut its efforts to muster a strong government response, Canadian politicians of different stripes banded together in a largely collective move to tackle an unprecedented crisis. On a per capita basis, the COVID-19 mortality rate in the U.S. is twice that of Canada’s.

Had I attended graduate school in the U.S., what would my life look like now? Would I be able to rebuild my life in Trump’s America where foreign workers and international students alike have been targeted by a ruthless immigration clampdown?

Unlike the U.S., Canada hasn’t turned its back on immigrants, many of whom arrive in the country nursing different dreams and ambitions. They help build the economy and add to the strengths of the society. According to the latest available official data published in 2011, among the immigrants residing in the host country six to ten years, the average citizenship rate in Canada was 71 per cent, compared to 24 per cent in the U.S. 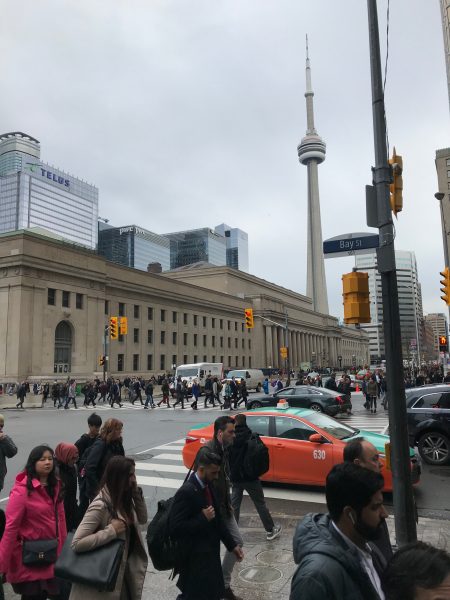 Morning commuters in Toronto, one of the most culturally diverse cities in the world. Photo by the author. Used with permission.

Of course, Canada is not perfect. Many problems plaguing the U.S., including racism and homelessness, also afflict Canada. Still, the country feels different—safer and more accepting. I feel at ease speaking Chinese on Toronto’s Yonge Street, in a multicultural city where one’s skin colour and accent rarely bring frowns. And while people expect me to be respectful, no one forces me to “act Canadian.”

As I set out to plan my life in Canada during an unprecedented pandemic, I’m also watching anxiously from afar the escalating tensions between and my birth country and the U.S., as Beijing and Washington jockey for greater influence globally. Now the COVID-19 pandemic is accelerating a nasty race between the two powers, with each side touting their self-proclaimed exceptionalism in governance. Sadly, aggression is emerging as the new currency in global geopolitics. It has bruised Canada, following its arrest of a Chinese tech company executive in Vancouver in 2018 on behalf of the U.S. In the aftermath, Ottawa is confronted with both Beijing’s ire and indifference from Washington.

For many immigrants living in the U.S., the aggression can be just as excruciating. A Chinese friend, who is about to start his PhD at an Ivy League university, packed all his belongings in preparation for the worst when the Trump administration recently threatened, unsuccessfully, to revoke visas for international students whose courses were entirely online due to the pandemic.

Last week, he reached out to me with an unusual request. “Many of my Chinese classmates in D.C. want to immigrate to Canada. Do you have time to chat?” he asked on Facebook messenger. Over a one-hour Zoom chat, he, along with his peers, some of whom work for international organizations like the IMF and the World Bank, showered me with questions about life in Canada—as well as its immigration policy. To them, neither the U.S. nor China feels like home.

Now, two years into my new life in Canada, I still think back to these parting words from a former American colleague: “Congratulations, you’re achieving both the Chinese Dream and the American Dream—moving to Canada.”

2020-08-15
Previous Post: Is the Future of Wheat Farming Inside and Up?
Next Post: Natives’ or ‘outsiders’? A mob attack in Meghalaya throws questions of belonging into sharp relief · Global Voices