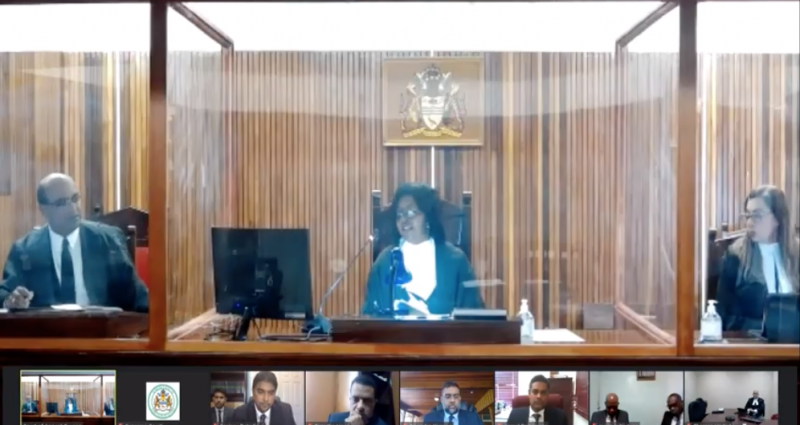 President Granger has said he will accept GECOM’s declaration

The three Guyana Appeals Court judges hand down their ruling in the in Misenga Jones elections case, on July 30, 2020. Screenshot taken from the Stabroek News livestream of the judgement.

On July 30, Guyana’s Court of Appeal handed down its judgement in the action brought by Misenga Jones, a supporter of the governing coalition A Partnership for National Unity/Alliance for Change (APNU+AFC), who petitioned the court to have the numbers from the election recount discarded.

In a unanimous decision that was livestreamed, the country’s appeals court determined that the recount votes should be used to determine and declare the result of the general elections, which took place nearly five months ago on March 2.

Jones had argued that the figures put forward by Clairmont Mingo, the electoral officer in charge of Region 4, the district around which the election results controversy swirls, should be used for the preparation of the Chief Election Officer’s report.

In Guyana, election results must be verified by Statements of Poll; the initial results declared by Mingo had been read from a spreadsheet.

The three presiding judges also ruled that Chief Election Officer Keith Lowenfield must submit his official report based on the results of the recount.

Lowenfield had initially said that he believed a number of ballot boxes to be “infected” [votes that cannot be confirmed as legitimate]; despite clear legislation to the contrary, he maintained that he was not going to include them in the count. Now, it seems, he will not have a choice.

The judgement falls in line with the Caribbean Court of Justice’s (CCJ) ruling, which stated:

Unless and until an election court decides otherwise, the votes already counted by the recount process as valid votes are incapable of being declared invalid by any person or authority.

Both these rulings fly in the face of the position the government has taken, which it reiterated in a July 26 statement, that “fraudulent votes must be excluded” from the count. Guyana’s laws only allow for the validity of votes to be challenged through an election petition after the overall election result has been declared and a government is in place. Challenging the legitimacy of votes cannot be done during the process itself.

The APNU+AFC entered into the recount process with the expectation that the misgivings regarding the Mingo declarations would be investigated. Unlike 1997 [when Janet Jagan took the presidential oath under the People’s Progressive Party (PPP)] President Granger did not have himself sworn in secretly, but suggested a recount as we have nothing to hide. What came out of the process was indications of massive fraud and ‘rigging’ perpetrated and to the benefit of the PPP.

Attorneys representing the opposition PPP consistently maintained that any challenge of the recount can only be approached through an election petition, and asked the appeals court to allow the Guyana Elections Commission (GECOM) to finalise and declare the results of the election.

Now that the judgement has paved the way for this to happen, it remains to be seen whether the APNU+AFC will graciously step down.

Once the decision was announced, President David Granger said he would accept GECOM’s declaration without condition, even if it includes votes that his party deems invalid.

However, in a Facebook video posted soon after the ruling was delivered, APNU+AFC’s campaign manager, Joseph Harmon, registered his dissatisfaction with “how the [appeals] court was constituted”, and suggested the ruling was “not sound in law”. He also reiterated the party’s stance that “fraudulent votes cannot be the basis for a final declaration to be made”.

The two differing positions have heightened public speculation that there is a widening rift within the coalition, which the party seems ill equipped to survive.

In response to the APNU+AFC’s claims of fraudulent ballots, the Caribbean Community (CARICOM) Observer Team report concluded that the irregularities identified were not “sufficient grounds to invalidate the tabulation of the votes at the recount and therefore […] DO NOT constitute sufficient grounds to challenge the integrity of the recount process.”

2020-07-31
Previous Post: Four reasons the UK government’s obesity strategy may not work for everyone
Next Post: Coronavirus vaccine: lessons from the 19th-century smallpox anti-vaxxer movement