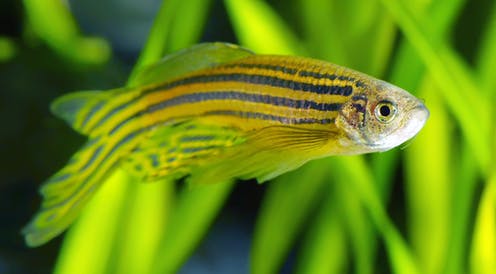 Zebrafish are one of the most well studied animals on the planet. But how they came by their beautiful black and gold stripes is more of a mystery. Our new research used mathematical modelling – and detailed observations of mutant zebrafish patterns – to get to the bottom of one of nature’s oldest secrets.

Estimates suggest that zebrafish are used in over 600 labs around the world to study diseases that range from muscular dystrophy to cancer. It may seem hard to imagine that a tiny tropical fish can tell us anything useful about distinctive human physiology but they are more similar to us than they appear at first glance. They have spines, hearts, livers, bones, eyes and kidneys.

Of equal importance is the opportunity that this hardy fish presents to investigate and understand the fundamental, and beautiful, biological processes that generate the spectacular pattern diversity seen in nature. These patterns are formed by the arrangement of pigments, usually packaged in specialised cells.

From a distance zebrafish stripes look like long thin blocks of black or gold pigment. But on closer inspection it can be seen that these stripes are made up of thousands of small and distinct dots of colour. Each dot is a single pigment cell. The three cell types that produce the pattern are black melanophores, yellow xanthophores and silver and blue iridophores. Our research focused on understanding how enough of these cells interacting in the right way can result in the alternating striped patterns on a zebrafish.

The mathematical theory that has predominated explanations of how zebrafish’s stripes emerged is Turing patterning. The mechanism is named after the visionary war hero, computer pioneer and mathematician Alan Turing who first suggested it. In Turing patterns two different types of “agent” (melanophores and xanthophores in most zebrafish models) move around randomly and interact with each other in a special way, giving rise to a range of possible patterns. Although the patterns look convincing, scientists have not been able to prove this theory of animal coat patterning.

But our study has demonstrated that the pattern formation mechanism is more complicated than a simple Turing model might suggest. As well as melanophores and xanthophores, we know iridophores also play an important role. These reflective cells give zebrafish their characteristic silvery appearance. Experiments have shown that without iridophores (or either of the other two cell types) the zebrafish’s characteristic striped pattern doesn’t form properly.

We wanted to find out which biological phenomena are crucial for pattern formation and which are just incidental. These sorts of questions can be answered with mathematical modelling.

We built an “agent-based” model (a computer code in which each cell is represented as an individual that can move and interact with others) which includes as much of the known biology of zebrafish patterning as possible. Once we had adapted the model to show it could reproduce the patterns seen in normal zebrafish we turned to the patterns formed by mutant zebrafish (fish with a genetic defect which changes their patterning) and tweaked the model rules to make sure it could replicate those too.

Other mutant zebrafish, whose patterns were not used to build the model in the first place, acted as independent tests of the model’s pattern-replicating ability. Being able to mimic these other patterns gave us confidence in the model rules we had inferred.

As an example, the “choker” mutant has a defect which means silvery iridophores do not migrate to the skin in the normal manner. When we implemented this aberrant delivery of iridohphores in the model (but with essentially all the same rules) it neatly recreated the striking labyrinthine pattern seen in these fish.

And then comes the really exciting part. The beauty of mathematical modelling is that once you’re confident your model captures the biology you can start to play around with it and ask biological questions that are difficult to answer through experiments alone.

For example, we were able to show that part of the reason zebrafish stripes are horizontal (as opposed to its mammalian namesake’s vertical stripes) is due to the way in which the body grows as the pattern forms. Faster growth along the head-tail axis (rather than the back-belly axis) of the fish tends to elongate groups of pigment cells into horizontal stripes rather than vertical bars.

Since pattern formation is an important general feature of organ development, there may be medical relevance to our research. A better understanding of pigment pattern formation might give us insights into the diseases caused by defects in cell arrangements.

With a working mathematical model there is no end to the questions we can ask about pigment pattern formation in zebrafish and other species. In particular, our next aim is to investigate the evolutionary origins of stripe formation in the broad family of Danio fish, of which the zebrafish (or Danio rerio) is a member. And that will help us gain an even deeper insight into how the zebrafish really got its stripes.

Christian Yates does not work for, consult, own shares in or receive funding from any company or organisation that would benefit from this article, and has disclosed no relevant affiliations beyond their academic appointment.