Curious Kids: How much does a cloud weigh? 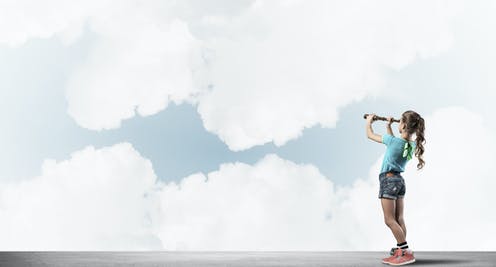 Clouds seem to be floating in the air, which might make you think that they don’t weigh very much at all – but you would be wrong.

We can use our knowledge of different types of cloud and what clouds are made of, as well as some maths, to work out how much they weigh.

The next question is what type of cloud we are weighing. There are lots of different types of cloud, all with their own names. The fluffy clouds that drift across the sky in summer are called cumulus clouds.

To start with, we will think about that fluffy summer cloud, the cumulus cloud. A cumulus has approximately a quarter of a gram of water for every cubic metre of cloud. A quarter of a gram of water, all together, would make a drop of about the size of a marble. But really in our cubic metre there would be around 1 million drops, so they are very tiny, too small to see.

The next thing to consider is the size of the cloud. You can see how big cumulus clouds really are if you look at their shadow on the ground from a high view point on a sunny summer day.

Summer cumulus clouds vary in size, but a typical one would be about one kilometre across and about the same tall. This means we can consider it to be a cube, with each side measuring 1km across. That means our cloud is 1,000 x 1,000 x 1,000 cubic metres in size – and this makes 1 billion cubic metres.

Our cloud had only a quarter of a gram of water per cubic metre, but that’s going to work out as rather a lot now there’s a billion of them. The weight of the water in the cumulus cloud is 250,000,000 grams – 250 tonnes. This is about the same as two adult blue whales.

What about the other cloud types? A thunderstorm cloud is bigger, measuring about 10 km tall and the same across. They also contain much more water, which is why they rain so hard: about two grams per cubic metre. Do the maths again and we have 2 million tonnes of water.

Then there’s that grey sky cloud layer. This has about the same amount of water per cubic metre as the cumulus cloud, but they cover the whole sky. They are often very shallow – perhaps 200 metres thick – but they could easily be 500 km across. This makes them 50,000 times bigger than the cumulus, so that’s somewhere around 10 million tonnes of water.

Finally, we need to add the weight of the water in the cloud to the weight of the air. Let us return to our summer cumulus cloud. Where these low clouds are, the air weighs around one kilogram for every cubic metre – 4,000 times more than the water did.

Given the volume of our cumulus cloud, that’s 1 billion kg, or one million tonnes. That is why the cloud can stay up in the air – the tiny water drops are held up by all that air.

If we do the same maths for a thunderstorm cloud, we get one billion tonnes of air. For the grey sky cloud layer, it’s 50 billion tonnes.

If we add together the weight of the water and the air in a cumulus cloud, then, it weighs a total of 1,000,250 tonnes. You could say, though, that maybe the air doesn’t count as part of the cloud’s weight, as it would have been there anyway. Either way, clouds are heavier than you might think.

2020-07-24
Previous Post: Does your homemade mask work?
Next Post: Why urban density is good for health – even during a pandemic