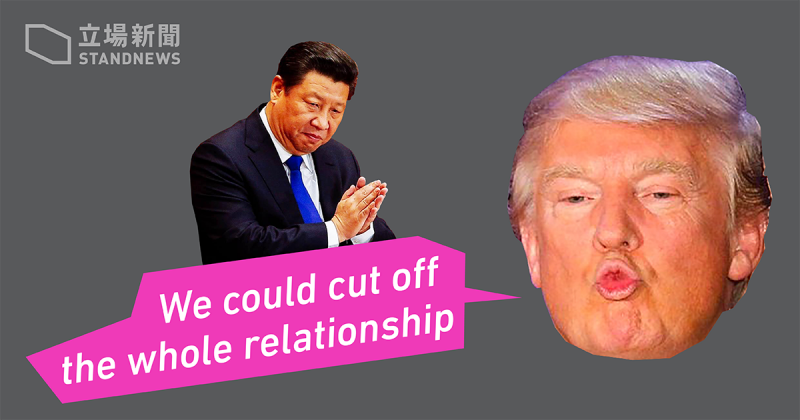 Xi Jinping and Donald Trump both participate in the current Sino-US diplomatic battle. Photo from StandNews, used with permission.

To mark its central role in international relations, China continues to highlight the importance of its diplomacy. The latest episode took place in July 2020 with the inauguration of the Xi Jinping Thought on Diplomacy Research Center. Yet, as some Chinese netizens point out, China’s diplomacy has made a number of powerful enemies as a result of its assertive, and often aggressive stand that is thus dubbed by Xi’s critics as “wolf warrior” diplomacy.

Established by the Chinese Ministry of Foreign Affairs, the center aims at developing and studying a form of diplomacy based on Xi Jinping’s thinking and statements. Wang Yi, the Minister of Foreign Affairs said in his approximately 5,000-word inauguration speech on 20 July 2020:

Today’s China is unprecedentedly close to achieving its dream of a great revival of the Chinese nation, and approaching the center of the world’s stage… Amid a rough drift in the international world, Chief Secretary Xi Jinping, with his great strategist vision, has grasped the law of the development of human society and made a comprehensive judgement of the world’s future direction, and the historical position of our country. He has provided a set combining theory and practice, that manifests its Chinese character and the spirit of our times, to lead the human world into a progressive stage…

Wang also mentioned China’s Belt and Road Initiative and its success in creating opportunities in the current economic chaos caused by the COVID-19 pandemic, as one of Xi’s accomplishments.

But Wang Yi’s speech has little connection to what many countries experience in their relationship with China. Indeed, many describe Beijing’s international strategy as a form of “wolf warrior” diplomacy.  The term comes from the 2015 popular Chinese movie “Wolf Warrior” — a patriotic action movie that is remembered for one of its famous punchlines: “Whoever offends China will be eliminated, no matter how far away” (犯我中華者 雖遠必誅).

The assertiveness of the “wolf warrior” style has been employed by a number of Chinese diplomats. For example, in March, the Chinese foreign ministry spokesperson Zhao Lijian spread a conspiracy theory on Twitter according to which the US Army could have brought COVID-19 to China. This came as a response to US President Donald Trump’s earlier use of the term “China virus” to describe the novel coronavirus.

In February, China’s ambassador to Sweden, Gui Congyou said explicitly that “we treat our friends with fine wine, but for our enemies, we have shotguns” when commenting on China’s abduction and 10-year jail sentencing of publisher Gui Minhai, who was born in China but is a Swedish citizen.

Some also describe China’s aggressive diplomacy as “hostage diplomacy”. The detention and subsequent charge with espionage of Chinese Australian writer Yang Hengjun in January 2019 was viewed as a consequence of the counter foreign interference laws enacted in November 2018 in China.

A more obvious example of the diplomatic hostage was the detention in December 2018 and later the indictment of two Canadian citizens, Michael Kovrig and Michael Spavor, on espionage charges. The move is widely viewed as a retaliation on the detention of Huawei CFO Meng Wanzhou in Canada on request of the US authorities.

As the recent enactment of national security law in Hong Kong has undermined the “One Country Two Systems” commitment under the Sino-British Joint Declaration and extended extra-territorial jurisdiction to the arrest of foreign citizens, a number of countries including Canada, Australia, the United States and Britain have canceled extradition arrangement with Hong Kong.

In addition to the conflicts with Western countries, China has clashed with its immediate neighbors in recent years.

Since 2013, Beijing has started the construction of an artificial island in the South China Sea in the Spratly Islands and the Paracel Islands regions. This move has intensified territorial disputes with Vietnam, the Philippines, Brunei and Malaysia.

In the East China Sea, China and Japan both claim rights over a set of desert islands called Diaoyu in Chinese and Senkaku in Japanese, where both engage in regular naval activity. In the Taiwan strait, China has adopted “a grey-zone conflict tactic” by holding its military exercise in the vicinity of Taiwan’s air space and waters.

All those moves could rapidly escalate into violent clashes as demonstrated very recently in the fight between Chinese and Indian soldiers in the disputed territory of Ladakh on June 15. The incident caused the death of 20 Indian soldiers, and is the first deadly clash between the two countries in at least 45 years.

None of the above challenges to China’s diplomacy were mentioned in Wang Yi’s speech. Chinese netizens, on the other hand, have composed their own list of Xi’s diplomatic achievements on Twitter to reflect the reality China is facing. EvanLi2020 wrote:

One Belt One Road led to an unfathomable debt.
Made in China 2025 helped the U.S to arrest those who had been recruited by China under an innovation program called the 1000 Talents Plan.
Wuhan pneumonia ignited the whole world.
Hong Kong’s national security made the whole world insecure.
The China-India border turned into a stone clash.
Hurray to Xi Jinping diplomacy research center!
So many experts happily get together. Do they even know what shame means?

The Xi Jinping’s Diplomacy Thought research center was inaugurated. Xi’s diplomacy is nothing more than Red Guards-style ‘wolf warrior’ diplomacy. Its four elements are cursing, lying, acting in a shrewd manner, and bluffing. WTF is this so-called research? Just listen to the orders. The function of the Foreign Affairs Ministry has been dissolved and it has turned into a branch of the propaganda department doing cheerleading work. This is the end of the good old days in diplomacy. The Foreign Affairs Ministry has turned into the Ministry of Making Foreign Enemies: