High-intensity workouts may put regular gym goers at risk of rhabdomyolysis, a rare but dangerous condition 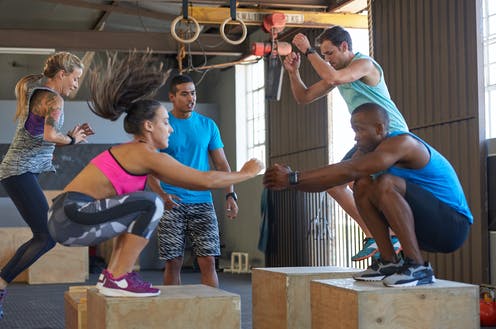 If you’re a gym regular, you’re probably familiar with the feeling of achey or sore muscles a day or two after overdoing it slightly during your workout. But while this is common – and normal – pushing your body to do more than it’s capable of could result in a dangerous condition called rhabdomyolysis.

Known as “rhabdo” for short, it’s a potentially life-threatening condition caused by damage to muscle cells. Rhabdo was originally known as “crush syndrome” and was first identified in victims of the London Blitz in the 1940s. Victims survived their crush injuries only to die several days later from kidney failure. Today, around 47% of rhabdomyolysis cases are in people who engage in extreme exercise that’s unfamiliar to them. This is known as “exertional rhabdomyolysis”.

Rhabdomyolysis happens when muscle damage causes an excessive increase in internal calcium, causing muscle cells to die. As the muscle cells die, they release proteins into the blood, including myoglobin (the protein that makes our muscles absorb oxygen) and creatine kinase (a protein involved in energy production). Myoglobin is usually filtered by the kidneys but, as it’s a large protein, excessive amounts can damage the kidneys, block urine production and cause life-threatening complications such as kidney failure or compartment syndrome (where swelling prevents normal blood supply to a tissue).

The pain or tenderness we commonly experience a day or two after a big exercise session is known as delayed onset muscle soreness, or “DOMS”. This is actually a very mild form of rhabdo. Small areas of damage in the muscle can cause pain, usually concentrated at the part of the muscle that moves when it contracts.

But the condition becomes dangerous – and may require treatment – when the pain is severe and muscle proteins are released in the blood. Symptoms may include extreme pain even at rest (whereas DOMS pain is only when you move), muscle swelling, and brown urine. Rhabdo can be diagnosed through measuring myoglobin in urine or creatine kinase (a marker of muscle damage) in the blood serum.

Who does it happen to?

Exertional rhabdomyolysis is more common in males and around 75% of cases are in people under 40 – although this may simply reflect those that take part in high intensity exercise training. Rhabdomyolysis develops in around 30% of people on the same day of exercise, and 55% within 48 hours of exercise. However, a small minority develop the condition more than one or two weeks after exercise.

It’s unusual for elite athletes to develop rhabdomyolysis. This is because their muscles are more refined, making it more difficult to damage them during workouts. Similarly, it’s unusual for untrained people to develop rhabdomyolysis – typically, because they can’t push their bodies hard enough to severely damage muscle or deplete muscle cells of energy.

Those most at risk are male, non-elite, regular exercisers with a body mass index of over 30 (who may be overweight or very muscular). The chance of developing rhabdomyolysis increases when training multiple muscle groups, in extreme temperatures, or when not hydrating properly. The risk is tripled with certain medicines, including statins or antipsychotic medication.

How common is it?

Exertional rhabdomyolysis is relatively rare with around 40 cases per 100,000 people a year. However, its prevalence has increased significantly over the last 15 years.

Rhabdo can happen as a result of endurance exercise, such as marathon running. However, most cases result from resistance exercise where there is greater likelihood of damaging muscle fibres – particularly through eccentric (muscle lengthening) contractions, such as lowering the weight during a biceps curl or the downward motion of a squat. Increased prevalence might also come from more awareness and diagnosis by medical practitioners following high-profile cases.

Exertional rhabdomyolysis occurs in response to unaccustomed, usually extreme, physical exertion – either in the gym, or even from manual labour – that causes muscle cells to die. Risk can be reduced by hydrating properly, increasing workout intensity and duration gradually (known as progressive overload), and ultimately, listening to your body.

Will cases increase as gyms reopen?

Most regular gym-goers haven’t had access to the equipment available at commercial gyms for the last four months or so. People who have kept up with exercising during lockdown have likely modified their normal routine given the circumstances. This could leave them more vulnerable to exertional rhabdomyolysis when returning to normal gym training. Indeed, we know that prolonged confinement results in loss of strength even when continuing to exercise regularly, which could also increase risk.

If exercisers have these symptoms, they should seek medical attention immediately.

When returning to the gym or your local CrossFit box, don’t push too hard in those first few sessions back. Your body might find workouts difficult that were once routine.

Give your body time to familiarise itself with kit and exercises that were not part of your routine in lockdown, and increase training volume gradually. Plan to get back your previous fitness in weeks not days and remember that despite your best efforts, your baseline fitness may not be what it was before lockdown.

Christopher Gaffney does not work for, consult, own shares in or receive funding from any company or organisation that would benefit from this article, and has disclosed no relevant affiliations beyond their academic appointment.

2020-07-17
Previous Post: New dinosaur discovery in Switzerland fills a gap in evolutionary history of sauropods
Next Post: Shamima Begum: what the legal ruling about her return to the UK actually means