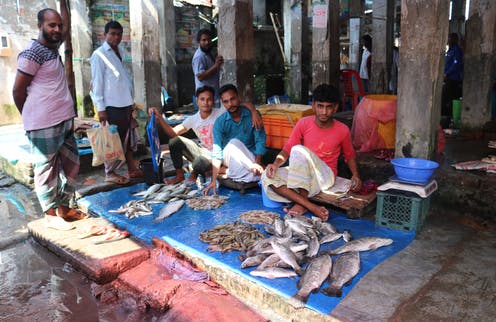 The COVID-19 pandemic has emerged as far more than a health crisis for the world’s poor and marginalised, exposing faultlines in food systems around the world. The UN’s World Food Programme warned in early July that 270 million people will face food insecurity before the end of 2020.

Our ongoing research in Mongla, a small coastal city of 106,000 people in southwestern Bangladesh, is exposing just how vulnerable many people are to food insecurity. If a family spent over half their monthly income on food before the pandemic and their income drops to zero, it’s highly likely they won’t be able to afford enough to eat. This happened in cities across Bangladesh during the coronavirus lockdown, which caused a steep drop in income for most people living in informal settlements.

Bangladesh went into lockdown – officially a “general holiday with restrictions on movement” – on March 26. The national lockdown was relaxed on June 1, although there are still local restrictions in some parts of the country based on the evolving number of infections. As of July 15, Bangladesh had 193,590 cases of COVID-19 and 2,457 people had died from the virus.


In our research collaboration with the International Centre for Climate Change and Development we’ve been conducting a rapid assessment to understand how low- and middle-income residents in small cities have been coping. In 15 telephone interviews between May and July 2020, our team asked residents of the city of Mongla about their experiences of the lockdown and the effect this has had on what they’ve been eating. This study builds on wider research on life in small cities based on 200 surveys, 40 interviews and storytelling workshops conducted between September 2019 and March 2020.

Mongla is strategically important. Home to Bangladesh’s second largest seaport and an export processing zone employing thousands, it is located next to the Sundarbans, the largest mangrove forest in the world. Unfortunately, Mongla is also vulnerable to cyclones and storm surges and struggles with high levels of water and soil salinity. The city was also hit by cyclone Amphan in the middle of the lockdown.

Read more:
Bangladesh has saved thousands of lives from a devastating cyclone – here’s how


Many residents in Mongla experienced near or complete loss of income during the lockdown which restricted almost all economic activities. People were only allowed to leave their homes to buy food during a four-hour period each day. Day labourers, street vendors, small businesses all saw their livelihoods decimated. One rickshaw driver who we spoke to in late May told us:

This lockdown is making us suffer for several months. I have never seen anything like this. Before, if there was a disaster, we survived with our savings, but this time savings are not helping much.

Our household surveys conducted in September 2019 indicated that 84% of the low-income households in Mongla didn’t have any savings and two-thirds of them spent more than 50% of their income on food. To make things worse, prices of essentials such as rice, lentils and spices increased in the city during the lockdown as very little is grown in the surrounding area due to high salinity.

To limit the effects of the emerging crisis, the local government, non-governmental organisations and security forces in Mongla provided food relief parcels containing rice, potato, lentils, cooking oil, onions and soap to vulnerable groups during the lockdown. Although this support was useful, our interviewees told us it didn’t reach everyone in need.

This meant that poverty caused by the economic shutdown meant poorer families had to eat less or skip meals. They also relied on cheap calories and cut back on portions of nutritious food – which were already a rarity before lockdown. A young mother from the city explained:

We have been eating rice with lentils or potatoes. We have not been eating eggs, meat and fish that much because we heard rumours that the virus spreads through animal food items. We did not eat meat – not only because of the rumours – but also because it’s more expensive.

While there is no evidence that people can contract the virus through meat or other animal products, such rumours have been damaging for producers, especially in Bangladesh’s poultry sector.

The issue in Mongla wasn’t that food was hard to find, but that people couldn’t afford to buy it. Residents reported buying food on credit from neighbourhood grocery stores or taking loans from their neighbours, organisations and from loan sharks which will take them months to repay.

All those we spoke to who didn’t have a guaranteed income told us their monthly food-related expenses were lower during the lockdown than before the pandemic. But due to their declining income, the percentage of their monthly income spent on food has risen sharply, in some cases hitting nearly 100%.

While middle-income families with guaranteed income didn’t report any major changes in what they ate, our initial interviews are highlighting hidden pockets of urban food insecurity among those without a guaranteed salary. For example, those who work in small businesses that were closed during the lockdown and have limited savings.

Since the nationwide lockdown was relaxed, the local economy in Mongla is gradually gaining momentum – but returning to full economic capacity will certainly take time. Even before the pandemic, many residents of cities such as Mongla didn’t have a safety net and struggled to provide enough nutritious food for their families. COVID-19 has exposed even more starkly the precariousness of life in these cities.

Mohammad Feisal Rahman's work for this article was funded by the GCRF Living Deltas Hub NE/S008926/1. This article was also based on data collected from a 2019 research project funded by the Centre for Sustainable, Healthy and Learning Cities and Neighbourhoods (SHLC)’s Capacity Development Acceleration Fund. SHLC is funded via UK Research and Innovation, and administered through the Economic and Social Research Council, as part of the UK Government’s Global Challenges Research Fund.

Hanna A Ruszczyk's work on this article is also supported by the GCRF Living Deltas Hub and SHLC.

2020-07-16
Previous Post: Coronavirus: why are some people experiencing long-term fatigue?
Next Post: In Georgia, cinema is the latest flashpoint in the struggle for LGBTQ+ rights · Global Voices