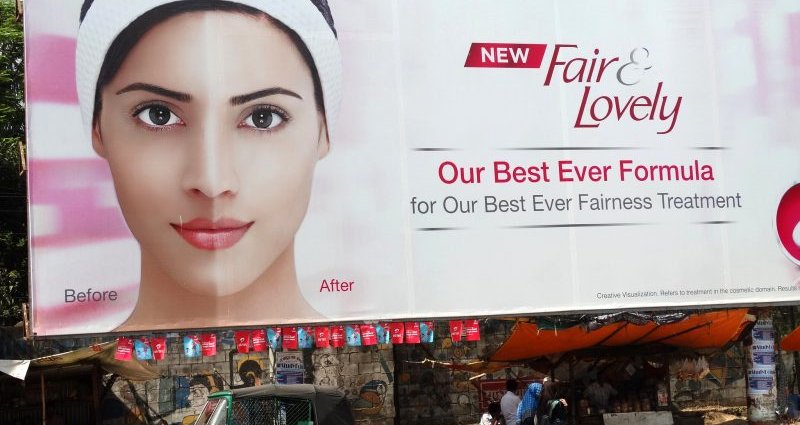 On 25 June, global cosmetic conglomerate Unilever announced a decision to re-brand its leading skin-lightening product ‘Fair & Lovely’ to ‘Glow & Lovely’. The major decision comes in the wake of the recent Black Lives Matter protests that erupted around the world following the police killing of George Floyd in the US.

In South Asia, where discrimination based on skin color permeates the beauty industry, ‘Fair & Lovely’ has been popular for nearly five decades. As celebrities raised their voice against racism using hashtags like #BlackLivesMatter and #JusticeForGeorgeFloyd, others were quick to point out the hypocrisy of those that have long endorsed skin-lightening products.

While Unilever claims that the brand change aims to “celebrate all skin tones”, anti-colourist activists and social media users are questioning whether the brand’s name change tackles the real issue.

Although the “Black Lives Matter” movement exists in a specific context, its calls for racial justice have resonated with justice movements around the world. In South Asian countries — like India and Pakistan — skin color is seen as an indirect marker of social class and status. This issue has been prevalent since colonial times, with many women facing problems in getting marriage proposals or landing better work opportunities due to discrimination based on their complexion.

The product, Fair and Lovely, has been used by many women across South Asia since the late ’70s. Its marketing techniques, with before and after images of dark to light coloured skin, works indirectly to equate fairer or lighter skin colours with beauty.

Indian Journalist Barkha Dutt compares skin lightening creams to another marker for racism in South Asia. She takes a jibe at Unilever’s ‘Fair and Lovely’ commenting on how the brand has normalized racism in India and created wrong notions of beauty for millions of Indian boys and girls for five decades.

If Skin Lightening creams are going to be racism by another name that is neither fair nor lovely.

This war of complexion has created a huge problem for our women. Even our religion has said that no one is superior to another on the basis of colour yet these creams, advertisements, and mindset have effected women. South Asians are coloured people and we need to accept them as they are instead of opting for these products. It’s good that the word ‘Fair’ will be dropped but people too have to stop worrying and harassing people on the complexion.

A number of people in both India and Pakistan have been working to change the skin lightening industry, asking manufacturers to remove whitening creams from the market. Indian actress Nandita Das, who has been running the Dark is Beautiful campaign since 1994, celebrated Unilever’s decision as an indication that mindset’s are slowing starting to change.

Wow! Words impact notions & they, the mindset. I want to believe that the campaign Dark is Beautiful & India’s Got Colour played a tiny role. Many of you have too. Long way to go before things are truly ‘fair’, but we are on our way! #IndiasGotColour #AllShadesAreLovely https://t.co/lra7mlwqwq

While in Pakistan, anti-colourism and diversity advocate Fatima Lodhi has been running the Dark is Divine campaign for the past seven years. Dark is Divine issued a statement on about Unilever’s decision pushing for more messaging aimed at “re-humanizing” dark skin tones:

Rebranding of products to recognize multiple shades, shapes, and sizes of beauty should be followed by behavior change programs to re-humanize the dark skin. Promoting lighter skin tone is not only colorist but a racist act as well and further, giving pedestal to the fairer skin tones while treating dark skin as a disease is also a clear attempt at enhancing most people’s feelings of insufficiency.

So… @unilever is still going to sell skin lightening cream in South Asia and will just call it “Lovely” from now on? https://t.co/6R5LrhHIn9

‘Fair & lovely’ to be rebranded dropping the word ‘fair’.
While the attempt is fair (no pun intended), is it really enough? Using the words glow and brighten doesn’t really change what the product was built for.
”…a rose by any other name……”

So Fair and Lovely will now be called Glow and Lovely? C’mon Hindustan Lever. For years you’ve been profiting by destroying our nation’s young girl’s self worth by making rude comments about dark skin.

Now prove your ‘intentions’ by having a dark skinned girl on your packaging.

Is a change coming?

Along with building toxic psychological pressure, whitening creams contain the ingredient, mercury, which is said to be carcinogenic in nature. Pakistan’s Minister of State for Climate Change, Zartaj Gul Wazir, made an official statement in July 2019 regarding the government’s promise to crackdown on whitening creams that contain more than 1 percent mercury — citing the ministry’s finding that 56 of 59 samples of fairness products contained more than 1 percent mercury. On July 4, 2020, in a Dark is Divine Facebook message Zartaj Gul Wazir reiterated her commitment to cracking down on mecury in whitening creams once the Minamata Convention on Mercury is ratified.

Anum Chandani, Hira Hashmi, and Marvi Ahmed from Pakistan started the petition to ban Fair and Lovely and are also running an Instagram account to create awareness among masses.

This is a petition I wish no one had to make because Fair and Lovely is a cream that shouldn’t exist. Nevertheless, @Unilever please stop making it and selling it. https://t.co/6lqH2LPHtD

Another win came when Indian matrimonial website Shaadi.com, known for keeping a skin tone filter, has dropped it from its website after the recent uproar by many users.

While changes are slowing being made, Ipsita Chakravarty notes that there may still be a ways to go:

The packaging of the creams may have changed but not their substance. And while Shaadi.com will no longer ask for your skin tone, you can still search for prospective partners by caste, which is what skin colour stands for in India.

2020-07-13
Previous Post: Butchers’ shops sales boosted by local support under lockdown
Next Post: Beyond name changes and pulling down statues – how to decolonise business schools