National anthems in sport: songs of praise or memorials that are past their use-by date? 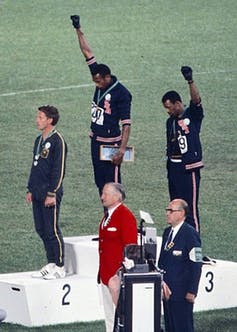 International sport has resumed in the UK with the cricket Test match between England and the West Indies. Before play, in addition to a rendition of Jerusalem (the “official hymn” of England cricket), both teams and officals “took a knee” in support of the Black Lives Matter (BLM) movement. Nationalistic traditions, such as playing anthems at sport matches, have been a key part of society for many years but now may be time for change.

Symbols of colonialism, such as statues, place names and rituals, are attracting unprecedented criticism in postcolonial, liberal-democratic societies. That is especially so when memorialised individuals and institutions are viewed as unworthy – by 2020 standards – of such honour.

The most immediate concern, driven in part by BLM, is racism. One aspect of that is whitewashed commemoration, in the way that civic observances tend to sanitise uncomfortable truths.

Intriguingly, the concept of “the nation” – and anthems invented to represent them are – historically, young. The modern nation state is a product of the 19th and 20th centuries.

So, it is not surprising that many of the ideas and assumptions associated with national identity are rooted in what historian Eric Hobsbawm has deftly labelled “the invention of tradition”. In the context of the British Empire, this process involved both the celebration of conquest and, as is typical of imperialism, the subjugation and control of indigenous cultures.

Given the major role sport played in the establishment of empire for Britain, it is no surprise that the first sporting event to feature a national anthem was a rugby match in 1905 between Wales and New Zealand. Soon after, in the United States, the playing of the national anthem before baseball matches became a feature during the first world war. The Star Spangled Banner, not officially recognised until 1931, carried patriotic weight as the song was already used to honour the nation’s military.

Exceptionally, national anthems at sport events have involved athlete activism. More than 50 years ago, the Black Power salute protest of Tommie Smith and John Carlos (supported by Australia’s Peter Norman) during the US anthem at the 1968 Mexico Olympic Games received worldwide attention. Smith and Carlos were vilified for highlighting the racism and discrimination present both inside and outside of American sport.

In 2016, Colin Kaepernick refused to stand during the playing of the national anthem ahead of NFL matches. He stated: “I am not going to stand up to show pride in a flag for a country that oppresses black people and people of colour.”

He and fellow anthem protesters were labelled by loyalist critics as anti-American. They received death threats, and were described as “sons of bitches” by the US president, Donald Trump (whose comments often pander to white nationalist sentiments).

But in the wake of BLM, sport has become a site for widespread anti-racism activism. Athletes are increasingly using their profiles to draw attention to social movements that challenge inequalities and injustices – especially those underpinned by structural racism.

In professional sports leagues from Britain to Australia, matches have been preceded by players taking a knee. Players and officials are keen to show their support of BLM and, belatedly, Kaepernick.

Even the typically conservative NFL is now allowing athletes to advocate openly in respect of BLM. The league has also indicated a plan to play the song Lift Every Voice and Sing, widely known as the Black national anthem, during the first week of the season.

Moreover, in another sign of changing times, the Washington Redskins has announced it will review their name – which, after all, speaks to conquest and genocide of Indigenous Americans. The power of BLM to invoke change cannot be underestimated. As recently as 2013, the Redskins’ owner said that the team would never change its name, conveniently ignoring repeated appeals and protests by Native Americans.

Swing low and other stories

In Britain, BLM has catalysed debate about the appropriateness or otherwise of fans singing the “unofficial anthem” for English rugby, Swing Low, Sweet Chariot. This song has been sung with gusto at [rugby matches since the 1960s].

Precisely why it was embraced by fans is unclear. But some black players now reveal they are uncomfortable with their sport revelling in what was, originally, a black Christian hymn that combined “spiritual belief with the hardships of daily life as a slave in antebellum America”.

Whether or not it knew of the song’s history, the Rugby Football Union has commercialised and profited from its appropriation of an African-American slave hymn.

Read more:
Our national anthem is non-inclusive: Indigenous Australians shouldn’t have to sing it


Our recently published research found that protests by high-profile Indigenous athletes can move debates on societal inequalities back into the spotlight.

Formula One World champion Lewis Hamilton has championed BLM activism in his sport. He remarked recently that racism is still not understood by many people, especially by whites who have not experienced it.

In societies where whiteness has long been privileged, the voices of black and indigenous athletes are important in raising concerns about inequalities and maltreatment according to race. In sport, part of that discussion involves nationalist rituals and symbols that – by their colonialist nature – reinforce structural inequities.

Is it justifiable to question the nationality or commitment to the nation of anyone that critiques the viability of a national anthem or what it stands for, merely by choosing not to stand or sing when it is performed?

2020-07-09
Previous Post: Ten tips for looking after your back while you’re sitting down
Next Post: Food bank donations surged during the pandemic – but look closely at the data and there’s trouble ahead