In the Brazilian Amazon, fires and pandemic are a disastrous mix · Global Voices

During the burning season, extensive areas of the Amazon have worse air quality than in big cities

Fires in the northern state of Acre, in September 2019. Photo by Katie Maehler/Mídia NINJA, CC-BY-NC

This story, written by Izabel Santos and Bruna Melo, was originally published by Amazônia Real. It is republished here as part of a content partnership with Global Voices.

The highest rates of deforestation in the last decade in the Amazon were recorded last year. But 2020 could be even worse.

A study by Brazil’s Amazonian Environmental Research Institute (Ipam), a non-profit NGO, estimates that there are at least 4,500 square kilometres of the deforested area in the Amazon that could be burned this year. This area is equivalent to three times the size of the city of São Paulo.

Ipam’s scientists add that if 2019’s pace of deforestation is maintained in the next few months, this area could double in size by the end of July, the height of the dry season and when most of the burning begins. The report notes that if just 60 percent of this 9,000 square-kilometre area burns, the situation will be similar to that of 2019, when Amazon fires ignited global outrage.

The study, published on June 8, states:

If everything burns, the region may face a public health crisis situation because of the combination of fires and the COVID-19 pandemic, which will further overburden the already collapsed healthcare system caring for the population.

Combating fires and deforestation has become, as well as an environmental protection, a health measure, according to one of the authors of the study, the researcher Paulo Moutinho, a member of Ipam who has a Ph.D. in ecology.

Last year, the towns that burned the most in the Amazon saw their air become 53 percent more polluted, on average, compared to 2018. Moutinho emphasized that if authorities do not act, this could lead to deaths in addition to those caused by COVID-19.

Since March, the region’s public healthcare system has been overwhelmed with cases of COVID-19, and three states in the Amazon are among those with the highest number of cases in Brazil.

According to IPAM, as of the end of May 2020, 20 percent of Brazil’s deaths from the new coronavirus occurred in the northern region, which also had the highest infection and mortality rate per 100,000 inhabitants. As of July 6, Brazil had 64,867 deaths and over 1,6 million recorded cases, according to the Ministry of Health.

In the states of Amazonas, Pará and Mato Grosso, over 20 percent of people live in areas that require up to four hours of travel to reach the nearest town with facilities to deal with serious cases of COVID-19. Small and mid-sized towns, if affected simultaneously by smoke from the fires and infections of the new coronavirus, tend to be unable to meet the population’s needs.

The destructive logic of the fires

In the history of forest destruction in the Amazon, after deforestation a fire is set, explains Ipam’s Science Director Ane Alencar, who also signed the study’s technical report.

As such, whenever the rate of deforestation increases, there is a direct link with the increase in fire outbreaks. Alencar says:

Nobody will spend money to cut down several hectares of forest and then not use that area, even if it is for speculation. That area will be burned.

That is what we saw happen in 2019 and, unfortunately, if nothing is done, that is what we will see in 2020, as the felling continues at a high pace.

The fires increase the amount of smoke in the air, releasing fine particulate material. In the areas most affected by the pollution, there is an explosion in the number of patients seeking medical care for respiratory problems. Another researcher, physicist Paulo Artaxo, from the University of São Paulo, who collaborated in the study, said:

During the burning season, extensive areas of the Amazon have worse air quality than in the centre of São Paulo city due to the fires. This has a strong impact on health, especially for children and the elderly, who are the most vulnerable populations. (…) As the pollution from the fires travels for thousands of kilometres, isolated indigenous communities breathe this unhealthy air, which is far below the air quality standards of the World Health Organization.

Alencar says the environmental authorities need to be assertive in the fight against illegal deforestation and burning:

If that doesn’t happen, we have a risk of putting too much pressure on the health system in the Amazon and, indeed, causing it to collapse.

On April 22, at a cabinet meeting with President Jair Bolsonaro, Environment Minister Ricardo Salles said the administration should take advantage of the fact that the media is focused on the pandemic to “run the cattle herd” — meaning to cut down bureaucratic systems that regulate environmental issues in Brazil. 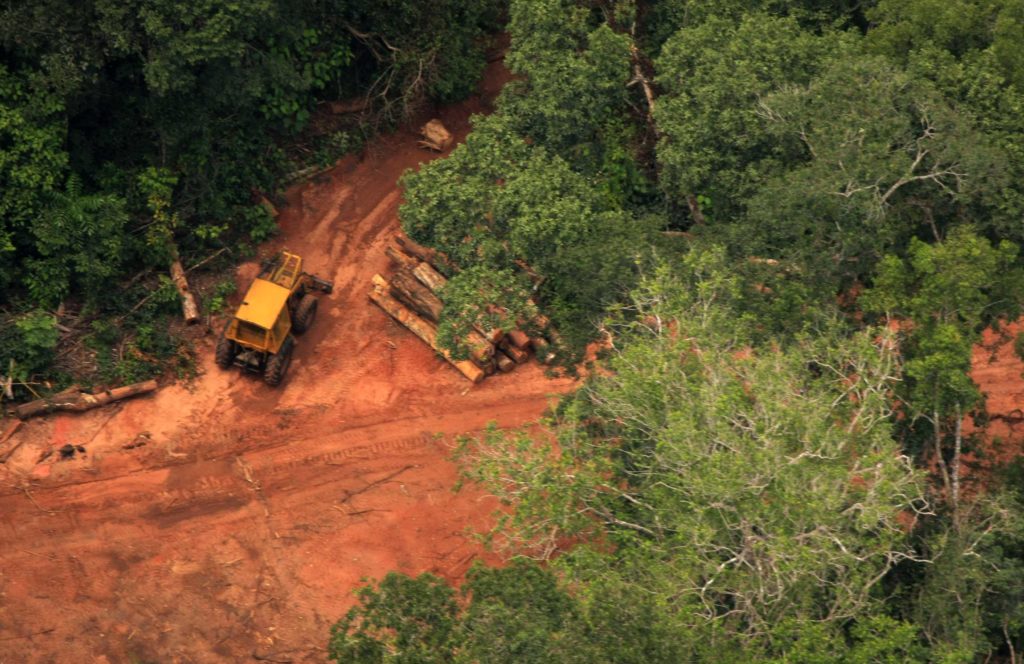 A tractor in an area of illegal deforestation in São Félix do Xingu, Pará, in 2012. Photo: Alberto César Araújo/Amazônia Real

The number of fires in the northern state of Acre detected in 2020 by the National Space Research Institute (INPE), the reference institution for satellite monitoring in Brazil, is already 35 percent higher than in the same period in 2019.

INPE reported that between January 1 and June 14 this year, there were 84 fire outbreaks in the state, compared to 62 fires in 2019. Throughout 2019, INPE detected 6,802 outbreaks of fire in Acre’s forests.

The number of fires recorded in urban areas by Acre’s Fire Department was 6,867 in 2019. As such, the total number of fire outbreaks in the state exceeded 13,000 last year (in urban and rural areas).

The Fire Department spokesman, Major Cláudio Falcão, said that 999 wildfires had been recorded just in Rio Branco, the state capital, by 7 June. In the same period last year, the number was 544. Across Acre state, 1,086 urban fires were recorded. He said:

I don’t know what’s more difficult to control, the fires or the pandemic. Every year we have difficulties, but the population keeps setting fires.

Unfortunately, we’ve recorded an increase in fires. And that makes the health care system even more overburdened because respiratory problems are beginning to occur. We’re going to have a very serious problem.

It’s necessary to raise awareness among the public and strengthen enforcement agencies to alleviate this situation.

According to the Laboratory of Geoprocessing Applied to Environment of the Federal University of Acre (UFAC), in 2019 over 175,000 hectares were burned. The towns that burned the most were Sena Madureira, Rio Branco, Feijó, Tarauacá and Brasiléia. At least 1,700 hectares were affected by fires in the Alto Acre region. A significant part of the forest fires occurred in the Chico Mendes Extractive Reserve and on indigenous lands.

2020-07-09
Previous Post: Meet the MLB Pitcher Who Gave Up Baseball to Farm
Next Post: Czech author Radka Denemarková on Kundera and patriarchy on the Czech literature scene · Global Voices