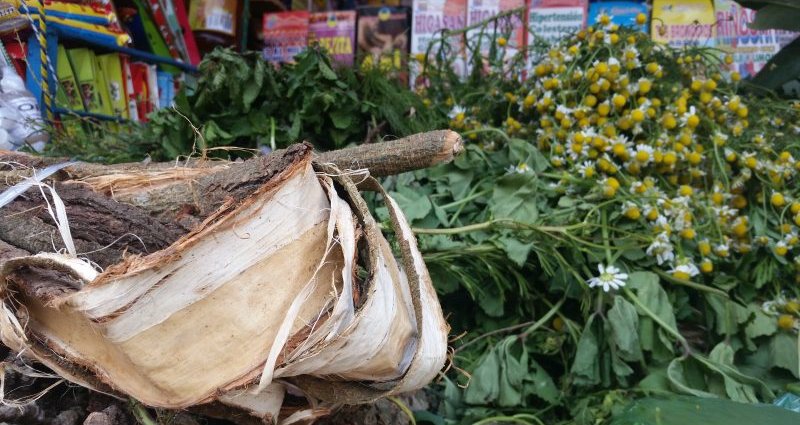 The popularity of natural remedies has soared during the crisis

A herb stall at the La Ramada market in Santa Cruz, Bolivia. Photo taken by the author of this article.

In Bolivia, people are protecting themselves against COVID-19 and the pandemic of disinformation with what they have on hand. Since the start of the COVID-19 outbreak, social networking sites and the media have been flooded with articles promoting the potentially miraculous healing properties of certain plants.

As of 29 June, Bolivia had recorded 31,524 official cases and 1,014 deaths. The country’s health system has collapsed and the peak of the crisis is yet to come. Bolivia now finds itself in a “dynamic and conditioned quarantine” with regional authorities responsible for deciding when and how to restart activities or lockdowns depending on the level of contagion.

“The hospitals are full. We need to find a way to prevent the spread of this disease,” a local convenience store owner, who takes homemade syrups every day, told the national newspaper El Deber. Meanwhile for the indigenous people living on ancestral lands, Bolivia’s poorest and most vulnerable population, herbal medicine is their only option.

Before the pandemic, Bolivians tended to use natural remedies alongside conventional medicine. The remedies are spread by word of mouth and are made by the users themselves according to a 2006 investigation by NGO PIEB, entitled “Mentisán, paracetamol or wira wira? Health and interculturality in the neighbourhoods of Potosí“. The title refers to a popular method used for treating a cold, which includes industrialised products such as paracetamol, along with common knowledge of herbs, such as flowers from the wira wira shrub and the popular menthol ointment Mentisán.

This report also mentions the phenomenon of self-care or home care and how this is related to the users’ economic status. 61% of Bolivians live in multidimensional poverty. Bolivia also has the largest informal economy in the world, which comprises 62.3% of its GDP. Also, many Bolivians experience discrimination in the healthcare system on the basis of their clothing, occupation, appearance or type of illness, which is another reason for self-care. Overall, 1,720 cases of discrimination and/or racism were reported in just 10 years. 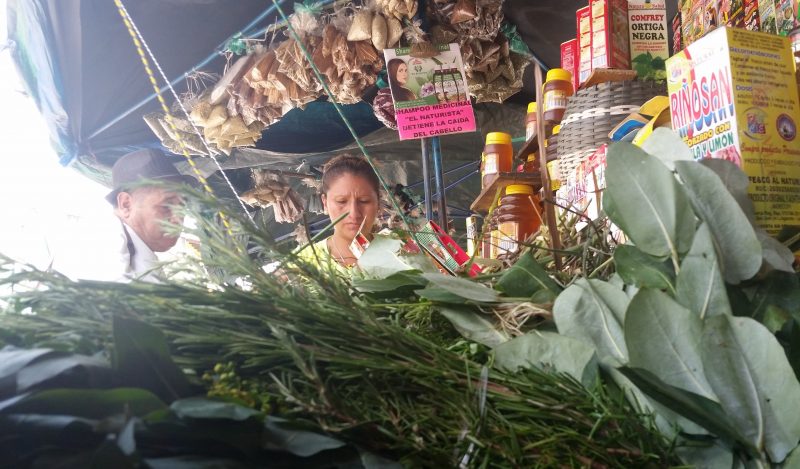 A herb stall in the La Ramada market in Santa Cruz, Bolivia, before the pandemic. Photo taken by the author of this article.

The increased supply of medicinal herbs during the COVID-19 pandemic

Demand for these remedies has soared during the current health crisis. The most sought-after herbal medicines are those associated with curing respiratory diseases and boosting the immune system. At the top of the list of most-wanted items are eucalyptus leaves, followed by chamomile, wira wira, bee honey, ginger, matico leaves (an evergreen shrub) and propolis (a resin-like material made by bees). “Eucalyptus is used for coughs and colds. You can use it to make a herbal infusion or boil it and inhale the steam to improve your symptoms,” a traditional medicine vendor explained to the Bolivian news site Urgentebo.

There’s an abundance of information available on these medicines: from serious recipes such as “Remedies from the Mountain,” a handbook on ancestral medicine published by Amazonian indigenous people, to viral posts on social media and WhatsApp chats that contain treatments using conventional and herbal medicines.

Before the crisis, these natural remedies were already widely sold at fixed and mobile market stalls. However, vendors are now selling them in the streets and outside supermarkets. By searching for eucalyptus in Facebook’s Marketplace section, with Santa Cruz de la Sierra as the location, 51 offerings appear in the search results. The majority of these were posted in June and include branches, oils, steam kits, homemade syrups, pills and seedlings.

Although eucalyptus prices are still relatively low, the cost has risen recently. As a result, the mayor of the small town of Quime, Javier Flores, took eucalyptus branches to the Bolivian capital of La Paz where he recommended their use as a disinfectant and distributed them for free in a shopping district of the city.

The low prices vary between US $0.70 and $14.28 depending on its appearance and on the quantity bought. Bolivians have shared memes online that compare eucalyptus prices with the costs of coronavirus tests in private health centres, which range from US $40 to $200.

Meme based on a scene from the movie “The Pursuit of Happyness”, staring Will Smith.
– How much does a coronavirus test cost?
– 1,000 bolivianos
– Give me eucalyptus leaves worth two Bolivian pesos please

In 2009, the Bolivian government established the Vice-Ministry of Traditional Medicine and Interculturality and then ordered the creation of similar bodies for the country’s departmental and municipal governments. In 2013, Law No. 459 on Traditional Bolivian Ancestral Medicine was enacted.

In April 2020, the Vice-Ministry of Traditional Medicine and Interculturality installed “disinfection booths” in the cities of La Paz and El Alto. These booths are individual cubicles in which a person is sprayed with eucalyptus, chamomile and wira wira vapours for between 3 to 5 seconds.

“The virus has a small capsid that we can weaken with these medicinal plants. The steam penetrates the body’s pores, protecting it from harmful microorganisms and bacteria. It’s preventive, as we don’t have a cure available,” explained the Deputy Minister of Traditional Medicine, Felipe Quilla, to AFP.

Although these disinfection booths were well received by users and became the subject of international headlines, they have also been called into question by researchers. “These chambers don’t make any sense, because plants and their vapours are not disinfectants,” said Róger Carvajal, a natural products researcher at the Institute of Laboratory Services for Diagnosis and Health Research at Bolivia’s Higher University of San Andrés, to the newspaper Página Siete. The so-called “disinfodemic” around natural medicine has now become widespread.

Furthermore, this “disinfection property” of plants has been mentioned by government bodies, such as the ministries of communication and health, and the newspaper Bolivia, the latter of which quoted research findings that were subsequently disproven.

The WHO says that traditional medicine can be used as comfort and reassurance for people, but clarifies that it does not provide any proven prevention or cure for COVID-19. However, in a country where more than half of the population does not have access to any type of health coverage, and where the Unified Health System is overwhelmed and lacks staff and supplies, it’s no wonder that faith rests on infusions of eucalyptus, chamomile and wira wira.