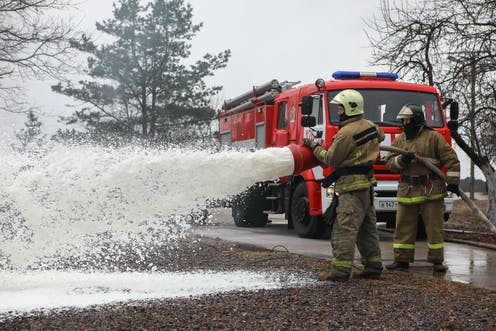 There’s a type of synthetic chemical which has been so widely used over the last 70 years that its remnants can be found in 99% of humans. Even low level exposure to this pollutant is known to increase the risks of several cancers (including breast, testicular and kidney) birth defects and potentially around 800 other diseases, as was recently highlighted in the film Dark Waters.

Yet per- and poly-fluoroalkyl substances (PFAS) continue to be found in a huge range of consumer products, from Teflon cookware and Gore-Tex waterproof clothing to pizza boxes, dental floss and firefighting foams. Unfortunately, the same properties that make PFAS so useful, such as their durability, also make them infuriatingly stubborn to safely and sustainably dispose of. As a result, they are often nicknamed “forever chemicals”.

Scientists are working on a variety of ways to treat PFAS pollution, but many of these cannot completely destroy the carbon-fluorine chain. However, we and others are developing an ultrasound method that can completely degrade PFAS into relatively harmless carbon dioxide and fluoride.

Teflon (or polytetrafluoroethylene) was the first PFAS invented, created accidentally by Roy Plunkett in 1938. Since then, some 4,729 other PFAS have been produced. They all contain the same defining molecular feature, the “perfluoroalkyl group”, which is a string of carbon atoms surrounded by fluorine atoms.

PFAS are surfactants, meaning they act like soap to help mix substances that would normally separate, like oil and water. They also show outstanding resistance to typical pollution treatments, such as the use of ozone, bacteria or heating to temperatures of several hundred degrees.

PFAS are usually found in very low concentrations in the environment but they tend to accumulate in the human body and can become stuck in the liver and surrounding organs. As the concentration increases, PFAS cause damage to genes and liver cells, which contributes to several diseases.

Despite knowing the dangers of these substances since the 1950s, manufacturers were dumping waste PFAS into the environment until the early 2000s. Thankfully, the scandal was uncovered, largely due to American lawyer, Rob Bilott, as described in a New York Times article that inspired the 2019 Hollywood film Dark Waters. But the continued widespread use of PFAS in manufacturing means these compounds are still entering the environment when products are thrown away.

Estimates place total pollution at around 53,000 tonnes and annual production at 42,000 tonnes . Another 30,000 tonnes of PFAS-containing firefighting foams are stockpiled globally.

But we don’t really know how big a problem waste PFAS is, for several reasons. First, no records exist for the quantities dumped or emitted in firefighting foams and millions of household goods over the decades. In fact, manufacturers still aren’t required to report small-scale usage in thousands of products.

Second, PFAS pollution is quickly distributed and diluted throughout the global water cycle, ecosphere and atmosphere, making detection challenging. Finally, testing for all known and unknown PFAS molecules, which are constantly being developed, is immensely time consuming.

Activists are now pressuring corporations and governments to remove PFAS from consumer goods. But even if we stop the running tap of PFAS production, we still need to mop up our historical emissions.

It’s possible to capture PFAS molecules from water on the surface of chemically charged or porous carbon-based materials. PFAS can also be evaporated from contaminated soils using thermal desorption. Thermal desorption works like a clothes dryer for soil, heating and spinning the soil to evaporate off and collect the pollutants.

But you also need a way to break down the PFAS once collected. Until recently, this was only possible with incineration, which is expensive (especially for water-based pollution), highly polluting and often simply re-disperses the PFAS into the air.

So, researchers are working on new techniques such as photochemical oxidation (destruction using light), plasma and electrochemical treatments. Some scientists have even tried grinding PFAS like wheat. But many of these methods ultimately produce smaller PFAS molecules that resist further treatment.

However, ultrasonic degradation or “sonolysis” can completely degrade all PFAS so far tested. The carbon-fluorine chain in PFAS molecules are hydrophobic, meaning when you put them in water they tend to congregate around any gas bubbles present. When you bombard them with high pitched soundwaves, these bubbles undergo extraordinarily fast cycles of compression and expansion, tens of thousands (even millions) of times per second.

This causes the bubbles to grow and then violently collapse under the next incoming soundwave. The collapsing gas momentarily reaches temperatures exceeding the surface of the sun and pressures around a thousand times higher than our atmosphere. This creates a small, localised pocket of plasma inside the bubble that effectively breaks down the PFAS underwater, without the same noxious gases associated with incineration.

We at the University of Surrey are developing ultrasound technology that we have tested against one of the most difficult-to-destroy PFASs, perfluorooctanesulfonic acid (PFOS). PFOS was once commonly used in fabric stain repellents but is now restricted because of its link with kidney disease.

We hope to develop a large reactor capable of treating contaminated domestic water supplies or firefighting foams, as well as adapting the process for soils. If made into a mobile process, this could even be used to decontaminate remote farmlands, lakes and airbases, which are common sites of contamination.

We would also need to combine the treatment with one of the mentioned technologies to collect and separate PFAS from the environment. But we are optimistic that, through changes to the law and research on effective cleanup technologies, we might one day not have to worry about the problem of PFAS pollution.

We receive funding from The Royal Academy of Engineering, Arcadis UK and The Royal Society of Chemistry.

We receive funding from The Royal Academy of Engineering, Arcadis UK and The Royal Society of Chemistry.

2020-07-07
Previous Post: Austerity in the Gulf states: why it’s alarming for women’s progress
Next Post: Babies born prematurely are at higher risk of heart problems throughout life – new study