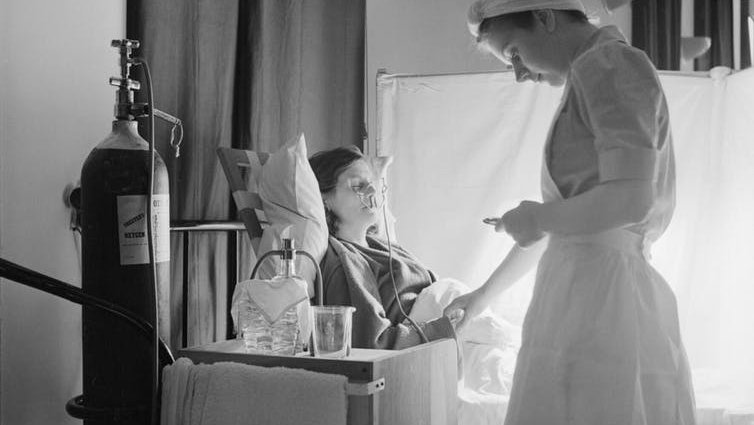 The language of war is often used around COVID-19. While this is often decried as unhelpful, in the field of nursing there are in fact similarities.

When the second word war began, the UK had a massive shortage of nurses, which led to a surge in recruitment of an extra 30,000-70,000 to deal with air raid casualties. The country was also short of some 40,000 nurses before the current coronavirus outbreak. This is only counting vacancies, and is not a calculation of population-based demand.

Increasing the number of nurses today has been possible through the emergency COVID-19 legislation and the establishment of a temporary register by the Nursing and Midwifery Council. Essentially, this has meant calling upon nursing reserves, replicating a strategy used in the war.

The war effort permanently changed the UK’s nursing provision for the better. If there is to be any parallel today, we need to plan what the next steps in nursing policy might be – to build on the best of what the pandemic has brought.

During WWII, a Control of Engagement Order was used to help deploy nurses and trainees aged 18-40 to areas of need. It was supported by a Civil Nursing Reserve, made up of women who weren’t nurses but who had previous training and experience together with untrained volunteers, known as nursing auxiliaries.

An important discovery from surveys at the time was the extent to which the problems of nursing supply were not just of quantity and quality, but also of distribution. The Ministry of Health learned that if it was to direct nurses to hospitals where they were needed, it was going to have to rationalise payments for nurses and those organised through the Civil Nursing Reserve. This led to standardised rates that were in excess of those previously offered by hospitals.

The financial implications of these deepened the government’s involvement in sustaining the running costs of the hospital service. This increased commitment and added momentum to establishing the NHS.

Wars and pandemics reveal the fault lines in our society. As with the first world war, the demands made on citizens during WWII prompted consideration of the kind of society that should be constructed afterwards. Many of the emergency arrangements became permanent fixtures in the postwar welfare state.

Listen to Recovery, a series from The Anthill Podcast, to hear more about how the world recovered from past crises, including an episode on the recovery after the second world war in Britain.

How to improve nursing today

The UK started the pandemic with no reserve capacity, but have rapidly tried to create some headroom via the temporary register. This has been achieved by returning 20,000 nurses from recent retirement. The gap has also been plugged by offering clinical placements to second- and third-year student nurses and midwives. Just under 20,000 students were deployed, Higher Education England has said.

Given the shortage before the pandemic, it is worth considering how to incentivise those who have volunteered their services to continue afterwards. Relying on appeals to patriotism will not wash.

The prime minister’s own experience of nursing care has resulted in him expressing his heartfelt gratitude to the two nurses who provided surveillance and oversaw his care. The key will be to ensure that such fulsome praise and appreciation of nurses’ skills translates now into a well-structured and remunerated pay system. Actions that appear to take for granted the efforts of those who worked through the crisis – including students – need to be avoided.

There also needs to be a clear career structure and opportunities for progression that builds nursing leadership to support nurses to stay in the profession. This is where the greatest gain and return on investment can be made. Echoing the recommendations from WHO’s recent State of the World’s Nursing Report, we need a massive investment in education – including continuing education for qualified nurses – decent jobs and leadership at all levels.

Equally important is creating a proper reserve of nurses – trained in public and population health – for responding to future pandemics. My mother, who was a nurse, was a member of the Civil Defence Corps (CDC) after the war, which trained volunteers in community emergency preparedness. Perhaps the spirit and substance of the CDC can be recreated to create a citizen volunteer force trained in emergency preparedness that could mobilise in the aftermath of a future national crisis. Citizen participation in emergency preparedness is central in some countries, such as Finland. Having something similar could build resilience into our health system so that it can respond to future shocks.

Although direction of nursing labour during the war proved controversial, it helped to secure supply at hotspots of need. In the process, however, it depleted areas that were short of staff before the war.

TB sanatora, chronic diseases, mental health and midwifery were all areas that felt the implications of labour shortages. With unmet need, there was rising morbidity in these areas when the NHS was established.

One other, major difference between the 1940s and today is the attention given to mental health. The crisis is having an affect not only the population but on health workers themselves – and on an unprecedented scale.

With some exceptions, there was scant recognition of the mental health fallout for the population and health workers after WWII. Today, investment is needed in building support of many different kinds on a scale hitherto unimaginable.

This is our moment. We must use the heightened value of nursing to craft positive policies and investment that will secure frontline care for the future.

Anne Marie Rafferty is president of the Royal College of Nursing, UK and co-director of the NIHR Health and Social Care Workforce Research Centre.