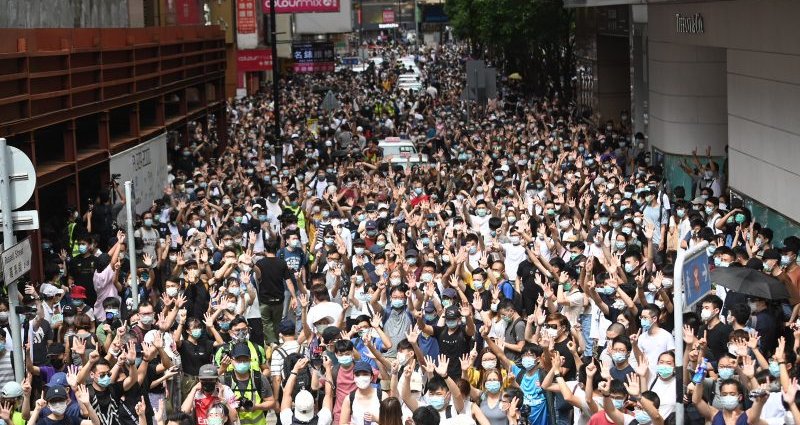 Thousands of protesters took to the street on July 1 defying the newly enacted national security law. Image from inmediahk.net

On the 23rd anniversary of the Handover of Hong Kong to China and on the day Beijing’s draconian national security law for the city was enacted, thousands of protesters defied the police ban to take to the streets.

The July 1 protests led to the arrests of 370 people. Some were charged with participating in unauthorized assembly and obstructing law enforcement while 10 were charged under the new national security law.

Seven police officers were injured, with one stabbed in the arm by a protester during the chaos.

Despite the heavy police presence, thousands of protesters went “shopping” in various commercial malls at Causeway Bay and flooded the streets at around 3 PM.

As the riot police chased away the protesters from main roads with pepper spray, batons and water cannon, they sheltered in smaller streets and alleys before marching back to the main road whenever they felt safe.

#HongKongSecurityLaw :day of defiance as protests break out in #HongKong, about 370 arrested. Thousands of demonstrators play cat and mouse with police across Causeway Bay, Wan Chai, shouting slogans, an officer stabbed in clash. Officials celebrating 23rd anniversary of handover pic.twitter.com/3RaaPZkEys

The majority of the side streets along the main roads were flooded with protesters, chanting the slogan “Five demands, not one less” and “Hong Kong independence is the only way out”:

Ignore the threats from #CCP, #HongKong communist govt, police, and the new draconian law, massive civilians marching in #CausewayBay towards #VictoriaPark. Chanting the prohibited slogans:
“Independence of Hong Kong is the only way out!”@appledaily_hk#無懼惡法#七一遊行 pic.twitter.com/uQQYLmeveQ

The number of protesters that turned out was huge considering the fact that every individual had to overcome their fear of being arrested.

Under the current state, the mere act of singing a protest song in the street can invite a body search by armed police:

A female is being stopped and searched by the police officers while she was singing #CanYouHearThePeopleSing near #Sogo department store .

The first case of an arrest citing the national security law involved a man displaying a HK independence flag.

[BREAKING] In #CausewayBay, #HKpolice has arrested a man with a HK independence flag with the #NationalSecurityLaw. He would be the first arrest of the National Security Law.#HongKong #HongKongProtests
Source: RTHK pic.twitter.com/4RXiCvIRgr

We are no rioters, please take a look of this video, and you will know we are always there to help each other despite all the threat and risk. I am so proud to be a Hongkonger. #HKPoliceTerrorists #HKProtests https://t.co/IrUDkX7bnL

At around 8 PM the riot police charged Time Square — a landmark shopping mall in Causeway Bay — with pepper spray and arrested a number of protesters:

One huge banner summed up the defiant mood of protesters. “We f***ing love Hong Kong,” the banner read. 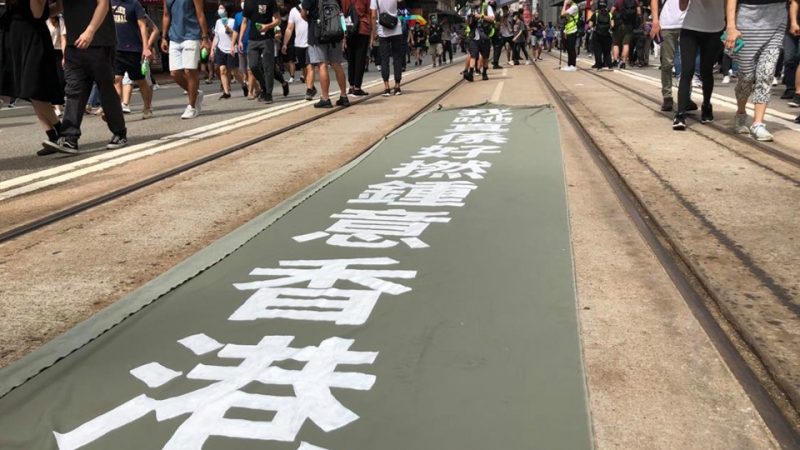