Research: land use challenges for Indonesia’s transition to renewable energy 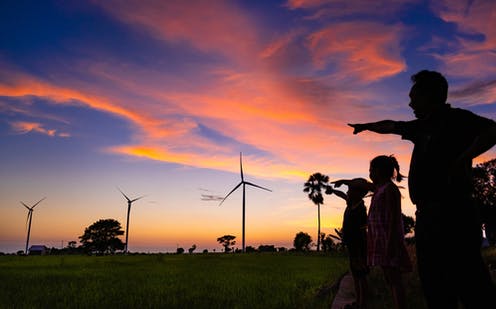 The world’s fourth-highest emitter of greenhouse gases, Indonesia, is heavily reliant on coal to generate electricity. Its coal-fired power plants produce a third of the country’s emissions.

To minimise its future greenhouse gas emissions, Indonesia is gearing up to develop its vast renewable energy resources – including solar, wind, and geothermal.

Indonesia also aims to meet its future energy demand, which is set to grow another 80% by 2030.

The analysis found that the recent influx of private sector investment has led to an increase in the size and land requirements of proposed solar PV projects.

This suggests that while the installation of renewable energy generation may be increasing, this growth raises new challenges, including increased demand for land.

Recent estimates suggest that installing enough solar PV to meet Indonesia’s 2050 target of 1,500 gigawatt (GW) of solar PV power plants will require at least 8,000 square kilometres or about 0.4% of the country’s land area.

While 0.4% appears insignificant, such estimates obscure the highly contentious nature of land use and tenure in Indonesia.

Acquiring land for energy project development is a lengthy and complicated process.

Before proceeding with land acquisition, project developers must demonstrate compliance with existing regional spatial plans. They must also receive approval from the Ministry of Forestry for the use of forest land, which accounts for approximately 70% of land in Indonesia.

Having met these criteria, developers can obtain a Location Permit issued by the regency with jurisdiction over the project location.

From the date of issuance, it is the project developer’s responsibility to complete all necessary land acquisition transactions or risk having the permit revoked.

The complexity of the land acquisition process and its potential implications for existing land users is evident in the context of the Tolo Wind Farm in Jeneponto Province in southern Sulawesi. The wind farm is currently the second-largest operating wind farm in the country.

While small by international standards, the project site spans a total of eight villages across four districts.

The land acquisition process affected approximately 500 landowners and 100 sharecroppers, with the majority losing access to no more than 10% of their total land holdings.

The project’s social impact assessment suggests that almost one-third of these landowners and sharecroppers were vulnerable due to the absence of off-farm income outside the project area.

Research to understand the long-term implications of this land use transformation is ongoing.

While technological innovations such as floating solar PV can reduce the needs for land for renewable energy generation, the complexity of land acquisition and potential livelihood threats remain.

Who stands to benefit from Indonesia’s energy transition?

The Tolo Wind Farm example highlights the centrality of land and livelihood transformation in the context of Indonesia’s energy transition.

Under the law, two-thirds of the Indonesian population holds land via informal title or girik.

While recognised by the heads of a village or municipality, those land documents are considered weaker than the full legal certified title or as leasehold.

The government has started to revolutionise its land management system with the issuance of several regulations.

To accelerate the development of energy infrastructure, President Joko “Jokowi” Widodo issued Decrees in 2015 and 2016.

The government also wants to pass a controversial “omnibus bill” to streamline processes of land acquisition for national infrastructure projects, including renewable energy.

However, a narrow focus on energy generation is insufficient to meet other energy-related challenges such as delivering electricity to the approximately 4.5 million Indonesians who currently lack affordable and reliable access.

The perceived need for investment in renewable energy development has pushed the government to partner with the private sector.

Yet, this partnership may produce serious contradictions. With support from private investors, the government may favour large-scale, land-intensive technologies projects. This means efficient and resilient small-scale projects that may improve energy access and empower local economic development may be overlooked.

Therefore, the government needs to pay attention to alternative forms of finance for renewable energy development to ensure that the projects would complement rather than compete with existing land uses and livelihood strategies.

The government must combine this search for alternative forms of finance with land reform: a necessary yet often overlooked component of any national effort to promote renewable energy development in Indonesia.

Sean F. Kennedy menerima dana dari Institute of Sustainability, Energy, and the Environment at the University of Illinois at Urbana-Champaign.

2020-07-03
Previous Post: How to manage plant pests and diseases in your victory garden
Next Post: Hong Kong activists now face a choice: stay silent, or flee the city. The world must give them a path to safety