Stopping koala extinction is agonisingly simple. But here’s why I’m not optimistic 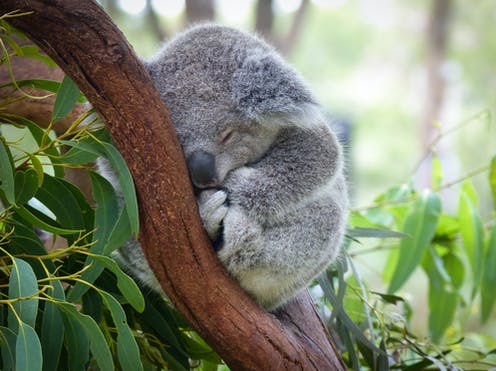 On Tuesday, a year-long New South Wales parliamentary inquiry revealed the state’s koalas are on track for extinction in the wild by 2050, without urgent government intervention.

Habitat destruction and fragmentation for agriculture, urban development, mining and forestry has been the number one koala killer since European occupation of Australia. This is compounded by the unabated impacts of climate change, which leads to more extreme droughts, heatwaves and bushfires.

The report, ambitiously, makes 42 recommendations, and all have merit. The fate of NSW koalas now relies on a huge commitment from the Berejiklian government to act on them. But past failures by a federal government inquiry into koalas suggest there’s little cause for optimism.

First, let’s look at the report’s key recommendations and how they might ensure the species’ survival in NSW.

Leadership needed at the local level

Real, on-ground koala conservation actions take place at the local level. “Local” is where councils give development approvals, sometimes to clear koala habitat. And it’s where communities and volunteers work on the front line to save and protect the species.

Recommendation 10 in the report addresses this, suggesting the NSW government provide additional funding and support to community groups so they can plant trees and regenerate bushland along koala and wildlife corridors.

À lire aussi :
A report claims koalas are ‘functionally extinct’ – but what does that mean?

Mapping, such as where koalas have been recorded and their habitat, is a critical component for local councils to develop comprehensive koala management plans.

One recommendation suggests a review of the “biodiversity offsets scheme”, where generally developers must compensate for habitat loss by improving or establishing it elsewhere. It is embedded in the NSW Biodiversity Conservation Act 2016, and other state and territory governments commonly use offsets in various conservation policies.

À lire aussi :
The Blinky Bill effect: when gum trees are cut down, where do the koalas go?

It’s of paramount importance to increase the connected, healthy koala habitat in NSW, particularly after the bushfires.

One tool to achieve this is laid out in recommendation 41: to investigate establishing the Great Koala National Park. Spearheaded by the National Parks Association of NSW, this national park would see 175,000 hectares of publicly owned state forests added to existing protected areas.

It total, it would form a 315,000 hectare reserve in the Coffs Harbour hinterland dedicated to protecting koalas – an Australian first.

À lire aussi :
What does a koala’s nose know? A bit about food, and a lot about making friends


It would be a great day if such a park was established and replicated throughout the NSW and Queensland hinterlands. Research shows that in those regions, the future climate will remain suitable for koalas, and urbanisation, agriculture and mining are not currently present in these parks.

But it’s worth noting Australia’s national parks are under increasing pressure from “adventure tourism”. Human recreation activities can fragment habitat and disturb wildlife, for example by constructing tracks and access roads through natural areas.

Humans must not be allowed to compromise dedicated koala conservation areas. Intrusive recreational activity is detrimental to the species, and can also reduce the chance quiet park visitors might spy a koala sitting high in a tree, sleepily munching on gum leaves.

This rule should apply both to existing national parks, and a new Great Koala National Park.

Failures of past inquiries

The tragic fate predicted for koalas in NSW depends on the state government’s willingness to act on the recommendations. Developing wordy, well-intentioned documents is simply not enough.

We need look no further than Australia’s key environmental legislation, the Environment Protection and Biodiversity Conservation (EPBC) Act, to realise this.

After a 2012 Senate inquiry into the health and status of koalas, the species was officially listed as “vulnerable” under the EPBC Act. But since then, tree clearing and declines in koala numbers have continued at a furious pace across Queensland and NSW.

One of the shortcomings of the federal listing for the koala is in its Referral Guidelines, which recommends “proponents consider these guidelines when proposing actions within the modelled distribution of the koala”. In other words, informing the government about clearing koala habitat is only voluntary. And that’s not good enough.


The failure of the 2012 inquiry and the EPBC Act to protect koalas should serve as a wake-up call to the NSW government. It must start implementing the recommendations of the current inquiry without delay to ensure Australia’s internationally celebrated species doesn’t die out.

Koala conservation must take priority over land clearing, regardless of the demand for that land. That principle might seem simple, but so far it’s proved agonisingly difficult.

2020-07-02
Previous Post: Victoria is on the precipice of an uncontrolled coronavirus outbreak. Will the new measures work?
Next Post: In My Blood It Runs challenges the ‘inevitability’ of Indigenous youth incarceration