Forget JobSeeker. In our post-COVID economy, Australia needs a ‘liveable income guarantee’ instead 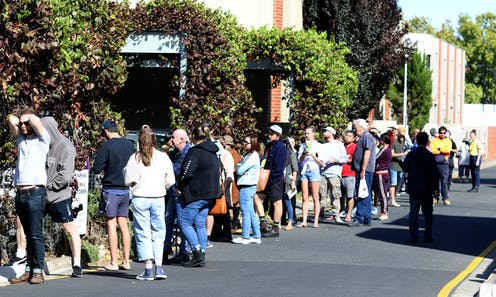 There are now less than three months to go before the expanded JobSeeker payment is due to end.

As a result, there is a growing political debate about what should happen to the unemployment payment that was roughly doubled in April.

Read more:
How to improve JobKeeper (hint: it would help not to pay businesses late)


While the government is reportedly considering a revamp of both the JobSeeker and JobKeeper payments, we believe a much broader rethink is needed of the way we provide income support to people without a market income.

Instead of an unemployment payment – or the dole – we need a liveable income guarantee.

‘Snapback’ is not going to happen

It’s increasingly clear a “snapback” to the pre-pandemic way of doing things is not realistic.

The recent upsurge in coronavirus cases reminds us the new normal will see all sorts of economic and social activity constrained and subject to sudden lockdowns.

As a June Grattan Institute report has also shown, we need more fiscal stimulus, not a return to pre-pandemic fixations on debt and deficits.

On top of this, we have also seen grim announcements of job cuts at Qantas, the sale of Virgin and other well-known brands collapsing. Many smaller businesses will follow their lead.

Thousands of hardworking Australians, many of whom have never been unemployed before, will be thrown out of work – some of them for a long time.

We need a new unemployment system for a new reality

The system of unemployment benefits that was in place before COVID-19 worked on the assumption there were plenty of jobs for anyone capable of filling them.

Unemployment was therefore seen as reflecting personal defects – either unwillingness to work or, more charitably, a lack of particular skills needed for “job readiness”.


This assumption was clearly untrue, even before the pandemic. As the long history of booms, busts and economic crises have shown us, all workers are vulnerable to losing their job through no fault of their own.

There aren’t jobs for everyone

The failure of labour markets to provide full employment is also seen in the increasing levels of underemployment, particularly among young people.

Underemployed workers are, by definition, willing and able to work, and ineligible for unemployment benefits. But they are nonetheless unable to secure a full-time job.

For an unacceptably high proportion of young people, the experience of the labour market has been one of stringing together part-time gigs, while trying unsuccessfully to start a career. Official measures of youth unemployment hit 16% in May. A further 25.8% of young Australians between 15 and 24 years old were underemployed.

We need to do something different

Even before coronavirus, there was a pressing need to reform the way we support unemployed people.

JobSeeker (or its predecessor, Newstart), had not been increased in real terms since 1994. Business, community groups and researchers were among the loud chorus pushing for an increase to the payment which, on average, is about A$45.50 a day.

Read more:
When the Coronavirus Supplement stops, JobSeeker needs to increase by $185 a week


But to respond to the post-pandemic era, we need to make more comprehensive changes to the way we support unemployed and underemployed Australians, that acknowledge the scarcity of jobs.

Moving forward, we should adopt the concept of a liveable income guarantee or living wage. The living wage is closely linked to the idea of participation – starting from the principle everyone has a right to a liveable income and a responsibility to contribute to society.

Ideas of this kind, under names including “universal basic income”, “guaranteed minimum income” and “participation income” have been discussed since the 1960s.

They have attracted more attention in recent years as the failure of the current economic system to deliver full employment and broad improvements in living standards has become more apparent.

How would a liveable income guarantee work?

Many people already productively contribute to society in different ways, such as caring, but their work is largely obscured by the narrow measure of formal employment.

The social security system only partially supports those unable to work due to age, disability, unemployment, or caring needs. And support for all of these categories has been cut back and subjected to conditionality under successive governments, operating on the ideology of market liberalism.

Read more:
Vital Signs: COVID-19 recession is different – and we need more stimulus to deal with it.


There are many possibilities of what contributions could be included and “paid for” under a liveable income guarantee. Most of them have some precedent, but have not been considered as part of a comprehensive program of social participation. The options include:

All of these productive activities should be given the same terms, income and assets test as the pension.

Including supplements, a single pensioner currently receives up to $944.30 per fortnight. This is paid to the aged, people with disability and carers.

Without the Coronavirus Supplement, a single person on the JobSeeker Payment receives $574.50 a fortnight (including the Energy Supplement).

How to pay for a living wage

We estimate the annual cost of a policy along the lines suggested above would be less than $30 billion. About $10 billion a year would be needed to set all benefits equal to the age pension. The cost of expanded eligibility for the liveable income guarantee is harder to estimate, but unlikely to be more than $20 billion a year.

Most of this could be financed simply by forgoing the tax cuts for high income earners legislated by the Morrison government after it won the 2019 election.

The welfare system should be more like the tax system

When it comes to government checks on people’s participation in their chosen community activities, we need to look to the tax system.

Currently the welfare system imposes strict compliance rules to prevent cheating at the outset. By contrast, the tax system is operated on the basis of self-assessment.

Taxpayer declarations are assumed to be true in the first instance, but subject to auditing. The liveable income guarantee should operate like this, where people submit their own participation declaration, as we do with our tax returns.

Looking ahead, we need to focus on cooperation rather than competition.

This means giving everyone the opportunity to contribute to society, whether or not they generate a market income. A liveable income guarantee will be a crucial step towards this goal.

Troy Henderson has received funding for consulting work for The Centre for Future Work at the Australia Institute. This work was not focused on Basic Income.

Troy Henderson is a member of the Basic Income Earth Network, the peak academic body for Basic Income scholarship.

John Quiggin does not work for, consult, own shares in or receive funding from any company or organization that would benefit from this article, and has disclosed no relevant affiliations beyond their academic appointment.

2020-07-02
Previous Post: Decline of the English pub: coronavirus compounded the industry’s problems
Next Post: Coronavirus: it is morally indefensible for a nation to keep life-saving drugs for itself