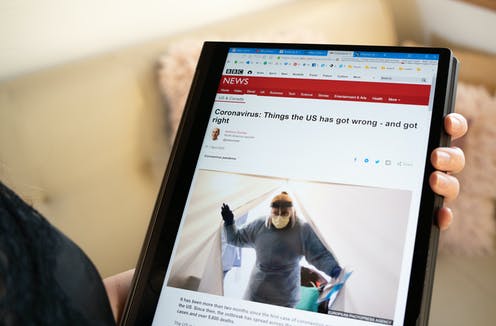 News media have been especially important during the COVID-19 pandemic,
as good quality information has literally become “a matter of life and death”.

New Ofcom data confirms that we are increasingly reliant on the internet and that it has become ever more important for accessing “news, information and civic processes”. But given this shift online, which news brands have been the go-to defaults during this period of government guidance, stark daily statistics and intensified scrutiny?

Between April 28 and May 5, we surveyed 1,268 people with a mix of demographics, including a wide range of age groups. This was part of a project by journalist Shirish Kulkarni that is an element of Clwstwr, a programme supporting innovation in news and screen in Wales supported by researchers from Cardiff and Swansea universities. The results of the survey have not been published in a peer-reviewed journal and should be taken as indicative.

Respondents were asked to name their three top news providers – and while COVID-19 was not mentioned specifically, the question was posed during a seven-day period when the number of UK COVID deaths increased from 25,319 to 28,446. Where our respondents were getting their news about the pandemic will, we imagine, have influenced their responses.

Inevitably there were some vague answers such as “newspapers”, “TV”, “the internet” and so on – and all such responses were assigned as “other”. In all, these accounted for just over 4% of the 3,520 individual choices.

Variations on a theme were coded generically – for example, the Mail Online was coded as the “Daily Mail”, while Good Morning Britain was coded as “ITV”. Gateways to news brands – such as Facebook, Twitter or social media – were omitted from this part of our analysis, since we were more interested in who the main news providers were, rather than the route that consumers had followed to get to them.

We conclude that legacy news brands have remained extremely resilient across the crisis, even despite ongoing debates about the quality of their scrutiny of the government’s pandemic policies. The headline finding is that the BBC is the UK’s overwhelming news provider of choice.

Indeed, more generally during the COVID-19 crisis, viewing figures for television news have been boosted, not least since the daily news conferences became central to the UK public’s understanding of the how the pandemic developed.

While the BBC accounted for almost one-third of all selections, the next highest – the Guardian – was chosen by around one in seven, meaning that the corporation was the top selection by a significant margin.

Aside from discussions addressing the editorial positioning of these top two, this seems a considerable validation for journalism where – in theory at least – quality and public service are prioritised over profit.

The more extreme editorial approaches of the Daily Mail and The Sun are less popular within our sample, indicating perhaps, that in times of crisis, all ages might be drawn towards more moderate, considered journalism.

The BBC of course, is consistently cited by Ofcom as the UK’s most consumed news source. But where our findings diverge from Ofcom’s research is that far from showing that younger audiences might be losing touch with the BBC, we suggest that the corporation remains resolutely popular with the under-24s.

Moreover, the report said, there was no evidence that younger audiences were “increasingly using social media and services such as Apple News or Upday”. Indeed, the combined mentions of “social media”, “Twitter”, “Facebook”, “Instagram”, “Apple” and “Upday” account for only 5.5% of choices, around one-sixth of the number choosing the BBC.

The popularity of the BBC across all age groups is another reminder that the UK prime minister, Boris Johnson, will need to tread carefully towards any licence fee reform.


Sky’s emergence as a clear second-choice broadcaster validates its transition – from the point of view of audiences at least – from previously dominant associations with “football, films and American dramas”.

But while our findings spell good news for broadcasters, other news providers and parts of the audience have much less to celebrate. US news channel CNN (1.3% of choices) was just as popular as all UK local news media combined – a stark reminder that local news often struggles for oxygen within a crowded market.

Only two of the top 11 news brands (BBC and ITV) are obliged to provide news from across the whole of the UK. Healthcare is devolved and it seems reasonable to assume that people most need access to news specific to their own regions, lives and families.

While our findings reflect that even despite the steady migration towards digital, legacy brands remain strong, they also reflect a more generic approach from news audiences that result in a deficit of more pertinent, local information.

Richard Thomas receives funding from the ESRC albeit not for this particular project.

Justin Lewis does not work for, consult, own shares in or receive funding from any company or organisation that would benefit from this article, and has disclosed no relevant affiliations beyond their academic appointment.

2020-07-02
Previous Post: Joy Hester – a body of work, remembered at last
Next Post: The Daily Telegraph lost its Geoffrey Rush defamation appeal. What does this mean?