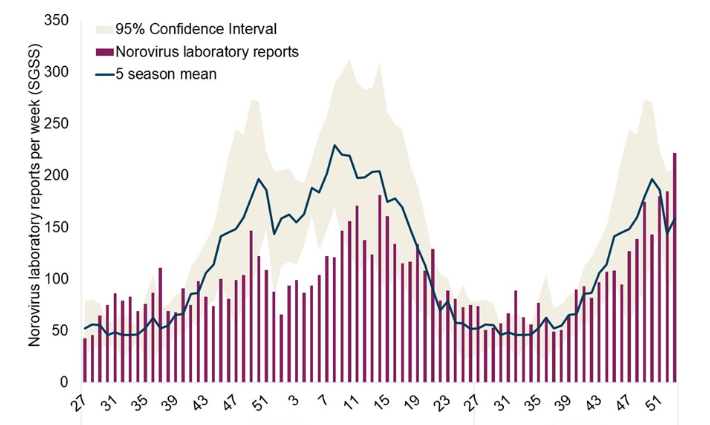 BRITS have been urged to protect themselves against norovirus after cases surged by almost a third in two weeks.

Infections are 34 per cent higher than the five-season average and have surpassed pre Covid levels, new data from the UK Health Security Agency (UKHSA) shows.

The majority of cases have been seen in those over the age of 65 and those living in care homes.

Norovirus, also commonly referred to as the winter vomiting bug, is a stomach complaint that causes vomiting and diarrhoea.

In most cases, you will suddenly become ill, with symptoms often lasting up to three days, according to the NHS.

Dr Lesley Larkin, surveillance lead, gastrointestinal infections and food safety (One Health) division at the UK Health Security Agency, said: “Laboratory reports of norovirus have increased in recent weeks and are about a third higher than we would typically see at this time of year.”

Cases of the bug are now up 26 per cent from the last two weeks, with UKHSA warning that unusual norovirus activity is likely to continue into the Spring.

Dr Larkin said those who catch the illness should not be going to work and poorly children should be kept off school.

She also urged people who think they have it to avoid visiting hospitals or care homes, and advised only sending kids back to school at least 48 hours after symptoms have cleared.

“Make sure to wash hands and disinfect all surfaces after any episode of illness. Taking these steps will help you stop passing the virus on,” she said.

The expert said that cases have most notably increased in those aged 65 and over.

“Although we haven’t seen an increase in the number of outbreaks in care homes.

“One of the best ways to protect yourself against norovirus is by practising good hand hygiene.

“This includes thorough hand washing with soap and warm water regularly but especially after using the toilet or an episode of illness and before eating or preparing food.

“Most people will make a full recovery within 1-2 days but it is important to drink plenty of fluids to prevent dehydration, especially in the very young, elderly or those with weakened immune systems.”

The 6 signs you have the bug

The symptoms of norovirus come on suddenly and the NHS states the main signs are:

The symptoms start suddenly within one to two days of being infected, guidance states.

If you have the illness, the best thing to do it rest and have lots of fluids to avoid dehydration.

You’ll start to feel better in two to three days.

Norovirus is spread very easily and you can catch it if you’ve had close contact with someone who has had the bug.

You might also be unwell if you have touched surfaces or objects that have the virus on them, and then you’ve touched your mouth.

Eating foods that have been prepared or handled by someone with the bug also raises your risk of catching it.

If you or your child’s symptoms get worse and you’ve been ill for more than seven days you should call 111.

You should call 999 or go to A&E if you vomit blood or have vomit that looks like ground coffee, or if you have green or yellow-green vomit.

NHS guidance states you should also seek emergency help if you might have swallowed something poisonous, if you have a stiff neck and pain looking at bright lights and if you have a sudden, severe headache or stomach ache.

2023-01-20
Previous Post: Does COVID really damage your immune system and make you more vulnerable to infections? The evidence is lacking
Next Post: The 25 greatest American rock bands of all time: Guns N’ Roses to Bon Jovi