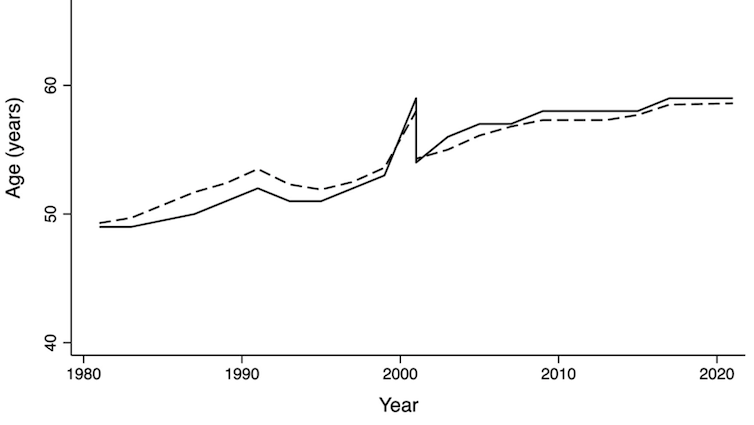 US president Joe Biden is clearly frustrated about the focus on his age. In mid-December last year he reportedly vented to allies, saying: “You think I don’t know how fucking old I am?” But, as attention turns to the 2024 election, the prospect of Biden – now 80 years old – running for another term which would last until he is 86, means that this is an issue that is unlikely to go away.

And rightly so – Biden is the oldest US president in history. Taking into account other prominent US politicians such as Donald Trump (who is 76) and Senate majority leader Chuck Schumer (who is 72), the age of American political leaders has become a hotly debated topic.

But it’s not just a factor in party leadership. In the legislative term 2020-2022, the average member of the US House of Representatives was about 20 years older than the average citizen. In addition, the age of members in the House have risen for the past four decades (see Figure 1).

Figure 1. Age of members in the US House of Representatives

Voters seem to think that this is a problem. A September CBS News poll illustrates that Americans voice concern over the lack of youth in politics. Almost 47% state that having more young people in office would make politics better. Moreover, a Reuters/Ipsos poll taken in November 2022 finds that almost nine out of ten Americans support a cutoff of 75 years old for serving as president.

In our new book Youth without Representation, we address young adults’ under-representation in parliaments and cabinets. We show that young adults – those aged 35 years or below – tend to be scarce among decision-makers. Globally, people 18 to 35 years face an under-representation in legislatures by a factor of three, relative to their share in the population (their share of the electorate is three times bigger than among legislators), and at a factor of ten in cabinets.

The stylised figure 2 below illustrates this discrepancy. We found these patterns in many democracies including Japan and India as well as in non-democracies such as Egypt.

Figure 2. The underrepresentation of youth in parliaments across the globe.

I think the old age of legislators is a problem. We have the world’s largest generation ever of youth. So if decisions are being made by an age cohort that is decades above that and is not attuned to their perspective I think it’s a serious democratic deficit. I used to be of the view that people needed to come in to parliaments with some degree of maturity and background. I actually no longer think that. I think a parliament is a place where young people with fresh perspectives should be. And I think our political system should accommodate that.

Youth issues not on the agenda

The age discrepancy between leaders and citizens raises essential questions. What explains the under-representation of youth in politics – and how can this situation be changed?

The under-representation of young adults in decision-making can mean that issues important to them fall off the agenda – climate change being the most obvious. And their relative absence can contribute to a vicious cycle of alienation, also including low voter turnout and political interest among youth.

One of the things we found was that young candidates are less likely to succeed in the electoral process, compared to older candidates. This is partly because they are often nominated in races where they have little chances of winning or are designated to low placements on party lists. But while these disadvantages apply to many parties, there is also variation. Across the more than 270 parties in the 52 countries we analysed, we found that newly created parties have generally younger MPs. But as these parties mature, representatives tend to get older as well. Parties with younger leaders tend to have a younger group in the legislature.

A big barrier for young candidates is their lack of experience. But, with selection processes that favour incumbency, there is, all too often, little space for parliamentary turnover. Moreover, many assemblies around the world have a culture of seniority in which youth struggle to be noticed.

Across the 100 countries we studied, we found effects from rules of minimum age requirements for office. Many countries across the globe only allow those above 21, 25 or even 30 years to run (for example the US Senate requires candidates to be at least 30). Not only do these rules hinder youth legally, but also signals who politics is for. We also discovered that countries with proportional representation in their electoral systems, including those in Scandinavia, elect a higher share of young adults.

When looking at cabinets, we find similar patterns. For instance, younger leaders tend to make cabinets younger. We also detect a contagion effect, that is, a young parliament triggers a young cabinet – and this happens regardless of whether cabinet members must be elected MPs or not.

What can we do to change the situation? Term limits could be a way to break the incumbency advantage and give youth a chance to claim nomination. Setting the age barrier to run for office at 18 would allow youth to run and send a message that they are welcome in politics. At the organisational level, political parties must work to break the culture of seniority – quotas could be an efficient option, if seriously implemented.

Young people will live the longest with the laws we are adopting now. They should be given the chance to be involved in the decision-making process.

2023-01-05
Previous Post: Arsenal in Mykhailo Mudryk transfer fight with Chelsea ‘willing to beat ANY offer Gunners make to Shakhtar Donetsk’
Next Post: Ukraine war: despite Russian setbacks, an end to the conflict is not yet in sight