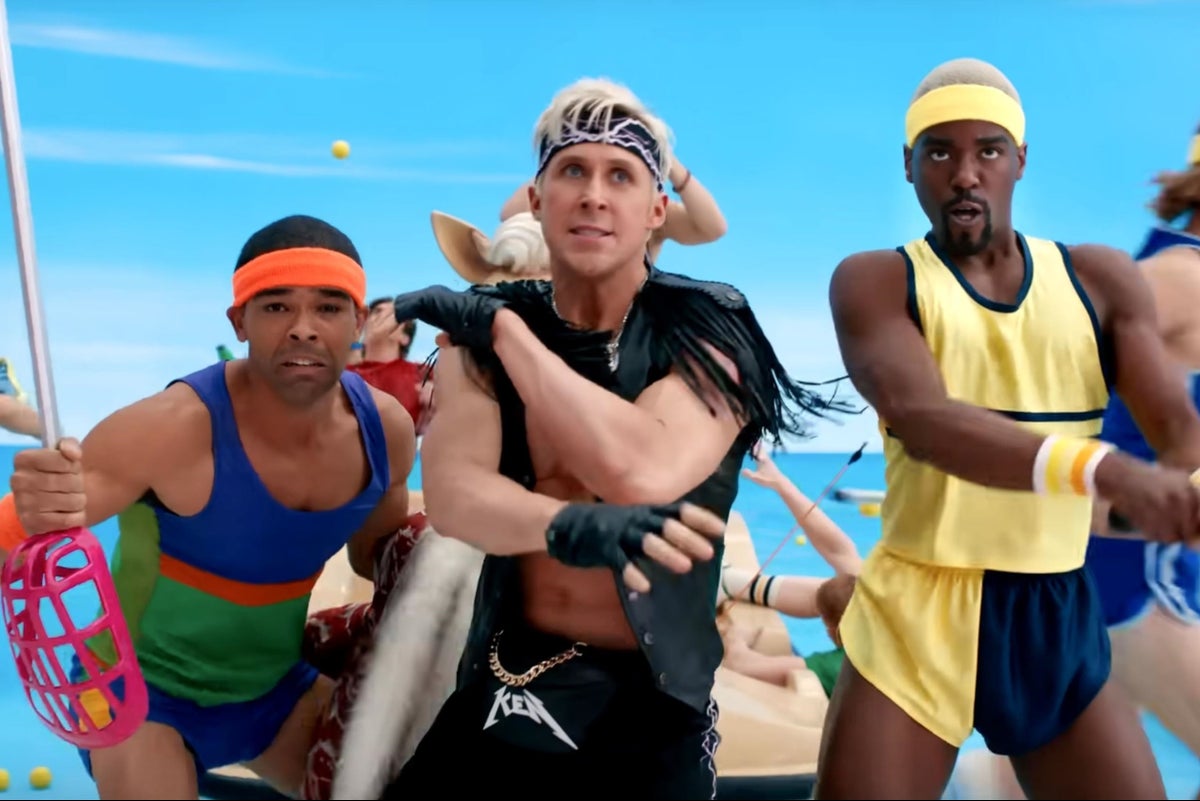 Cate Blanchett is on typically splendiferous form as an out and proud lesbian conductor, whose past comes back to haunt her. Writer-director Todd Field has created an anti-heroine for the ages, an elegant predator alive only to music, her own feelings and, fitfully, the needs of the daughter she shares with her accommodating wife (a luminously haggard Nina Hoss). This zeitgeisty black comedy will dazzle and disturb anyone who’s ever used their power unwisely. A must-see and a must-hear.

In Steven Spielberg’s semi-autobiographical coming of age drama, Michelle Williams crushes it as bored housewife and doting mother Mitzi. By turns coquettish and unhinged, our piano-tickling heroine has a secret and when her budding filmmaker son discovers it the family goes into freefall. Like the wonderful West Side Story, The Fabelmans hasn’t connected with US cinemagoers, but hopefully Oscar success awaits. Age isn’t withering Spielberg; the 75-year-old director is on fire.

A Venice prize-winner, Alice Diop’s portrait of black mothers under pressure is as powerful and nuanced as Toni Morrison’s masterpiece, Beloved. Pregnant novelist Rama (Kayije Kagame) attends the trial of a Senegalese-born, France-based student Laurence (Guslagie Malanda), whose unattended baby drowned. Best known for her documentaries, Diop is making history (she’s the first black woman to represent France at the Oscars); at the same time as she deconstructs the way history is written. Both glacial and churning, her fictional debut is a triumph.

Sarah Polley’s wrenching, frequently hilarious adaptation of Miriam Toew’s book loves the sound of female voices. A community of Mennonite women discuss their options upon discovering that, for months, they were drugged and raped by male members of their sect. Claire Foy and Jessie Buckley are both superb, while Ben Whishaw, the only adult man we see up close, uses his milky mildness to excellent effect. Will the women stay or will they go? All you need to know: every move they make feels seismic.

Shazam! Fury of the Gods

The whole point of an extended universe is to create a reassuring sense that everything connects. Sheesh! Thanks to yet another kerfuffle at Warner Bros, nothing about DC now feels joined up, though new broom James Gunn is a genius, so hopefully the current chaos will lead to great things. In the meantime, this sequel should be safe because – aside from a small but crucial role for Gal Gadot’s Wonder Woman – it’s got very little to do with out-of-favour Zack Snyder and the Snyderverse. The plot is simplicity itself. Teenager Billy and his five foster siblings, who transform into superheroes when they say the word Shazam, are forced to take on the daughters of Atlas (played by Helen Mirren, Lucy Liu and Rachel Zegler). Can’t wait.

In which Dracula’s dogsbody, finally getting his own movie, set in modern-day New Orleans, is played by Britain’s Nicholas Hoult, with the woman of his dreams brought to life by Awkwafina. Where Nora Lum goes, I follow, so it’s merely a bonus that Nic Cage, who was born to play a brooding blood-sucker, has been cast as the Count.

Guardians of the Galaxy Vol. 3

The trailer for this Marvel threequel is a goofy joy that makes great use of Chris Pratt, who, I think we can all agree, was not at his best in Jurassic World: Dominion. Dave Bautista also looks on fine form, as fun loving sociopath Drax, and it’s good to hear that Maria Bakalova (such a scene-stealer in Borat 2) will be the voice of Cosmo the Space Dog. This really is goodbye from the gang, because director James Gunn has thrown in his lot with the DC extended universe. But there’s nothing like a decent send-off.

The latest Disney cartoon to get the live-action treatment, Rob Marshall’s candy-colured opus features new music from producer Lin-Manuel Miranda and stars 2-year-old actress-singer Halle Bailey as Ariel. Bailey has endured hideous trolling ever since the casting was announced. Here’s hoping she gets the last word and that the chemistry between her and Melissa McCarthy (doing her own singing, as witty witch, Ursula) lights up the screen.

Spider-Man: Across the Spider-Verse

A sequel to the animation classic Spider-Man: Into the Spider-Verse, which introduced moviegoers to Miles Morales and the pulchritudinous parallel worlds he’s able to swing through. Prepare yourself for a whole new set of Spidey-related characters, from electric-guitar-wielding Spider-Punk (Daniel Kaluuya!) to a pregnant Spider-Woman (Issa Rae!) And let’s not forget “Bombastic Bag Man”, ie Spider-Man, with a paper bag on his head. We don’t know if the character has any lines in the movie, but it doesn’t matter; just having him in the mix is a victory for madcap freaks and geeks.

As that title would suggest, Pixar’s latest cerebral romp is about the elements (fire, water, air and earth). And it’s a romance, which is a surprise as love is rarely the main dish at a Pixar feast. Anyway, girlish flame Ember and wet boy Wade collide in the Bronx-like Element City. Director Peter Sohn made The Good Dinosaur, which was good, but not great. Still, if the cute rather than cutesy trailer is anything to go by, he’s now in his element.

Indiana Jones and the Dial of Destiny

The fifth outing for Harrison Ford’s Indy sees him temporarily de-aged (for a 1944 flashback) and, in the 1960s, joined by his goddaughter Helena, played by Phoebe Waller-Bridge. In the trailer, the actress looks airbrushed to the max, but don’t panic. Director James Mangold (hand-picked by Spielberg) has said he’s based Helena on the Barbara Stanwyck character in screwball comedy gem The Lady Eve. Jean Harrington is one of cinema’s finest scamps and if Waller-Bridge is allowed to channel some of that wicked energy, this film will be a hoot.

Covid, Tom Cruise’s temper and an argument over a historic Polish bridge threatened to derail the seventh instalment of the spy franchise. But Cruise prevailed. The new film will involve him looking spectacularly youthful in shades and driving a motorcyle off a cliff. Lovely Vanessa Kirby is still on board and, in other news, Mark Gatiss has joined the cast. Hooray! This series has always had a sly sense of humour; the more comedians (Simon Pegg joined the cast in 2006) the better.

I’m deliriously excited about Greta Gerwig’s live-action take on the ultimate dolly girl. We know Barbie and her buff beau, Ken, are comedy gold (see the Toy Story franchise) and, as proved by Lady Bird and Little Women, Gerwig is a magical storyteller. With Margot Robbie and Ryan Gosling as the leads, plus support from the likes of Issa Rae, Emerald Fennell and Emma Mackey, the stage seems set for a po-mo treat that all sane humans will want to wig out to.

This sequel to the energetically spiky 2019 hit Captain Marvel reunites Brie Larson and Teyonah Parris, as Carol Danvers and Monica Rambeau. Apparently it works best if you’re familiar with the TV series Ms Marvel (I’m shamefully ignorant about Iman Vellani’s Kamala Khan, but will be remedying that shortly). Nia DaCosta’s Candyman sequel was bold and brainy. With her on board as director, the future of all three characters looks bright.

The second half of Denis Villeneuve’s homage to Frank Herbert’s ’unfilmable’ novel is fit to burst with young talent, not just Timothée Chalamet and Zendaya, but now Florence Pugh and Austin Butler (as well-connected connivers Princess Irulan and Feyd-Rautha). Reports, however, suggest Pugh isn’t happy with her scenes. Yikes! Part I charmed fans and critics. Fingers crossed Villeneuve isn’t about to snatch defeat from the jaws of victory.

An origin story about Roald Dahl’s Willy (tee hee). We knew Timothée Chalamet could sing (he warbled in A Rainy Day in New York) but in Wonka, which is practically a musical, he’ll also be dancing. Sally Hawkins plays Wonka’s mum and Olivia Colman will be doing something. Wonka was directed and co-written by Paul King, who made the Paddington movies. In other words, its delightfulness is all but guaranteed.

Aquaman and the Lost Kingdom

Industry sources say this is Jason Momoa’s last go as Aquaman/Arthur Curry. Still, if the sequel’s as successful as the original everything could change. Director James Wan is being tight-lipped about the plot, but Patrick Wilson and Yahya Abdul-Mateen II will be returning as hard to pin down malcontents Orm and Black Manta.

2023-01-03
Previous Post: Supporting a child with long COVID – tips from parents of children living with the condition
Next Post: Arsenal flop Nuno Tavares sparks huge brawl after kicking out at rival before trolling Montpellier fans in Marseille win