Family reunited with body of UN peacekeeper killed in Lebanon 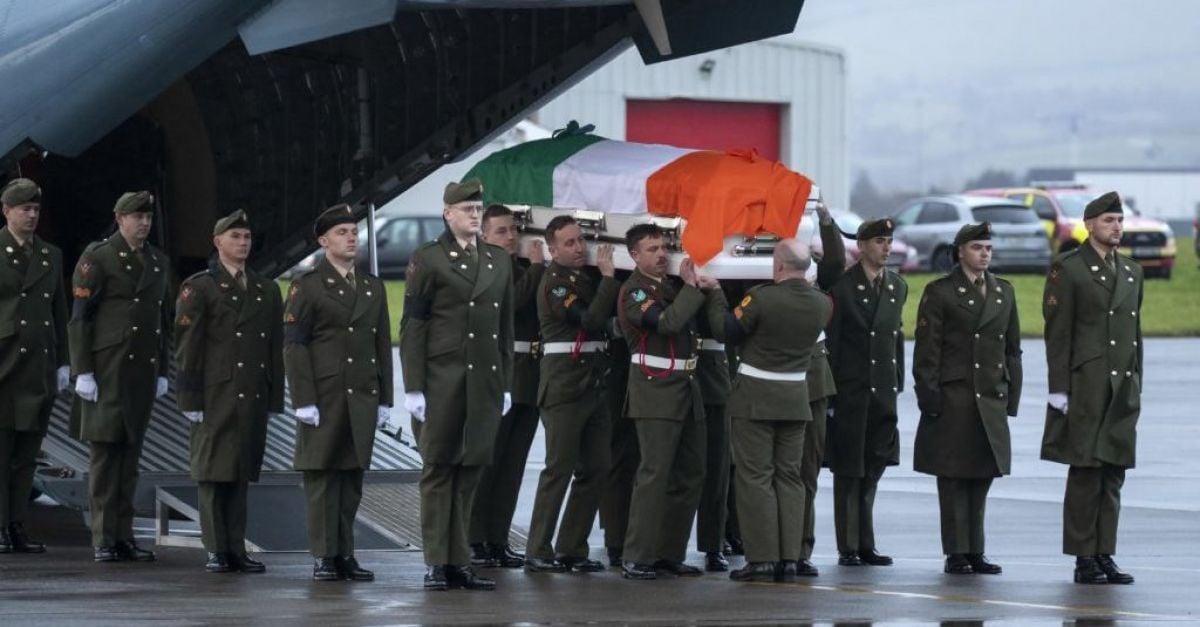 The body of Irish UN peacekeeping soldier Seán Rooney has been returned to his grieving family after being repatriated from Lebanon.

A member of the Defence Forces, Private Rooney, from Newtowncunningham, Co Donegal, was killed on active service when his convoy came under attack in Lebanon last week.

The 23-year-old’s remains left Beirut Airport on an Irish Air Corps Casa plane on Sunday afternoon after a solemn UN ceremony was held to honour the soldier ahead of his journey home.

Before leaving Beirut, Pte Rooney was awarded a number of honours posthumously, including a peacekeeping medal from the UN and an appreciation medal from the Lebanese armed forces.

He was accompanied on the flight by a number of his colleagues from 121 Infantry Battalion, including his company commander, who are understood to have never left his side.

At the Casement Aerodrome in Baldonnel, a white coffin draped in the tricolour was carried out of the plane by a number of pall-bearers.

Pte Rooney’s coffin was then marched to a nearby hangar, where he was reunited with members of his grieving family.

His mother, his fiancée, his mother’s partner, his grandfather and his three uncles, who have served in the Defence Forces, were among those present.

They were given time alone with the remains before a short prayer service was held.

Pte Rooney’s coffin was driven away in a hearse accompanied by a Garda escort shortly afterwards.

Pte Rooney’s colleague, Private Shane Kearney, from Killeagh, Co Cork, was seriously injured in the incident and remains in a serious condition in hospital.

Two other peacekeepers were treated for minor injuries.

The soldiers were part of 121st Infantry Battalion, comprising 333 Irish troops, which was deployed in November to south Lebanon as part of the United Nations Interim Force in Lebanon (Unifil).

On Sunday, Taoiseach Leo Varadkar reiterated his condolences to Pte Rooney’s family and friends and colleagues in the Defence Forces.

He said it is important to understand the circumstances of the attack.

Three investigations are under way: one led by the UN, another by the Defence Forces and a third by the Lebanese government.

Mr Varadkar said: “I would have confidence in those investigations to find out exactly what happened, why an Irish soldier lost his life and another was severely injured.

“But the main thing, I think, this week really is to stand with and express our condolences to Private Rooney’s family, his friends and colleagues because it’s been a long time since we lost a soldier in combat in Lebanon. But it does remind us how important that mission is.”

Mr Varadkar said the Irish peacekeeping soldiers’ efforts have allowed people “in that part of Lebanon for the last few decades to lead a relatively normal life, which wouldn’t be the case otherwise”.

“It’s an immensely valuable mission – over 40,000 Irish people have served there, which is extraordinary if you think about it – and one that we’re very committed to,” the Taoiseach added.

2022-12-19
Previous Post: Behind the scenes of Knives Out sequel Glass Onion: ‘It’s a rollercoaster ride not a crossword puzzle’
Next Post: World Cup 2022: who won the prize for ‘soft power’?