MANDY ROSE has assured fans that racy photos will continue on FanTime after being sacked by WWE for the sexy content.

However, the American bombshell was dropped on Wednesday due to explicit content posted on her fan account.

It is claimed bosses felt they were “put in a tough position” with some of the content on Rose’s page, which they deemed was outside of the parameters of her contract.

According to Wrestling Observer’s Bryan Alvarez, Rose was making “more money” from her content than as a WWE superstar.

And Rose’s final appearance with the professional wrestling juggernauts took place on Tuesday when she lost the NXT Women’s Championship to Roxanne Perez. 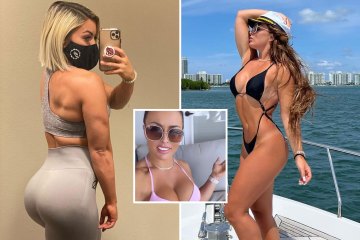 But due to her racy FanTime page’s success, Rose has assured fans that the sexy snaps will continue.

Rose wrote on her FanTime page: “Hey guys, thank you for all the messages.

“I am overwhelmed with all the love and support from you guys. And don’t worry the page is still up! ;)”

Rose recently posted intimate photos in the shower with her fiance, Tino Sabbatelli.

A video of her skinny dipping could also be watched.

2022-12-16
Previous Post: Ukraine recap: drones strike inside Russia while western sanctions get smarter
Next Post: Interest rates: why your mortgage payments are going up but your savings aren’t – and how better monetary policy could help