The White Lotus finale was peak TV — with a shocking finale 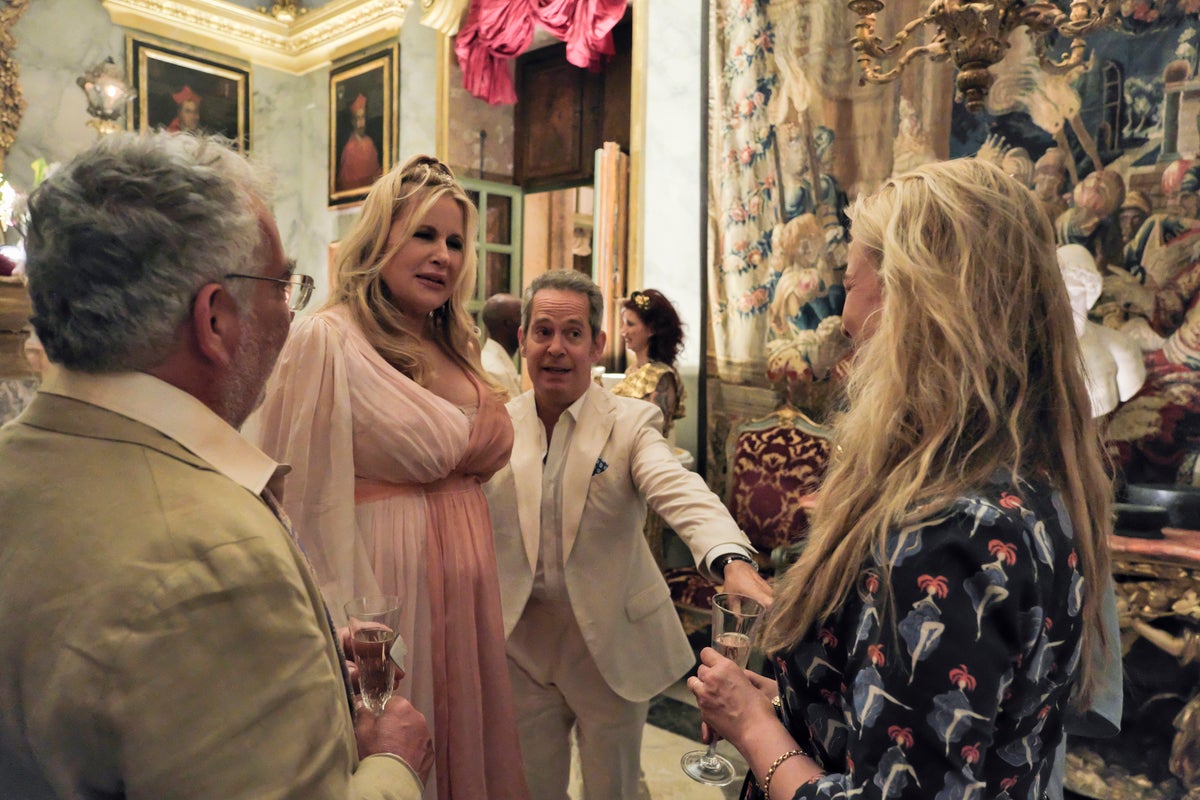 Making a TV show now is all about intertextuality. Which is a fancy way of saying, you need to throw some meat to the dogs in the chat rooms. Succession does this very well, with its Shakespearean allusions, literary quotes and cliffhangers. Twin Peaks: The Return was so challenging in its layers of unexplained mystery that it was a no-go to anyone but the most dedicated of nutcases. Line of Duty became so heavily reliant on teasing who ‘H’ was, that it set itself up for grand disappointment when it was finally revealed.

The White Lotus may not have captured mainstream attention in the way that Line of Duty did, but it has generated so much chat around its second season that it has evoked opinions from people who haven’t even seen it. More to the point, it has demonstrated a kind of new kind of peak TV, where the show is used to stimulate conversation as much as be actually watched. It makes for a less passive experience, and is another sign of the social media-fication of everything. You must interact! Share! Speculate! Opiniate! Which is, of course, all manner of fun for fans and haters alike.

What’s all the fuss been about? Well, season two has been an outright whodunnit, in contrast to season one. It was designed to keep you guessing about who would die and who would kill that person. All was finally revealed in episode seven, and it was certainly a surprise to see how the storylines resolved themselves; also, a little disappointing. Given all the attention online, it was always going to be. More to the point, creator Mike White, like Twin Peaks’ David Lynch, wants to mess with audience expectations and gazump you. It is very knowing, cool, and smart, but also could be considered a little cold.

For all the meaningful mythological paintings on the walls that seemed to watch the action play out, and the atmosphere of a set of tragedies dovetailing into fruition, in a kind of collective Icarus tale of the rich flying too close to the sun… well, it didn’t quite deliver on that dramatic sweep. Life doesn’t tend to go that way.

Instead of a crime of passion, a punishment for moral transgressions, the body that turned up on the beach in episode one turned out to be Tanya. Tanya! This was gutting for fans, but Jennifer Coolidge’s beloved character really did go out with a bang.

It turned out that Quentin (a chillingly brilliant Tom Hollander) and his “high-end gays” were not so high-end at all and were going to kill her for her money, with the help of Niccolo, the mafia party boy. Tanya realised this after a phone call with Portia while she was aboard Quentin’s yacht. “These gays, they’re trying to murder me,” she whispered to the uncomprehending Italian captain of the boat.

Quentin wanted Tanya to go ashore in a dinghy with Niccolo after a dinner — a last meal. But instead, Tanya grabbed Niccolo’s bag and locked herself in one of the bedrooms. Inside, she found rope, duct tape and a pistol. She was right (and so were the chat rooms, which had been on to this conspiracy for several episodes). What came next? Well, an unexpected Taxi Driver-style sequence in which Tanya gunned down Rocco, Quentin and one of the others. How did the generally clueless Tanya manage to work the gun, never mind assassinate three people? Not sure. But it did provide a priceless moment as she asked the dying Quentin, “Is Greg having an affair?”

Such a question about her husband — who seemed to be in cahoots with Quentin and who is perhaps the ultimate victor of the show, since he’ll be inheriting a fortune — was brilliantly beside the point for the ever-neurotic Tanya.

Then came the moment. Tanya tried to escape the yacht by jumping onto the dinghy tethered at the side — er, surely there’s a ladder down, Tanya? — but instead tumbled forward, banged her head on a metal railing, and drowned.

The foreshadowing at her night at the opera with Quentin watching Madame Butterfly, the story of a woman who killed herself came true — although, in the most absurd way possible. Creator White has said of this ending: “I just think her dying at the hands of someone else felt too tragic. It felt like she needed to give her best fightback and that she, in a way, had some kind of victory over whoever was conspiring to get rid of her. It just made me laugh to think like she would like take out this cabal of killers and after she successfully does that, she just dies this derpy death and that’s so Tanya.”

It was undeniably an amusing way for her to go out, but it wasn’t quite operatic. It had a certain poetry and comedic arc, and the sight of Tanya floating in the water in the pink dress was haunting — but it packed little emotional punch. Tanya has always been funny and ridiculous as a character, so the ending was fitting, but you didn’t feel the weight of it. Nor did the other characters, particularly Portia: when she eventually learned of it, via Albie at the airport, she basically shrugged it off.

Curious really, for such a dramatic death of everyone’s favourite character to be oddly unaffecting. And perhaps not a failure of the show but a continuation of its meditation on the fantasies people create for their lives which allow for a death of effect — and which the rich can maintain with particular ease.

This makes for fine viewing, with all the glamour and bad behaviour and downright sexiness of these people who want to revel in, and be seen as part of, the high life. But it also makes for slightly removed viewing because nothing really changes for these people. The fantasy wins out over what has happened. This makes it a little unsatisfying for viewers, as individual traumas simply become assimilated back into the characters’ lives when they check out of the hotel.

So we have Albie not being able to escape into true love with escort Lucia — she was, of course, using him to get some ‘rescue money’. Instead, he was left stuck in his genetic destiny at the airport, following his father and grandfather in checking out a passing hot girl, becoming just another one of those men “hard-wired” to be continually compromised by sex. As Bert put it, “Our Achilles’ heel is an Achilles cock”.

Then there are Cameron and Daphne and Ethan and Harper, the couples at the centre of the show, who appeared to be the most likely to have a tragic end. The finale knowingly teased the audience’s expectations here with a fight in the sea between Cameron and Ethan that didn’t turn into the drowning of either that many had anticipated. Ethan had found out that Cameron had indeed made a move on his wife and that Harper had resisted but kissed him. Not much, but as Ethan stated, “he still tried to f*** my wife.”

The possession of his property by another man! The transgression over the line of social boundaries! No matter that Ethan is left cold by Harper, and makes no attempt to sleep with her — if another man tries to sleep with her, then that is intolerable! It blows the illusion. And indeed, by bringing it out and coming to blows with Cameron, something is released. He goes on to talk a long walk with Daphne, where in all likelihood they had their own dalliance as payback for the others. Jealousy thereby sated, Ethan and Harper finally have sex and end the series apparently closer than ever. Cameron and Daphne, well practised in this, are still united.

There was a priceless moment after all the drama between them had transpired, where Cameron and Daphne spotted the other couple at dinner — and came straight over! Proposing a toast, being friendly, just gaslighting the entire experiences all of them had endured. Well that’s one way to solve your problems: simply pretend they never happened. Maintain the fantasy.

This in itself is a kind of tragedy. One which was acknowledged but also defended in perhaps the key scene in the episode when Ethan bumps into Daphne on the beach before they take a walk together. Fresh from confronting Cameron about trying it on with Harper, he decided to tell Daphne about it. We already knew Daphne had adjusted to Cameron’s infidelities with her own coping mechanisms of treats and affairs. But here, in a masterful piece of acting by Meghann Fahy, she seemed rocked by Ethan’s revelation but then rallied and said to him, “We never really know what goes on in people’s minds or what they do…you don’t have to know everything to love someone…I think you just…do whatever you have to do, not to feel like a victim of life.”

And there it is: to not give yourself up to victimhood, you create your own version of your life. Even if it’s just a fantasy. There’s a resilience here to not be defeated by the trappings of a conventional life but also ultimately something tragic. Is that all that there is for us? To find consolation in delusion?

And this is why the series is a very different beast to say, Succession, that other story of the obscene rich. Succession really does go for those big highs and lows, where the weight of the action wreaks emotional damage on the people involved. Not so at The White Lotus, which operates on a more comedic level and perhaps also a more cynically amused one: is life just about working out a delusion that works for you? Are our personalities just one big coping strategy?

The White Lotus season two has been a fun ride of peak TV viewing, but it’s ultimately a brutal ride.