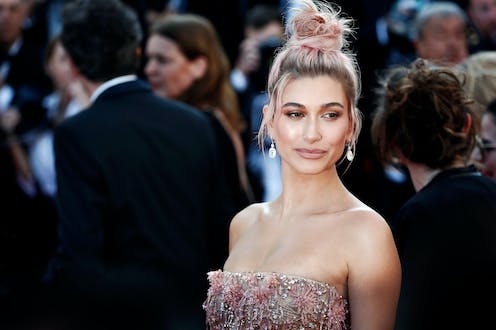 Model Hailey Bieber recently revealed that she’s been suffering with an ovarian cyst the size of an apple.

While we don’t know exactly how many women suffer with ovarian cysts, they are thought to be relatively common – with estimates suggesting around 7% of women will suffer from an ovarian cyst at some point in their life.

But these numbers could be even higher, as not all cysts present symptoms. For example, based on data from CT scans, it’s believed that between 6%-18% of premenopausal women have a cyst that they don’t even know about.

There are two main types of ovarian cysts: simple and complex. Both grow on or inside one or both ovaries. Simple cysts are filled with fluid, while complex cysts often contain other substances – such as blood or cells. Complex cysts are rarer, but are associated with an increased risk of cancer. These can vary in size, with guidelines suggesting they can be up to 5cm in diameter without symptoms or need for treatment. Giant cysts, which measure more than 10cm in diameter, can also happen.

While some cysts go away on their own after two to three menstrual cycles, others may need to be surgically removed.

Ovarian cyst symptoms vary from person to person but typically include pelvic pain – which can also vary in intensity, from dull pain to sudden, sharp pain which gets worse during the period. Cysts can also cause frequent urination, difficulty emptying the bowels, as well as discomfort or pain during sex. It can also change the menstrual cycle alongside menstrual flow.

As part of the normal menstrual cycle every month, a follicle (a cyst-like structure) develops on one of the ovaries. This is where the egg will develop. The follicle also produces hormones that prepare the uterus for implantation, if the egg is fertilised by a sperm. Once the egg is mature, the follicle releases the egg into the ovarian tube – a process known as ovulation. But in some instances, this release of the egg fails and the follicle/cyst persists and may continue to grow.

There are a number of factors that can increase the likelihood an ovarian cyst. Fertility treatment, for example, can cause a woman’s ovaries to develop more follicles at once, increasing the potential for cysts. Surprisingly, getting your tubes tied is also associated with an increased risk of developing ovarian cysts. But taking the oral contraceptive pill, which prevents ovulation, actually decreases the likelihood of ovarian cysts.

Hypothyroidism can hyper-stimulate the ovaries, which may have a similar effect as fertility treatment in that it causes more eggs to be produced. These may turn into cysts if they’re not released.

Pregnancy can also increase the chances of ovarian cysts. Certain hormones peak during the second trimester and these can lead to an increase in the presence of cysts. It’s also potentially more likely that cysts will be identified during pregnancy because of routine ultrasounds.

Smoking is another factor that may increase the likelihood of developing ovarian cysts. Studies have shown that smoking alters hormones linked to the menstrual cycle.

And finally, the condition polycystic ovary syndrome can also result in women developing multiple cysts in their ovaries. But the diagnosis for this condition and treatment is different to ovarian cysts.

Cysts typically remedy themselves and do not need any treatment. However, large cysts on the ovary can cause ovarian torsion, where the weight of the cyst causes it to pull the ovary down in the pelvis, twisting the fallopian tube and cutting off the blood supply to the ovary and surrounding tissues.

Having an ovarian cyst is the biggest risk factor for ovarian torsion. So, if a cyst is of substantial size or causing symptoms, surgery may need to be performed to remove the cyst. This is done by making small incisions in the body wall, near the belly button.

If the cyst is too big or there are complications, it may be necessary to remove the entire ovary.

But before treatment can happen, doctors will need to determine whether symptoms are caused by ovarian cysts. Many other conditions – some of which can be life threatening – can present in very similar ways.

For instance, endometriosis can cause symptoms that also appear similar to ovarian cysts. However, endometriosis pain is usually chronic, and typically becomes worse with a person’s period – whereas cyst pain can come on suddenly and severely. Though endometriosis can also cause cysts, these are known as endometriomas (chocolate cysts), which are filled with menstrual blood.

Tubal pregnancy, the most common type of ectopic pregnancy is another example. This is when the fertilised egg implants into somewhere that is not the uterus, such as the fallopian tube. Early in a tubal pregnancy, it can cause similar pain symptoms to ovarian cysts. Doctors may need to administer a pregnancy test or ultrasound to determine whether symptoms are caused by cysts or not.

While ovarian cysts typically go away on their own, there are some instances where they become so large that they’re life threatening. For example, a woman in New York needed to have a 32kg (70lb) cyst removed after it began to crush her lungs and put a huge strain on her heart. Similarly, in India a woman had a 23kg cyst removed. Both of these combined don’t come close to the 148kg cyst that was removed from a woman in 1905 and contained 40 gallons of fluid that took seven days to drain.

Thankfully these huge cysts and the problems they bring with them are very unlikely to happen these days as we have much better ways of detecting these kind of abnormalities before they cause harm.

2022-12-05
Previous Post: Cyborgs v ‘holdout humans’: what the world might be like if our species survives for a million years
Next Post: His Dark Materials season 3 on BBC One – behind the scenes as the epic adaptation draws to a close